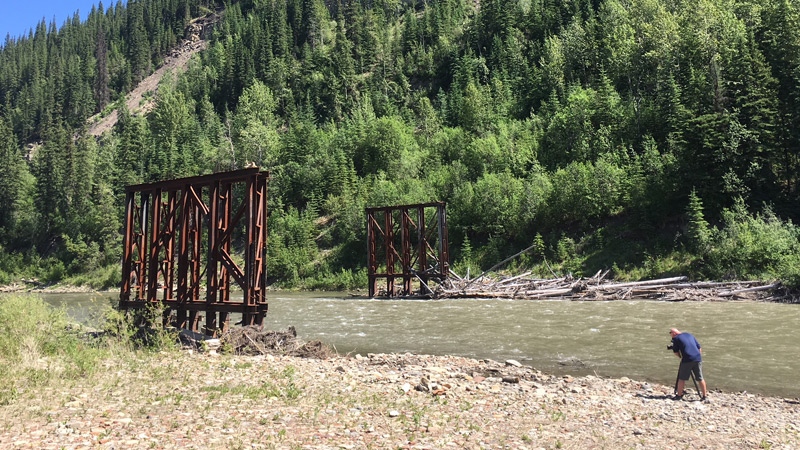 I awake to a notification on Instagram. "@daveanddandrivealaska has followed you on Instagram". The problem, it seemed, has been solved by Dave just making a new account/handle by rearranging our names. This caused mass confusion amongst our dozen or so followers. We gassed up and hit the highway, bound for Liard River Hot Springs. I should note at this point that while we are following an itinerary, we are booking hotels/lodging on the fly, as we aren't 100% sure how each day will shake out. Our goal on this day is to make it to Liard River Hot Springs, a mere 758 kilometres away.

We're out of Dawson Creek like a bullet! Nothing but the open road and endless advent: TRAFFIC. CONSTRUCTION. It's a thing out here, too. So, it was pretty slow going early on as repairs were underway on the single lane highway. Once we were through the orange signage, it was pretty smooth sailing all the way to Fort Nelson, B.C. The scenery along the way is pretty, but nothing Albertans or British Columbians aren't used to at this point. We did stop at one particular lookout and snap a few photos. One point of interest we pulled off for was the Sikanni Bridge (spelling might be off here). It was built by African American soldiers in a record 86 hours (give or take) in 1942 as part of the original Alaska Highway. It was destroyed by fire in 1992 (a gas station attendant named Bryan Roberts showed us a framed photo of the bridge engulfed). We ventured down to where that photo was taken and found a picturesque spot...but with just two trusts standing in the nearby river and you can still see some charred wood bolted to them.

I just want to reference the gas station again where gas was $1.70/L, amongst the highest prices in the country. Two young American women from Washington State came to fill up and were befuddled by the old style pump and the price per litre. I asked them if they've ever paid so much for gas and they said they thought it sounded cheap because it was only in litres and in Canadian dollars. Little did they know, they were paying almost 7 dollars per gallon.

As we head north, the scenery begins to gradually change. The mountains come into view as does the wildlife. It's not long before we spot the first black bears and mountain goats. Later, a beautiful brown bear was rummaging for food in the flowery ditch and took a little interest in Mitchee, who was shooting (with the camera) from the highway. Muncho Lake Provincial Park provides the most photogenic views to this point as we pull into the Northern Rockies Lodge (about a half hour from Liard River), founded by a Swiss man named Urse. We decided to call it here for the night as it was already 9 p.m. We had a couple schnitzels and met a retired Las Vegas police officer named Joe. Joe said he was travelling by motorcycle from Nevada to Prudhoe Bay on the Arctic Ocean. Even he wasn't positive he'd be able to get that far. Joe isn't a huge hockey fan, but he has been to one Golden Knights game and he was pretty sure it was against the Oilers. Nice and generous fella. He bought us each a beer and we were off to sleep. Before bed, Dave wandered down to Muncho Lake and took some pretty photos of the docked float planes at what was a still lit 23:30 dusk. Dave calls it one of the most peaceful places he's been.