Scenic route to Alaska: Days 3 and 4, Haines Junction to Fairbanks 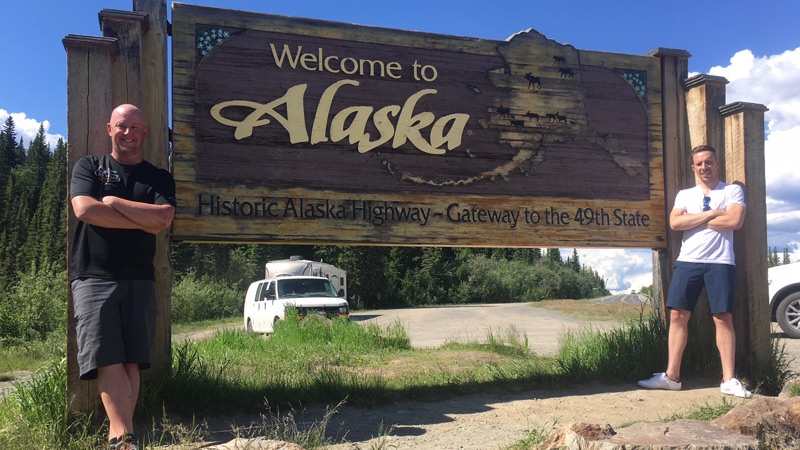 Videographer Dave MItchell and reporter Dan Grummett pose at the entrance to Alaska.

Greetings and salutations from the Alaska Highway. Boy, have we driven, seen, and done a lot since our last update.

We last left off leaving Watson Lake, YT bound for Whitehorse. That drive was not the most scenic Yukon has to offer, but nonetheless beautiful. I seem to recall Snapchatting from a lookout over Teslin, a spot with a bright white bridge and river. 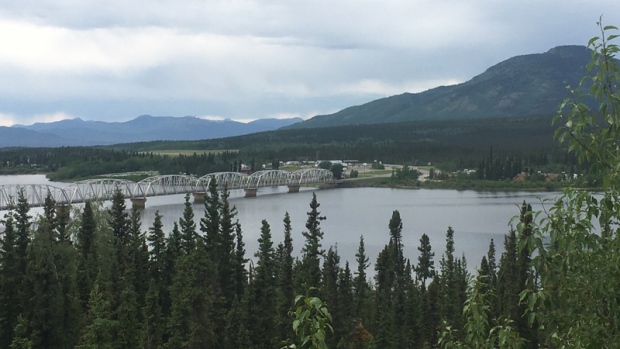 Mostly, we were motivated to get to Whitehorse after a long day of travel. Mitchee and I passed the time listening to Sirius XM radio and (sometimes) my own Apple playlists (Mitch not a big fan of my hip hop one). It was getting near 8:30 p.m. as we approached Whitehorse and we wanted to eat at the famous Klondike Rib & Salmon restaurant. Google told us the place closed at 9. Dave decided to call to see if we could be served this late. On speaker phone the rang echoed in the Durango. A woman picked up "Klondike Rib and Salmon! Riley speaking!" He opened with an awkward "HOW ARE YA?" in a sort-of southern twang. The silence that immediately followed hung in the air longer than Dave's underhand slo-pitches. "Good," the woman responded, "How can I help you?" Dave explained our situation. Riley said we were in luck. They don't actually close until 9:30. She'd save us the next available table for 2. When we arrived, we promptly ordered the 'House Special.’ 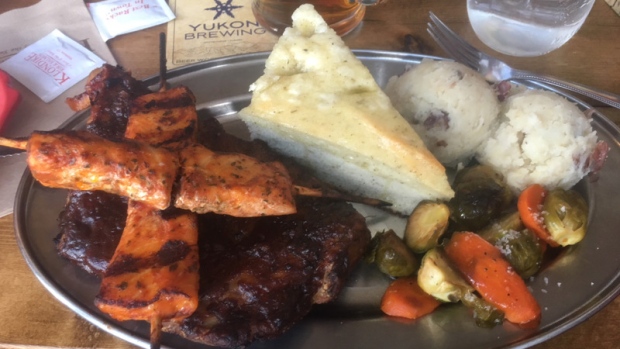 We couldn't spend much time in Whitehorse as we had a hotel reservation in Haines Junction which was about an hour and a half away. We chose the Glacier View Inn as all other places but one were sold out and that 'one' wasn't pretty. The reviews weren't great but it was cheap and we weren't staying long. It was nearly 10:30 p.m. after we gassed up and took a scenic shot of Whitehorse and we suddenly pondered what time the motel closes at (the place in Muncho Lake had told us check-in was no later than 11:00pm. Would this place, the Glacier View Inn, do the same?). Our Booking.com reservation didn't mention anything about a check-in deadline so we felt we'd be okay. The next 90 minutes were tough: tired, bellies full of food and light fading on what was pretty much a gravel road. Dave had to battle at the wheel but, hey, at least we had a couple beds waiting for us at the end of the rainbow!

We rolled into Haines Junction (virtually a one mile street lined with gas stations and motels) just after midnight. By this point, we are so ready for soft beds. The Glacier View Inn was one of the first hotels on the right. It's still light outside at this point but there was ZERO light at the motel. Dave checked the side of the motel, which we thought was the office. A sign read: "OFFICE RESTAURANT THAT WAY" and an arrow. The restaurant location was obvious but darkened. I knocked on the door anyway thinking the motel proprietor may live there. No answer. Then I spotted a house just beyond the restaurant and the lights were ON. Nice! The hotel owner must just be in there waiting for us! I went and knocked on the door. An older man came to the door, peeked out the blinds, and looked at me. I waved and smiled, hopeful that this man would be the key to our hotel dreams. He promptly disappeared back inside his house. There was an opening between his windowsill and blind so I crouched down to see if I could see anything. There was the man, just sitting on his couch watching TV. I'm not sure if this man was with the hotel, but either way, he wasn't going to help us. We were going to need another hotel. We drove further into Haines Junction and noticed everyplace was dark and closed. All except one. That 'one.’ The Kluane Park Inn. Dave ran inside to ask if we could rent a room. ONE left. We were relieved. It wasn't the Four Seasons, but it worked. 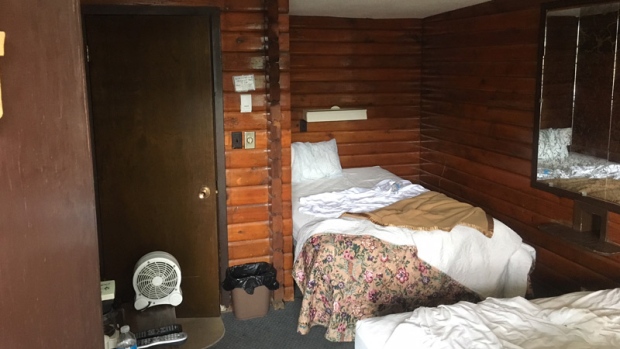 We awoke in Haines Junction roughly 8 hours after our arrival. We decided to skip whatever this place was offering for breakfast and grabbed some banana bread and coffees from the gas station across the highway. Our destination today: Fairbanks, Alaska. I'd lined up interviews for Friday in Fairbanks that wouldn't be possible on the weekend. So we needed to wake up there. Google lists it being a 9.5 hour drive or nearly 800 km. The good part is, this particular part of the drive in Yukon is absolutely stunning, particularly Destruction Bay. There's a scenic view point overlooking a dusty island that I'll never forget. Kind of wish we had the time to stop there. 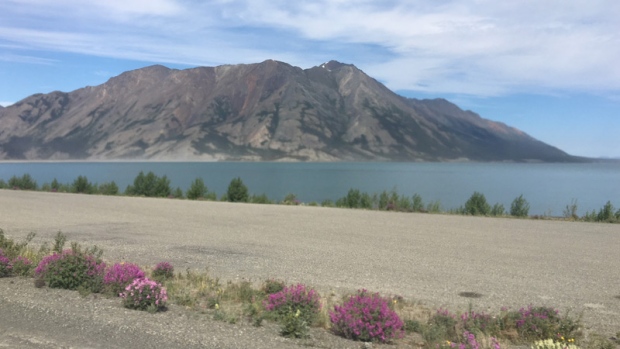 We carry along towards the Alcan border. The final stop before Alaska is Beaver Creek which bills itself as 'the most westernly place in Canada'. We stop at a roadhouse called 'Buckshot Betty's' thinking this place might have some character. It did not disappoint and you'll see what I mean in the story on CTV.

We also met a group of motorcyclists from Texas. They had ridden their bikes from near Amarillo all the way up to the Arctic Circle and were now on their way back. It’s crazy the amount of gear they had packed with them on the bikes. Dave did some GoPro stuff with them and sent them on their way.

We drove up to the Yukon/Alaska border and took some photos for/of people who had stopped including a nice couple from Munster, Germany (lots of Germans doing this stretch because of a direct flight between Frankfurt and Whitehorse, apparently). 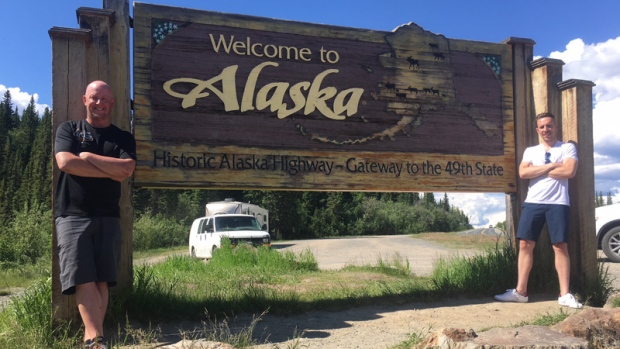 We crossed U.S. Customs with ease and were finally in Alaska! The road was a little rough here out of the gate. At this point, I jammed to some of my rap tunes while Dave caught some z's. We stopped at an outpost/gas station in Tok to fill up. Walked inside and immediately knew we were definitely in America. 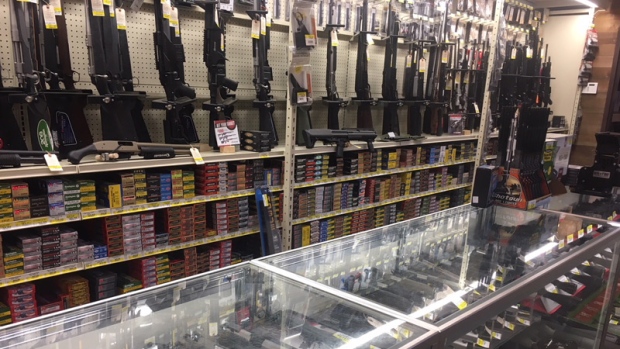 We carried on past Delta Junction and milepost 1422, despite it being the official end of the Alaska Highway. We knew we would be back and were trying to get to Fairbanks for a Midnight Sun Baseball Game with special guest Billy Bean, a former member of the Alaska Gold Panners before jumping to the majors. I contacted a communications person with MLB to ask for access to the game and to meet Billy, MR. MONEYBALL himself. She said absolutely. Dave and I were pumped. So, we blew through Delta with the intention of stopping on the way back.

After a few more miles we encountered a U.S. Army convoy on the Highway. An excited Dave grabbed his digital camera and began snapping away. 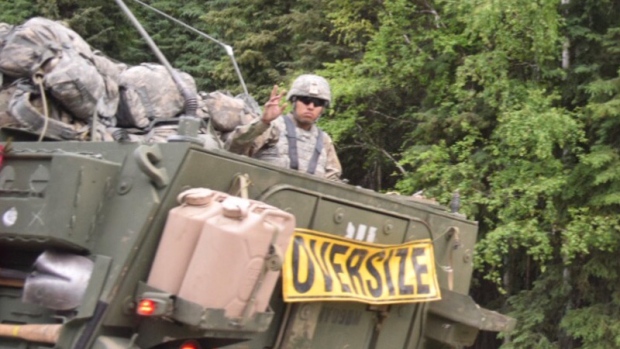 They were likely heading back to Fort Wainwright Army Base in Fairbanks, which meant we were close. Further up the road, we passed The North Pole. An actual town devoted to everything Santa Clause and his reindeer. Tourists stop to take pictures with them and all the light standards are painted like Candy Canes. The kid in me thought it was kind of neat, but mostly we agreed it was super creepy.

About 20 minutes later, we'd done it! We made to Fairbanks! It's not exactly a city that 'greets' with spectacular scenery as you approach. The city is actually pretty spread out and has no noticeable downtown on its skyline like, say, Edmonton or Dubai. We had about an hour until the baseball game, so we checked into the hotel and cleaned up, as we did not want the man who was played by Brad Pitt to be revolted by us.

Around 9:30 Alaska Time, we drove down to Growden Park. It was an old-fashioned diamond with metal bleachers lining each baseline. It was a little run down but had a certain charm. On the plus side, it was packed with fans. The Midnight Sun game is a tradition going back 113 years. There's so much sunlight that they don't even need to turn on the lights. We made contact with the MLB rep who escorted us to field level where Mr. Bean would be throwing out the ceremonial first pitch.

When we saw him as he talked on the mic to the crowd, Dave remarked that he thought Billy Bean was taller and older. Billy threw out the pitch and afterward we were introduced to him. We mentioned we were from Edmonton and he told us that he won a PCL title in 1985 in Edmonton while playing with Albuquerque. He mentioned how he loved playing in Edmonton and that it had 'great people and great hockey fans'. We took some pictures with Billy Bean and bid farewell.

We then went up to the pressbox so Dave could grab a wide shot of the diamond. It was at this point, while trying to tweet something about the game and its special guest, that we realized something very important. This was not THE Billy Beane. This was not Mr. Moneyball. This was Billy Bean (no 'e'). The Billy Bean we met was a completely different person. He was a former major leaguer and now an exec with MLB, not the VP of the Oakland Athletics. We were embarrassed of ourselves, but also had a great laugh about it. Thankfully, we hadn't said anything to Billy Bean to make him think that WE thought he was Billy Beane. We also bumped into some other members of the media. A sports guy named Aaron worked for the local CBS affiliate. He gave us a shoutout on Twitter along with what may be the worst photo ever taken of us. 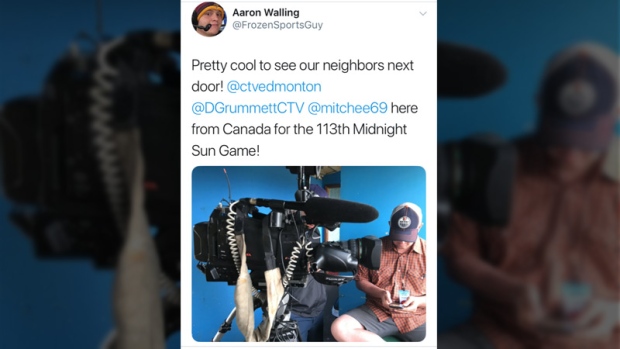 Obviously, he didn't want to show our faces. Everyone we met at the game was nice and obviously curious about what a news crew from Edmonton was doing there. Even we weren't completely sure. We bumped into the team President on our way back down from the press box who asked if we were staying for the whole game. We couldn't lie. We needed to eat. At that point we realized we had only that banana bread and a clubhouse sandwich since our meal in Whitehorse the previous night. We were running on fumes, a situation completely of our own devise. We went to a place called the Red Fox and had some salads and pizza. Someone was playing country tunes non-stop on the Touch Tunes Jukebox. Dave was hell-bent on getting some Tragically Hip going. But this jukebox connects to an app that allows the user to 'Fast Play' or essentially pay more to keep their songs at the top of the queue. No matter how much money Dave plugged in, he couldn't seem to get a song played. Eventually we figured it out, and New Orleans Is Sinking rang out through the bar. No one cared except us. We drove back to the hotel, parked in the lot, and slept.