EDMONTON -- An Edmonton man has been charged in the killing of a seven-year-old girl Monday night.

David Michael Moss, 34, is accused of second-degree murder in the death of Bella Desrosiers, police have confirmed.

A stabbing was reported to police shortly before 9 p.m. on Monday. Bella died at her home in Mill Woods.

While police did not identify the man they had taken into custody, the girl's mother called him a family friend who had been struggling with his mental health.

Melissa Desrosiers told CTV News Edmonton the man had seen a crisis team but missed his appointment. With plans to take him to medical professionals the next day, she said she offered him a place to sleep Monday night.

Desrosiers did so with the encouragement of her daughter; Melissa says Bella even drew him a picture to cheer him up. 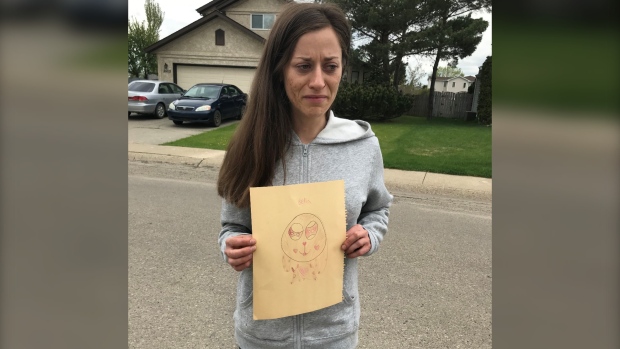 According to police, Bella was stabbed in front of her mother.

Officials say she tried to intervene, called 911, and attempted CPR until paramedics arrived.

Moss, a known local tattoo artist, was arrested at the home.

None of the allegations against him have been tested or proven in court.

7-YEAR-OLD REMEMBERED AS SOULFUL AND COMPASSIONATE

Desrosiers says one of Bella's last acts – welcoming their family friend into their home – was symbolic of her caring and compassionate nature.

"Her being was all about heartfelt sincerity. She was always humming and singing her own soul-filled lyrics around the house. Everyone who knows Bella has received her artistically unique drawings, which are heart, star and sun-filled. Lots of rainbows too. She was always teaching her sister with her compassionate, loving charm," the mother said in a public statement Wednesday.

She added the seven-year-old had taken after her father, Ben, who died by suicide last July.

"We are so proud of the amazing resilience she had in coping with the loss of her father last July. She did this by using her honest, vulnerable and empathetic nature with everyone she met."

Dozens of stuffed animals have been piled at the base and in the nook of a tree at the Desrosiers’ home in south Edmonton.

Flowers have also been laid at the memorial, and two heart-shaped balloons. 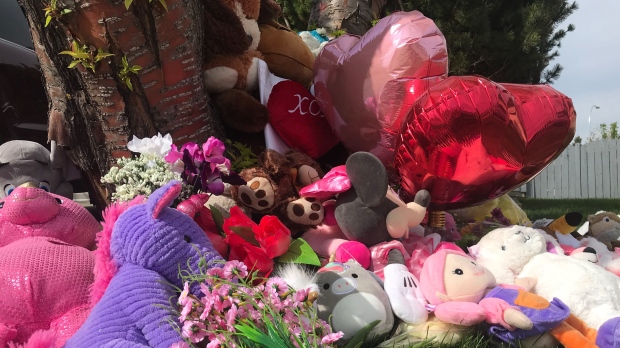 Neighbours told CTV News Edmonton that Bella will be well-remembered from the block barbecues the family attended, an annual lemonade stand fundraiser for the Stollery Children’s Hospital.

Desrosier asked her community practice greater love in honour of her daughter, and patience in their grief.

"If we allow ourselves to find meaning, it will allow us to transform our grief into something else. Something rich and fulfilling. Finding meaning doesn’t mean understanding, but rather finding meaning unlocks and empowers us to find a path forward," Desrosier said.

"Hold your loved ones tighter and bring love into all that you do."

A GoFundMe set up to support the family titled "Bella's big heart" was launched Wednesday and raised more than $5,000 in just four hours.

The money raised will be turned over to Desrosiers, who will donate proceeds to charities "who have the same passions Bella had" and which have supported the family in both losses, including Zebra Protection Services, Pilgrim Hospice, Companion Welfare Animal Society and Meika's Birdhouse.