A north Edmonton family is saying thank you to their community after a teen was given a basketball, a hoop and a gift card to Sport Chek.

Anthony Muobike spent a lot of his free time practicing dribbling and air shooting in his driveway, but he didn’t have a basketball net.

On Aug. 15, Ian Ray, one of Anthony’s neighbours, put a post on a north side community Facebook group asking if anyone had a spare net to donate to Anthony. He said several people offered nets and others offered to donate cash to buy a new one.

“I didn’t expect it to blow up like it did, but the north side is a pretty strong community,” said Ray.

Eventually, Canadian Tire offered to donate a new basketball net and the money went towards getting a Sport Chek gift card for Anthony.

“He’s a good kid… he’s never caused any trouble or anything like that, so it’s nice to get him something like that. He deserves it.”

On Monday, Ray surprised Anthony and his mom with the gifts.

“I was absolutely surprised… I thought when I came out here to dribble that ball it was making a racket and people would hate it,” said Anthony. “To find out, I don’t know how many, probably a lot, of people are believing in me and they give me this… that really touches my heart.”

“I’m still trying to process it, I’m speechless,” said Leticia Muobike, Anthony’s mom. “Thank you so, so much to everyone who thought about this, who have helped in any way.” 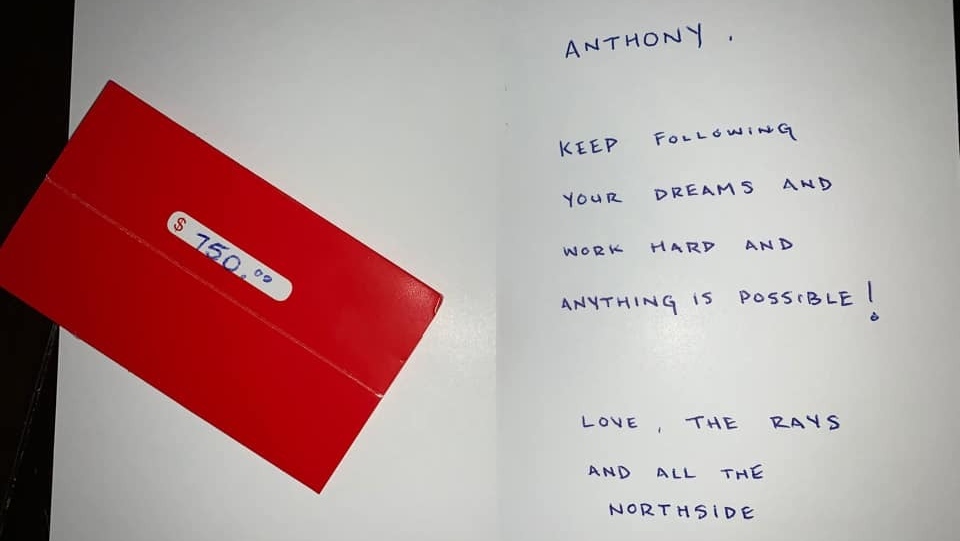 Anthony is only 14 but his dream is to play in the NBA.

“You’ll see me out there, in the NBA, that’s where you’ll find me,” said Anthony.

“Now he can practice at home… he told me yesterday, ‘Mom, I’m going to make you proud,’” added Leticia.

“He didn’t sleep last night because he was coming downstairs to check if the hoop was still there.”

The net was put together Tuesday and Anthony and some other kids from the neighbourhood were enjoying shooting hoops.

“My kids are in sports, I know how important sports are to kids… if he’s got a dream, he’s going to chase it… all the power to him. Good luck,” said Ray.