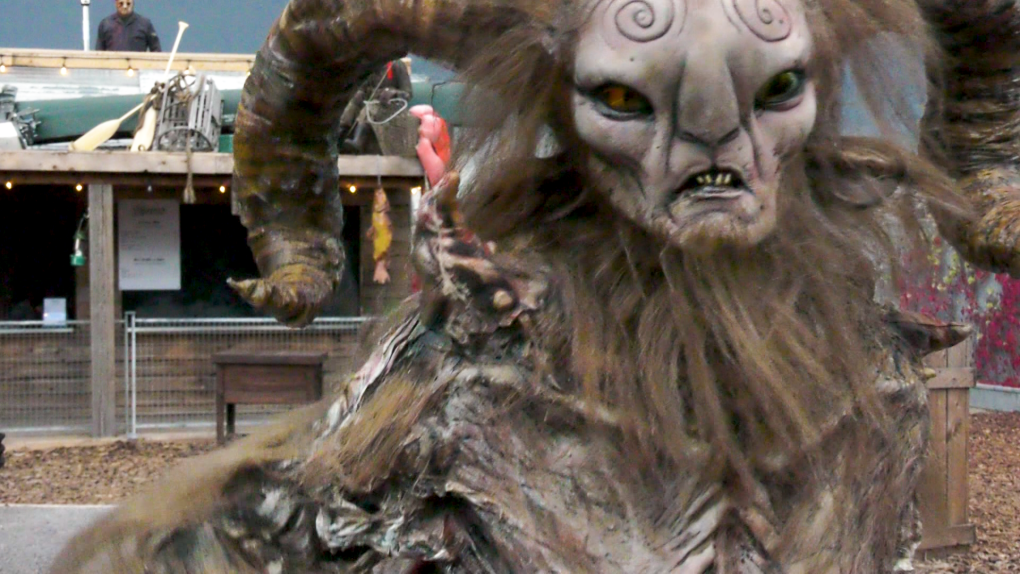 One of the monstrous residents of Deadmonton for this year's haunted house. Friday Sept. 23, 2022 (CTV News Edmonton)

A chill is in the air, and it's not just from the onset of fall, as Deadmonton, one of Edmonton's most popular haunted house attractions, opens for another spooky season.

"The scariest experience that I've found in Edmonton," said Rupert Appleyard, an actor manager at Deadmonton.

"It's an incredible place, there's a real passion that drives this place and so we've got some really cool actors that are going to come out and scare you."

Deadmonton is a yearly attraction with two different haunts, as Appleyard puts it. This year's scares come in the form of Icons of Darkness and Return of the Living Dead, a New Orleans-style outdoor cemetery.

"Some people really enjoy going through the outside, it's a really different atmosphere and the creatures you see out there are different," said Appleyard.

"In here though, there's something really special about the sets that have been built and I think people are really going to enjoy the creatures they meet here this year, there's some special ones, you can hear one now," he added as screams echoed in the background.

There is also an outdoor common area known as Camp Deadmonton, with food and drinks.

This will be the last year for Deadmonton at its current location. Appleyard couldn't tell CTV News Edmonton where they were moving to, or our crews wouldn't have been able to ever leave the haunted house.

"The thing with making a haunt is every year Ryan, the owner, he changes things here and he's really outgrown this haunt, he's got big ideas and he needs somewhere to put those."

Work has been going on at this house since November 2021 to get it ready and around 90 actors have been working on their scares since July.

Deadmonton runs Thursday through Sunday from Sept. 23 to Nov. 5 and is also open the entire week before and night of Halloween. The haunted house opens at 7 p.m., but the outdoor cemetery doesn't open until darkness falls.

Lawyers for 'Freedom Convoy' organizers have won their bid to get access to unredacted versions of 20 documents at the Public Order Emergency Act.

The Q4 2022 earnings reports from Canada's big banks are showing signs that the Canadian economy is slowing down ahead of a potential recession, with some signs of optimism.

Hockey Canada says there were more than 900 documented or alleged incidents of on-ice discrimination across all levels and age groups during the 2021-22 season.

A Toronto-based mining company has been fined $300,000 for a workplace fatality that took place last year at Hemlo Mine near Marathon, Ont.