A Filipina mother who won an award for her work helping foreign workers in Canada now faces deportation next month, alongside her Canadian six-year-old daughter.

Evangeline Cayanan, known as Vangie, came to Canada in 2010 as a skilled worker through the temporary foreign worker program. After raising concerns about her contract and unsafe working conditions, Vangie says she was fired.

A year later she moved to Edmonton, where her daughter McKenna was born in 2015. She has been living without status since then, when her application for a further worker permit was denied.

Now that her mother is facing deportation, it means McKenna has to go too.

"She was abused by her employer and abused by a system that has abused many people and throws people away back to their home country just to bring in a new batch of people to do the same jobs," said Whitney Haynes, a family friend.

McKenna has been diagnosed with severe ADHD and other medical conditions, which Vangie says she can manage with the support of the community around her.

Her mother is concerned that if she is forced back to the Philippines, McKenna would face undue hardship and not have the same quality of life.

"My biggest fear right now is going back home bringing McKenna back to where I came," Vangie said. "It's so hard because on my daughter's condition there is no pre-access to medicare."

"She cannot even speak our language," Vangie added. "It's all new to her." 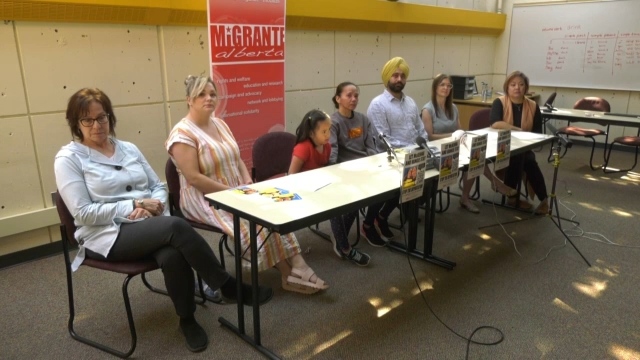 Vangie had previously filed applications to Immigration, Refugees and Citizenship Canada (IRCC) herself to gain status in Canada that were denied.

According to Sidhu, it could be upwards of three years for a decision from IRCC. Migrante Canada, an advocacy group for foreign workers, says it will fight for the Cayanan family, hoping for a ministerial order to keep them in Edmonton.

"We will continue until we are given the go-ahead to stay in Canada," said Clarizze Truscott, Migrante Canada vice-chair. "There's no question that McKenna has to remain in Canada with her mother."

Despite her precarious conditions, Truscott said Vangie continues to be a community leader and advocate, spearheading a successful campaign that granted health care access for children of foreign workers, volunteering with Migrante Canada's chapter in Alberta, and winning a Human Rights Award from the John Humphrey Centre for Peace and Human Rights.

"No one chooses to be abused or exploited by employers and no one certainly chooses to become undocumented but our immigration system makes them that way," Truscott said.

"(McKenna) has been able to be who she is because of a strong mother," Truscott added. "They go together."

A petition asking the federal government to stop the deportation has garnered more than 2,200 signatures. Last week, Blake Desjarlais, NDP MP for Edmonton Griesbach, wrote a letter to immigration minister Sean Fraser asking for Vangie's deportation to be halted.

"The risk of deportation of her mother has been traumatic and continues to cause immense difficulties for this child," Desjarlais said in the letter. "If Vangie is deported, McKenna will be forcibly relocated to a country that she has never seen, where she will likely not receive quality healthcare, and where she will face serious language barriers. This is unacceptable.

"Vangie and McKenna are integral parts of our Edmonton community," he added. "They deserve permanent status and to remain in Canada."

Canadian citizen, 6 year old McKenna Rose will be deported to the Philippines on July 8th, with her mom Vangie Cayanan. McKenna needs ongoing healthcare that she won't be able to get if she’s deported.

We are calling on Minister Sean Fraser to stop their deportation. #cdnpoli pic.twitter.com/KSXwogU2Ez 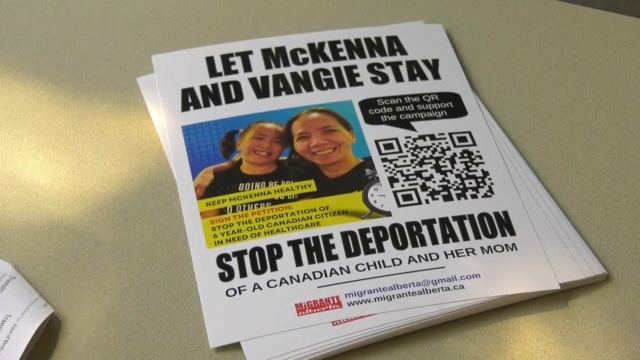 "I want to give back to the community. The community helped me to be strong right now," Vangie said. "That's why I'm here."

"I don't want to beg, I just want to fight for her rights. McKenna deserves everything just like other Canadian children," she added. "I'm asking for all the support to stay here. McKenna belongs here. I belong here. We belong here. This is our home."