This unique camp offers rehabilitation and relaxation for people with aphasia 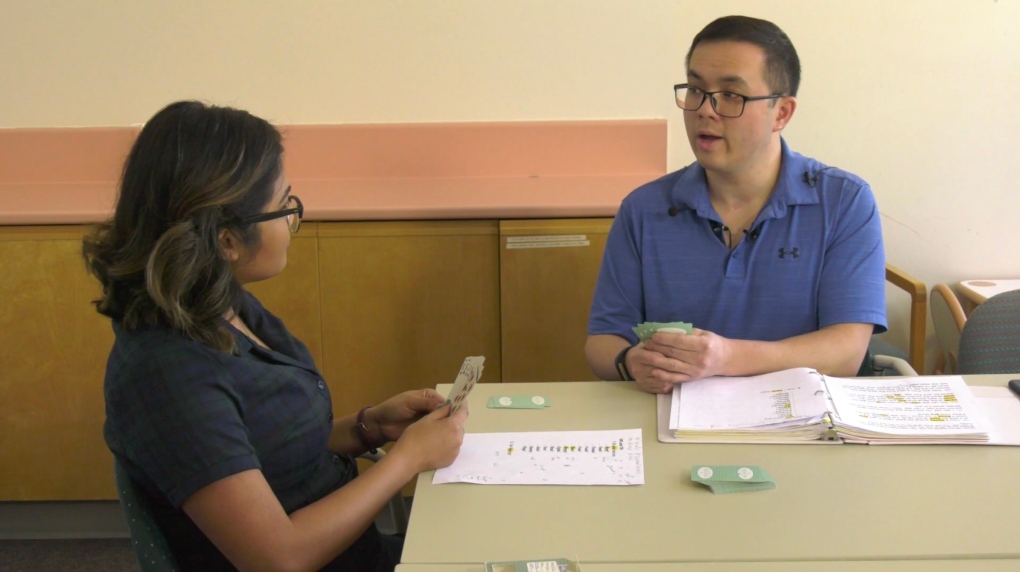 Herman plays a game of Go Fish with a student clinician, one of many exercises he uses to improve his motor speech.

EDMONTON -- An Edmonton man shot in the head after getting caught up in a violent crime spree has now recovered thanks in part to a unique rehabilitation camp.

Herman Koo was shot by a man fleeing police on March 27, 2018. The brain injury caused aphasia, affecting his ability to speak, understand, read and write.

He learned how to speak again with the help of the Corbett Hall Speech-Language Pathology Clinic at the University of Alberta. Now an out-patient, Herman continues to practice and improve his communication.

“I think the people are just really wonderful. And they’re very patient! No matter what they’re doing, they just smile,” his father Simon Koo said in a written release.

Herman and Nicole, an SLP student in the Department of Communication Sciences and Disorders are demonstrating treatment approaches for clients with aphasia. These are treatments typically used in the SLP Corbett Clinic. pic.twitter.com/tKPEqVrFML

Part of Herman's treatment and rehabilitation was a stay at the Alberta Aphasia Camp, put on by the U of A's Faculty of Rehabilitation Medicine and March of Dimes Canada.

The annual camp includes recreational activities like yoga, canoeing, nature walks and art. There is also therapeutic support from staff and volunteers selected from students studying to be speech-language pathologists, occupational therapists and physical therapists in the Faculty of Rehabilitation Medicine.

Connecting with other campers is an important part of the retreat.

“It gives [people living with aphasia] a chance to get together, work together like a team and sing together, do crafts together, help each other. Some of them are still in the hospital. It gives them a chance to see the sun. I think this is one of the best things,” Simon Koo said.

This year's camp is Sept. 18 to 20 at Gull Lake Centre. Application forms will be available beginning in May 2020.