Timeline: Everything you want to know about the pipeline feud between Alberta and B.C. 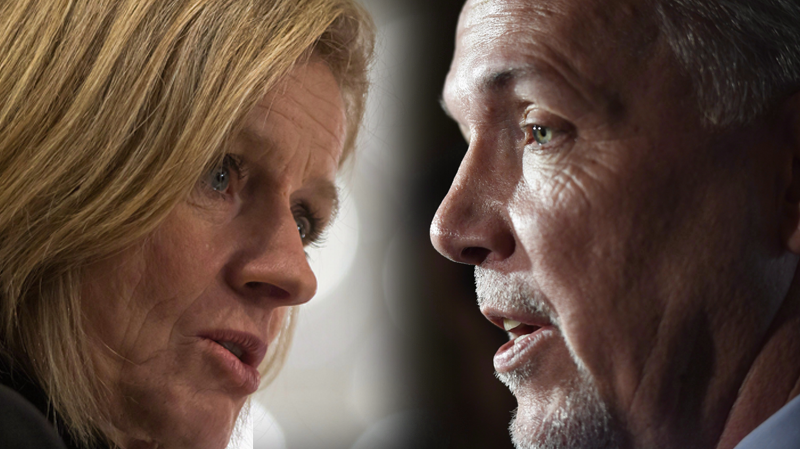 The fight over the Trans Mountain pipeline expansion between Alberta and British Columbia has escalated.

On Monday, April 16, Premier Rachel Notley’s government introduced legislation that could limit how much oil and gas companies export to our neighbour to the west.

Alberta and B.C. are both run by NDP governments, but when it comes to pipelines, the two leaders can’t see eye to eye.

How did we get here?

Here are some key events that brought us to where we are today:

Kinder Morgan gets the green light

Kinder Morgan already has a 1,150-kilometre pipeline that runs from Strathcona County, Alta. to Burnaby, B.C. The proposed $7.4-billion project would increase the pipeline's capacity from 300,000 to 890,000 barrels a day.

But Clark and her minority government lost power. 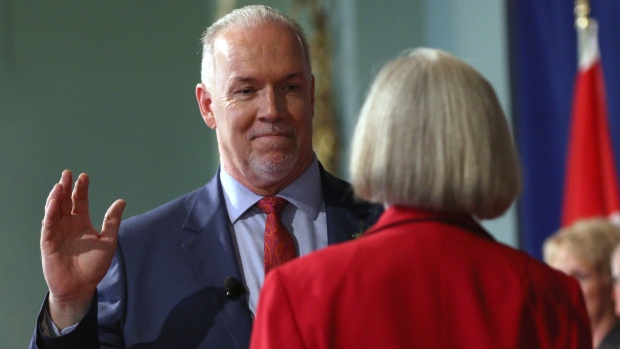 B.C. Premier John Horgan takes an oath with Lieutenant-Governor Judith Guichon as he's sworn-in as Premier during a ceremony with his provincial cabinet at Government House in Victoria, B.C., on Tuesday, July 18, 2017. THE CANADIAN PRESS/Chad Hipolito

On June 29, 2017, the B.C. Liberals were defeated in a non-confidence vote in the legislature, leading to the formation of a minority NDP government.

Part of that deal included using “every tool in the toolbox” to stop the Trans Mountain pipeline expansion.

On January 30, 2018, Premier Horgan proposed limiting increases to the transportation of diluted bitumen into B.C., until it has conducted more spill response studies.

"We believe we have every right to protect our marine environment and our economy," Horgan said.

It was widely seen as a deliberate attempt to block the federally approved Trans Mountain project.

This was not Horgan’s first attempt at fighting the Trans Mountain expansion project, but it was certainly a move that caused the feud between the two provinces to heat up. 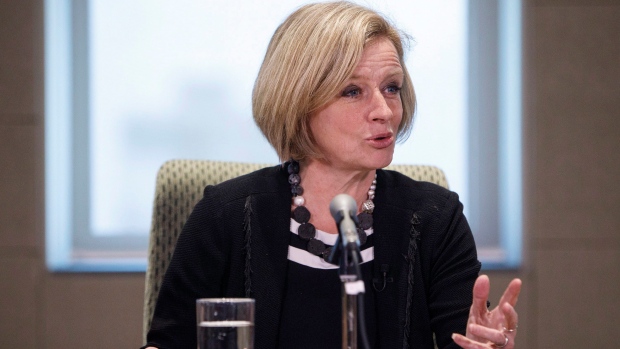 On January 31, 2018, Notley called an emergency cabinet meeting to discuss how her government could respond to Horgan’s proposal.

She announced negotiations to purchase electricity from B.C. would be halted. 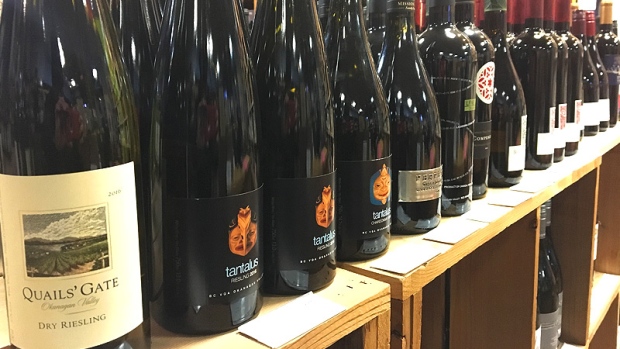 Putting a cork on B.C. wines

On February 6, 2018, Notley took aim at B.C.’s wine industry, announcing the Alberta Gaming and Liquor Control Board would stop importing wines from that province.

“This is one good step to waking B.C. up to the fact that they can’t attack our industry without a response from us,” Notley said at the time.

This came after Horgan announced his government was filing a constitutional reference case on the issue called ‘Point 5.’

On March 23, 2018, the Federal Court of Appeal ruled against two applications made by the B.C. government and the City of Burnaby to appeal the National Energy Board ruling that allowed Kinder Morgan to bypass local bylaws. 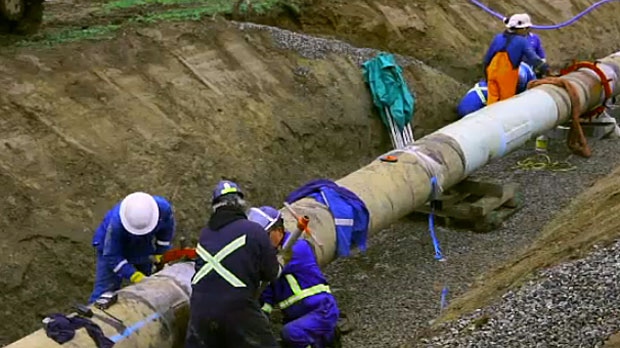 On April 8, 2018, Kinder Morgan announced it was halting investor spending and suspending all non-essential activities on its Trans Mountain expansion project.

In a release, the company said it would not commit further shareholder dollars to the project, until it gets a clear signal that it can build the pipeline, blaming the decision on B.C.'s mounting opposition to the project.

Kinder Morgan said it will consult with various stakeholders to try to reach an agreement by May 31. 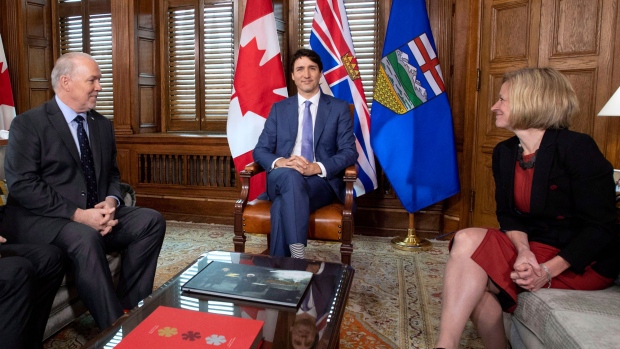 On April 15, 2018, Prime Minister Justin Trudeau called a meeting with the two premiers.

Trudeau announced there will be both financial and legislative measures to ensure the pipeline expansion will move ahead. But he was short on details and did not elaborate.

On April 16, 2018, the day after the high-profile meeting, Notley’s government tabled a new bill that could drive up gas prices in B.C.

Bill 12 would give the energy minister the power to restrict the flow of oil, gasoline and natural gas leaving the province.

"The bill sends a clear message: we will use every tool at our disposal to defend Albertans [and] to defend our resources," Notley said Monday.

The government hinted that it would take such legislative steps prior to the speech from the throne a month before.

'We're going to get the pipeline built': Trudeau

Both provincial leaders have shown little willingness to back down on their diametric pipeline positions.

Trudeau put the blame on the B.C. government for the impasse.

"I don't think we would be in this situation if the British Columbia government hadn't continued to emphasize its opposition to the project," Trudeau said after the Sunday meeting. "That is why we are at this point right now."

Despite the delays, Trudeau promised on multiple occasions “to get the pipeline built.” 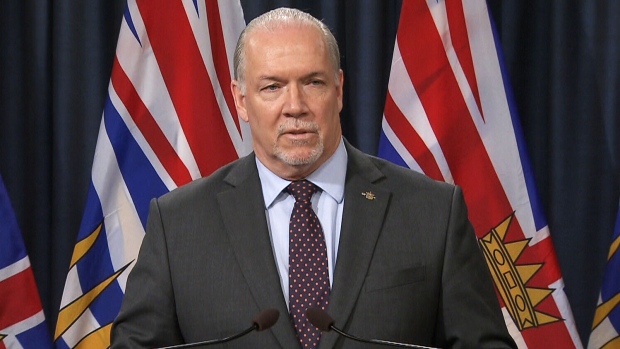 On April 26, 2018, Horgan ramped up its fight against the Transmountain pipeline expansion and took the dispute to the B.C. Court of Appeal.

The B.C. government asked the court whether legislative amendments will allow it to control the flow of heavy oils through the province.

The reference question essentially asks whether it has the power to protect the province from the threat of a diluted bitumen spill.

Notley said she was not surprised by this move and instructed officials to apply to be a party in the reference case.

The federal government announced it would be intervening in the B.C. government's court reference to assert its jurisdiction. 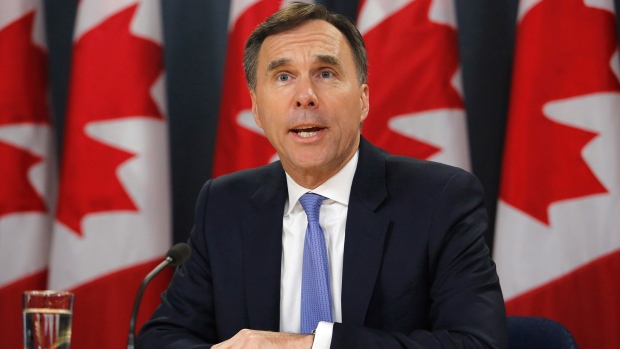 Finance Minister Bill Morneau speaks about the Trans Mountain Expansion project at a press conference in Ottawa on Wednesday, May 16, 2018. (Patrick Doyle / THE CANADIAN PRESS)

On May 16, 2018, Finance Minister Bill Morneau revealed what financial measures the federal government is prepared to take to ensure the pipeline gets built.

Morneau said the federal government is prepared to idemnify the project from any financial loss, adding should Kinder Morgan back out, it is willing to offer this financial security to any other company who wants to build the pipeline.

He would not say how much money the federal government is willing to put in, but said the financial backing must be fair and beneficial to Canadians.

On May 17, 2018, the Alberta government passed Bill 12, legislation that gives it the power to restrict and redirect the flow of oil to B.C.

Notley won't say when and how Bill 12 will be used, but said she won't wait long.

"Albertans, British Columbians and all Canadians should understand that if the path forward for the pipeline through B.C. is not settled soon, I'm ready and prepared to turn off the taps," she said.

B.C.'s Attorney General questioned the legality of the bill and hinted it will be challenged in Alberta courts. 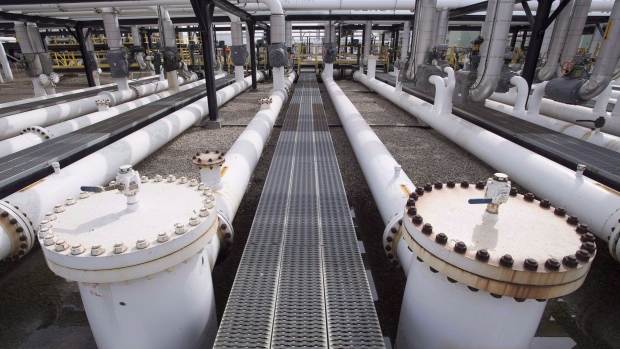 On May 22, 2018, the B.C. government files a lawsuit against the Alberta government, claiming Bill 12 is unconstituional because it is intended to punish it by limiting exports of fuel products.

The statement of claim said the legislation goes against three sections of the Constitution. B.C. also denies that it is responsible for Trans Mountain Pipeline expansion product delays.

On Tuesday, May 29, 2018, federal finance minister Bill Morneau announced the federal government was planning to buy the Trans Mountain pipeline expansion and all of Kinder Morgan Canada’s core assets for $4.5 billion.

News of the purchase plans meant construction would continue through the summer of 2018. The sale was expected to be completed in August 2018.

On July 22, 2018, the federal government failed to find a new buyer for the expansion project by the deadline. Kinder Morgan had been working with the government to identify another buyer before July 22.

Without a deal, it is expected the pipeline company will now take Ottawa’s $4.5-billion offer to purchase the project from its shareholders.

The price tag does not cover the construction costs of building the new pipeline, which previous estimates have pegged at about $7.4 billion.

The sale is expected to be approved in August or September. 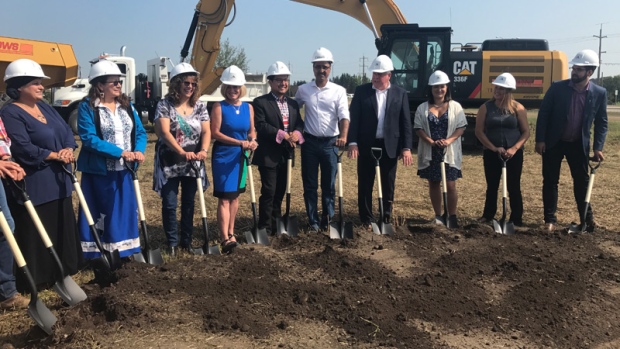 Enoch Cree Nation, just west of Edmonton, will be one of four staging areas in Alberta that will receive and store materials needed to build 980 km of new pipeline.

“We are proud of the relationship we have built with Trans Mountain and to partner with them on this project,” Chief Morin said. “This worksite will allow us to create opportunities for our people and community for many years to come.”

The Enoch stockpile site is expected to spur investment in the region and kick-off the Enoch Cree Nation’s industrial subdivision.

On August 20, 2018, the Federal Court of Appeal reversed Ottawa’s approval of Trans Mountain, putting the pipeline expansion in jeopardy.

The court said the government failed its duty to engage in “meaningful two-way dialogue” with First Nations.

Indigenous communities, including the Squash Nation and Coldwater Indian Band, called the court ruling a recognition of Indigenous rights.

"This is a major victory for my community," said Coldwater Chief Lee Spahan. "Thankfully, the court has stepped in where Canada has failed to protect and respect our rights and our water."

The judges unanimously decided the National Energy Board’s review of the project was so flawed the federal government could not rely on it as a basis for its decision to approve the project.

The court found the NEB’s review did not consider the impact on marine shipping and assess the potential impact of increased tanker traffic on the southern resident killer whale population.

The decision may still be appealed to the Supreme Court of Canada.

The federal government launched a review of oil tanker traffic off of the coast of British Columbia weeks after the Court of Appeal overturned approval of the pipeline expansion on September 21, 2018.

The NEB was given a six-month timeframe to redo its review of the Trans Mountain pipeline expansion, including a full assessment impact on the number of oil tankers in the Burrard Inlet that the pipeline expansion will bring.

The board has been ordered to provide the finding to cabinet by the end of February 2019 on whether the pipeline expansion should be approved again and what conditions must be met.

Natural Resources Minister Amarjeet Sohi had said the court’s previous decision was “disappointing, but by no means insurmountable” and said the timeline was chosen because the Liberals believed it was enough time to carry out the assessment.