U of A experts confirm presence of ‘formidable’ parasite in Alberta 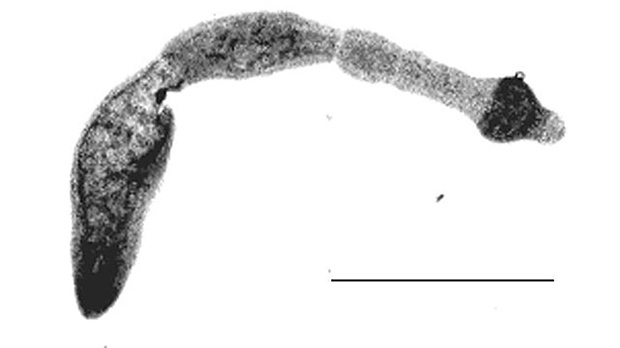 Experts at the University of Alberta have confirmed the presence of a parasite that was recently introduced to coyotes in the province, has also been found in humans.

Officials called the parasitic disease “formidable”, and officials said there had been four patients in Alberta confirmed to have Echinococcus multilocularis in the last four years. Before that, the only previous case in Canada was reported in Manitoba in 1928, with one in the United States, in Minnesota in 1976.

The U of A said biologists at the University of Calgary identified high infection rates in Alberta coyotes a few years ago, and confirmed the parasite is from Europe.

“My very skilled colleagues in the vet school in Calgary, they were actually on top of this before we ever had a human case, they identified that the parasite was getting established in the local wildlife, and they were able to develop a sophisticated molecular test that showed it was actually the European strain of the parasite, not the North American strain that’s always been here and never caused trouble,” Dr. Stan Houston, a Professor of Medicine and Public Health at the U of A, said.

The disease is considered to be rare, but people with low immunity are at greater risk of contracting the disease.

In canines such as coyotes and foxes, the parasite starts as a relatively harmless tapeworm, officials said, but the parasite changes form depending on the host.

Rodents, officials said, who consume canine feces, get lumps on the liver – if a coyote or a dog were to catch and eat that rodent, the parasite returns to tapeworm form, and the canine displays no symptoms.

Humans can be exposed in two ways: by eating foods grown close to the ground (such as carrots from the garden, that are exposed to canine feces), or when exposed to microscopic traces of dog feces in pet hair, if the dog hunts rodents – if that dog is petted and then the person touches their mouth or food, the parasite’s eggs are ingested.

In humans, the parasite manifests as lumps on the liver – and officials said humans exposed to the parasite would require treatment right away.

The parasite also grows slowly, and in most cases, does not present symptoms early on – but if it goes untreated, it can spread to other parts of the body, similar to cancer.

“It actually kind of behaves like a cancer and once it gets started it spreads locally and metastasizes like cancer does to other parts of the body,” Dr. Houston said. “If you find it when it’s localized and a surgeon is able to remove the whole thing, that’s curative. In fact, we still give a course of anti-parasitic drugs for over a year.”

“If it’s just spread too far in the liver for example, or spread elsewhere, then you actually have to be on an anti-parasitic drug for the rest of your life.”

Officials said about one third of patients diagnosed with the parasite are jaundiced (they turn yellow), a third report pain and see a doctor for that, and the final third visit a doctor for another reason and a liver mass is identified through an ultrasound or CT scan.

Officials said in about two thirds of cases, by the time it is found, the cases are inoperable.

The parasite, if left untreated, will kill its human host in 10 to 15 years.

People who are most at risk are those who have a dog, hunt, and could be exposed to potentially infested animals.

To prevent exposure, Houston said to have a dog that is suspected of consuming rodents, to have that pet dewormed regularly – but ensure the medication covers this tapeworm.

“If your dog’s lifestyle might involve eating rodents, then you should deworm your dog on a normal basis,” Dr. Houston said. “In fact, one key thing is that deworming for tapeworms is different than the standard deworming for roundworms that I understand to be the norm. So you’d have to discuss this with your vet.

“Washing your hands after petting your dogs is always a good idea…and being meticulous about cleaning fruit or vegetables.”