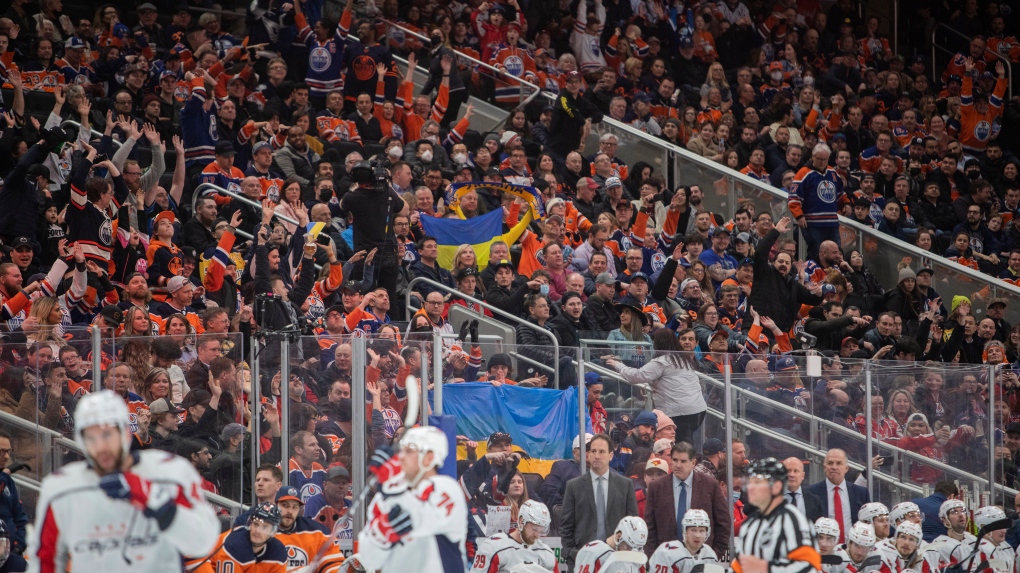 Leaders of the Ukrainian community in Edmonton are calling on police to treat a "violent attack" on members after an Oilers game last week as a hate crime.

According to the Ukrainian Canadian Congress Alberta Provincial Council (UCC-APC), fans displaying Ukrainian flags were assaulted by men outside Rogers Place on March 9.

"A group of men, who spoke and yelled in Russian," the UCC-APC says, "began to assault them (Ukrainian community members), throwing punches, kicks, and grabbing by the neck."

Cheryl Voordenhout, Edmonton Police Service spokesperson, confirmed officers responded to the altercation after the Edmonton Oilers game outside the arena.

"Police who were working extra duty for the hockey game were on scene and restored order," Voordenhout said in a statement to CTV News Edmonton.

No one was arrested at the time, Voordenhout added. She said one person was briefly detained by police but released without charges. The incident remains under investigation.

On Monday, in an update to CTV News, Voordenhout said the hate crimes unit had been "consulted," however, they are not "the lead in the investigation."

The attack on Ukrainian community members outside @RogersPlace last week was completely unacceptable. I spoke with President Boychuk to offer my support and I urge all Edmontonians to remain united and avoid division in solidarity with Ukraine and Edmonton’s Ukrainian community.

The Oilers played against the Washington Capitals Wednesday evening, with Russian star Alex Ovechkin booed whenever he touched the puck.

The match was part of the Oilers' stand with Ukraine week, which included performances of the Ukrainian national anthem and a 50/50 supporting relief efforts in the war-torn country.

Alexandra Chyczij, UCC national president, said in a statement that there has been an increasing amount of violence, vandalism, and attacks on members of the Ukrainian-Canadian community since the onset of the Russian invasion of Ukraine.

"Given that this group of Ukrainians were clearly identified as such by the flags and other symbols they wore, we insist that Edmonton police investigate this assault as a hate crime," Chyczij said.

The UCC encourages anyone who is a victim of an attack or vandalism to report it to them and their local police service.