EDMONTON -- First, it was Doan’s Vietnamese Restaurant, a staple in Old Strathcona for 32 years.

Then, the landmark Army and Navy location on Whyte Ave.

Both have announced they will not be reopening when Alberta’s so-called “relaunch” starts – potentially, later this week.

Both businesses were family owned; both were shut down by the COVID-19 pandemic; both blame that shutdown for forcing them to close their doors permanently.

Jacqui Cohen, the Vancouver-based owner of the Army and Navy chain, released a statement. Part of it reads “we had hoped to re-open but the economic challenges of COVID-19 has proven insurmountable.”

The owners of Doan’s posted the news on their facebook page.

“…Covid19 made a huge impact on our economy and unfortunately, it hit our family very hard,” reads part of the post.

The Old Strathcona Business Association expects those business are not alone.

“So I think, sadly, we are probably going to see more,” Executive Director Cherie Klassen told CTV News Edmonton. “And that's just the reality of what everyone is dealing with.” 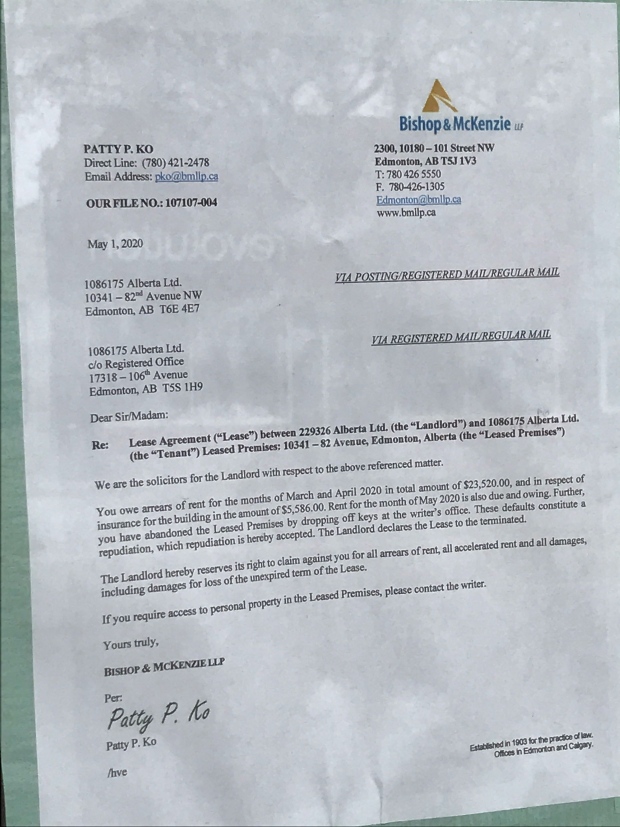 A letter dated May 1 was also left on the front door of The Funky Buddha, a longtime Whyte Ave. Pub. It alleges the bar didn’t pay its rent for the months of March, April or May, and declares the lease terminated.

The bar confirmed on social media on Monday night that it would not be reopening.

But the area’s business association says there is also some room for optimism. Several businesses are getting ready to re-open when the government allows. For restaurants, that’s expected to be Thursday.

Klassen is confident the spaces left vacant will be filled, and that Whyte Ave., the jewel in the crown of Old Strathcona, will shine again, in a post-COVID-19 world.

“While it’s sad that some businesses may close, maybe it’ll create an opportunity for something new to come in.”