'We're so filled up right now with pride for him': Arena officially renamed after Iginla 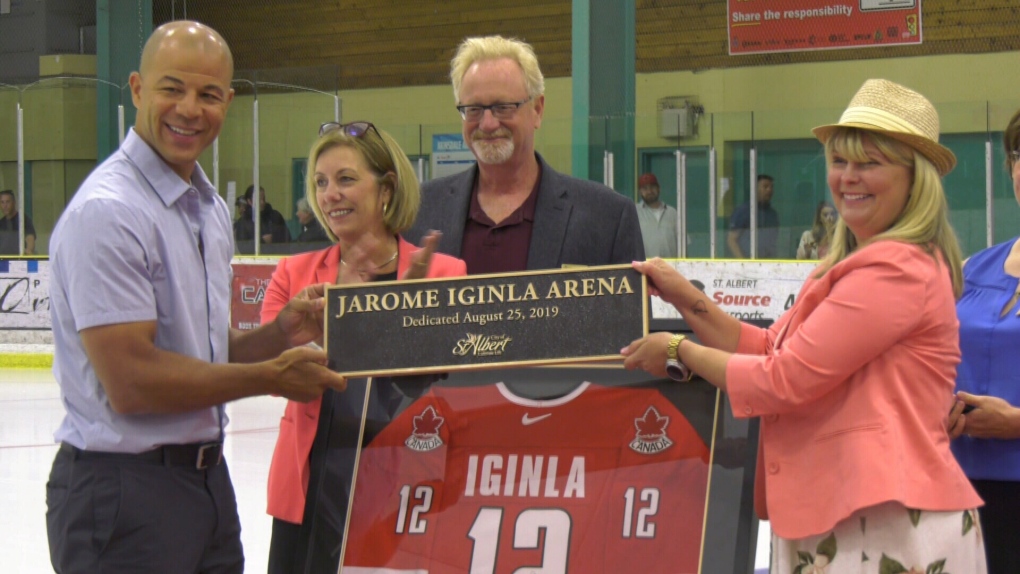 An arena in St. Albert has been renamed after an NHL player who grew up on its ice.

Jarome Iginla, who spent 16 seasons with the Calgary Flames, was at the ceremony on Sunday during which the City of St. Albert made the honour official.

"When you go into junior (hockey) and you meet kids, it's the first time people are coming from a different area (and) I was always proud to be from St. Albert," Iginla said.

Iginla played his Midget AAA season with the St. Albert Raiders, before entering the Western Hockey League on the Kamloops Blazers team.

In 1995, he was drafted 11th overall by the NHL's Dallas Stars, and then was traded to the Flames.

Throughout his career, Iginla would earn Olympic, World Junior and World Cup Golds.

Through it all, he said hometown support never wavered.

“I want to thank you guys for your support, your encouragement, and you continued to cheer me on, even though I played for the Flames and I know a lot of you guys didn’t like them,” Iginla told the crowd, which responded in whoops and cheers.

“I love seeing all the Flames jerseys here though. Thank you.”

St. Albert Mayor Cathy Heron told CTV News Edmonton the spirit has lasted long past Iginla's retirement in 2018: "We're so filled up right now with pride for him."

The Akinsdale Arena, as it was originally named, opened in 1978.

"When they opened this arena it was a big deal—I remember it very well," Heron said.

"So the fact that Jerome started to skate in this very arena proves that the investment that we do as municipalities—we invest in recreational facilities—and it's an important investment.

"Because not only does it bring success to Jarome and him individually, it brings a community together. There was a stand full of people here celebrating him today."

Along with the naming ceremony, St. Albert hosted a free barbecue, street hockey game, and a public skate.