EDMONTON -- Speculation surfaced Wednesday morning that the Edmonton Riverboat was about to sink.

The tour boat was seen leaning to its right, or starboard, side.

A firefighter on scene told CTV News Edmonton it doesn't appear Edmonton Riverboat is taking on water – but that officials can't get on it to assess damage.

Its owner confirmed melting ice on the North Saskatchewan River was making it hard to access the boat and see its condition.

“Last night around three, the water level went up to the deck we're standing on and boat went up again,” explained Jay Esterer.

“When it went down, it came onto the post. If the water goes down, it'll put holes in the boat. And if it goes up, it'll be free.” 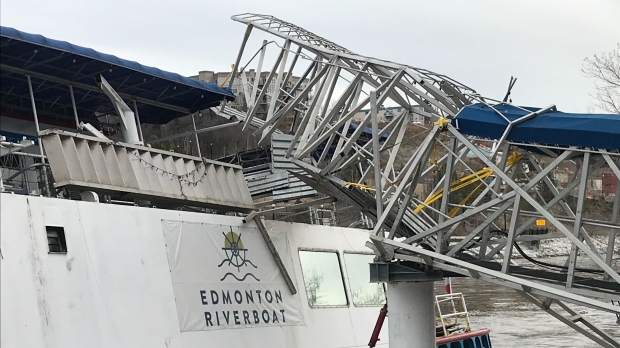 The firefighter said a dam upstream was allowed to let through a higher water flow in hopes of cleaning out some of the ice, but resulted in it jamming up between the Riverboat and shore.

“The wrap to load people on has been pretty much destroyed there, because the ice kept pushing and twisted,” explained Fire Station No. 2 Capt. Wade Lamb. “And now the ice has gone underneath this side and it’s tilted the boat a little bit on that side there.”

A worker who tried to walk on the ice to get onboard got stuck momentarily, freeing himself within a few minutes of digging.

“(He) had crawled out on this ice to try to get a look at the hull of the boat to see if there’s any damage, but his foot went through the ice. He ended up getting himself out, but probably shouldn’t have been out on the ice.”

The boat appears to be listing only because it has been twisted by the ice jam, Lamb said. 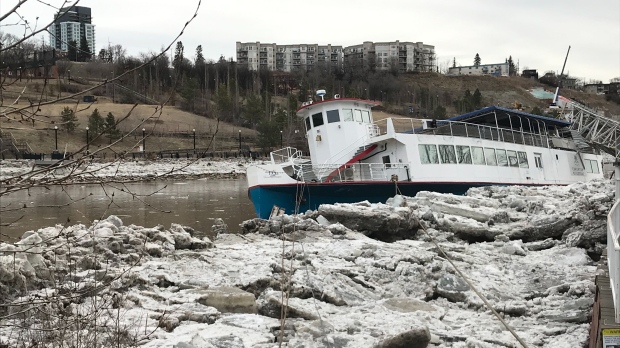 Donal O’Beirne and his daughter Abigail were biking when they stopped to take a look at the beached ship.

“The poor boat, right? Every year, something’s wrong,” he commented.

The tour boat was damaged by an ice jam in December. In July, 300 passengers were stuck onboard overnight when currents were too strong for the boat to be docked.