A man who saw two women get hit by a U-Haul truck in downtown Edmonton says the driver could have avoided them.

Sharif Hasan Abdulahi is accused of hitting Const. Mike Chernyk with a car and stabbing him multiple times before driving a U-Haul truck through downtown Edmonton and striking and injuring four people on Sept. 30, 2017.

In Day 9 of the trial where the crown is trying to prove Sharif intended to kill people, witness Gaspar Dias, who was parked at a red light on Jasper Avenue and 107 Street, testified seeing the U-Haul hit two pedestrians.

Dias told court he could see two women standing on the northwest street corner and spotted the U-Haul southbound on 107 Street. 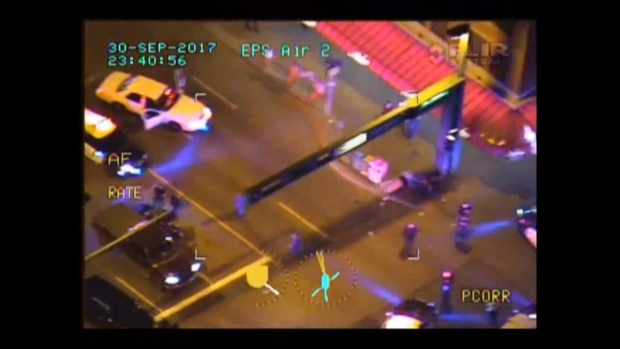 Gaspar Dias, the driver of the black pickup truck at the intersection of Jasper Avenue and 107 Street, saw the U-Haul truck hitting two women.

"I remember telling the person next to me, 'This guy is never going to stop on time,'" Dias said, adding there was a vehicle travelling in the same direction in front of the U-Haul.

"Even though there was a vehicle there, there was so much space to go through the lights. But he went over the sidewalk and hit those two girls."

"It took me a long time to ask for help when I became suicidal," said Kimberley O’Hara, who suffered a broken leg, broke hip and fractured pelvis, and had no recollection of being on Jasper Avenue that night.

"I am angry. I have PTSD," Stewardson said. "I’m an angry person. Short. I’ve ruined relationships because of it."

Dias told court O'Hara "was dragged about 20 feet" and hit his back tire.

"There were people screaming, people crying," Beutler said. She performed first aid on Stewardson and went to the hospital with her.

"She kept asking about her friend [O'Hara], who I knew was severely injured, but I just kept saying she was going to be OK," Beutler said.

Stewardson was released from hospital later that night.

Sharif, who is representing himself in court, has pleaded not guilty to all 11 charges and has not cross-examined any crown witness.