'You are strong enough': Muslim women offered self defence classes in wake of attacks 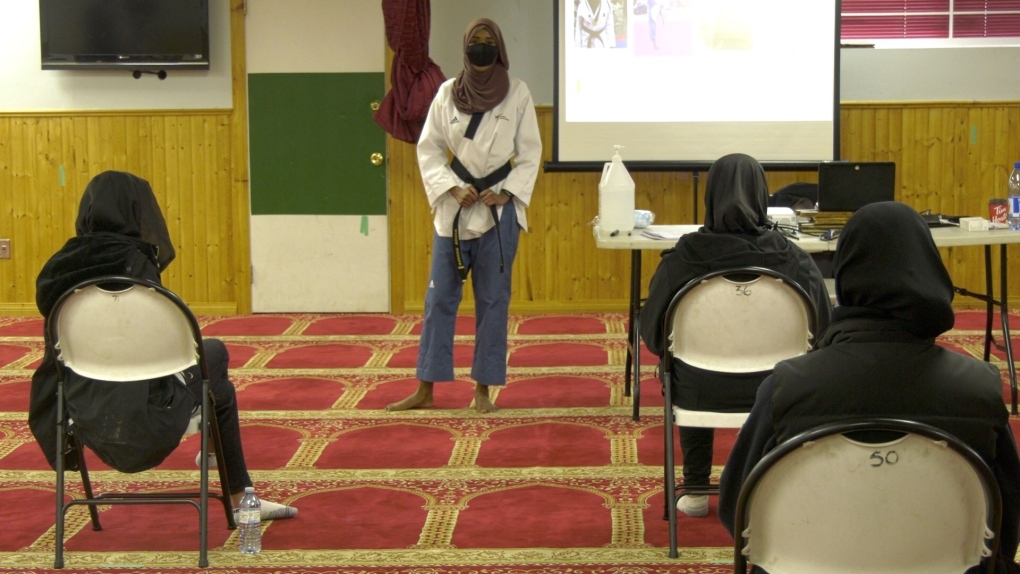 Self defence classes at Edmonton mosque.

EDMONTON -- There’s a sense of fear in Edmonton’s Muslim community after several attacks on Black Muslim women in recent weeks.

“It’s been a trend where we’ve seen five in a span of weeks so the community came together and felt that action needed to be taken,” said Noor Al-Henedy, the communications and public relations director for Al Rashid Mosque.

“It is really in a way taking a stand and saying we will not tolerate the abuse that our women are going through,” she said. “It’s not right.”

She said they were given permission from Alberta Health but must keep class sizes to a maximum of 25 people and follow other public health guidelines.

Al-Henedy believed the need for such a class was urgent and participants were grateful to learn ways to keep themselves safe.

“I think it’s really important that we all get to know the basics so we’re not in a situation where we’re too afraid or we panic,” said one participant who asked not to be identified.

The goal is to replace the fear the women feel with confidence.

“Believing and understanding that you can and you are strong enough,” said Aisha, a World Taekwondo Federation 3rd Dan Black Belt and class instructor.

“Any woman, regardless of whether she’s a Muslim or not need to be very vigilant and very aware especially if she’s walking alone,” said Al-Henedy.

“There could be a form of harassment or attack against her unfortunately it’s just something women around the world have to go through.”

Al-Henedy said Edmonton is home to Canada’s oldest mosque which was built in 1938 and doesn’t understand why Muslim women are being targeted now.

“We kind of built our city together so to see right now that Muslim sisters are being targeted for hate attacks 80 years after the first mosque was built it raises a lot of questions of where is this coming from? How did we get here? And how can we undo it,” said Al-Henedy.