1 in custody, 2 at large after armed robbery at Southgate Centre

EDMONTON -- One person has been arrested and two more are still at large after an armed robbery at a jewelry store at Southgate Centre.

Edmonton police responded to the mall at 110 Street and 51 Avenue shortly before 12:30 p.m. for a call about the robbery.

Investigators confirm that one of the robbers deployed a noxious spray during the robbery. One person was taken into custody by police, but investigators believe two other robbers at large. They do not have descriptions of the thieves.

Witness Gord Deeks told CTV News he was in the Apple Store when he saw three masked men at the nearby store.

"They had guns but they were using the butt ends to break the glass," he said. "The noise was so loud because when they hit that glass, it sounded like they were shooting."

Customers in the Apple Store were quickly ushered into a supply room where they remained until police told them to exit through a back entrance.

"There were a couple people shaking a bit," said Deeks. "We kind of didn't know what was happening at first."

Deeks said people were rubbing their eyes as they left the mall, and some patrons told him pepper or bear spray was used in the incident.

Other reports on Twitter indicated people started running when it happened.

Ambulances were also on scene outside the mall.

In a statement, Southgate Centre called the safety of its guests, tenants and employees its first priority.

"Our security staff acted rapidly and kept the situation under control until the authorities and the emergency services arrived onsite."

In added it was working with authorities in the ongoing investigation, and that the north wing of the centre would remain closed for investigation until further notice. The rest of the mall was said to be operational. 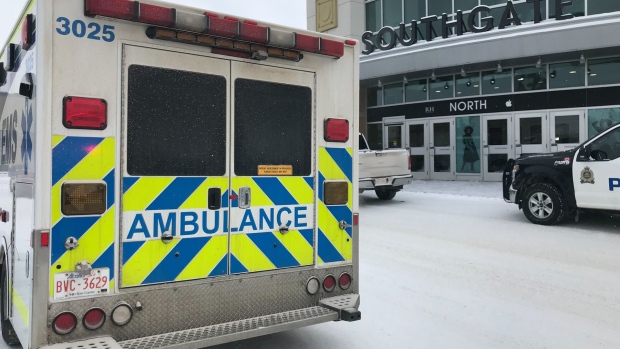