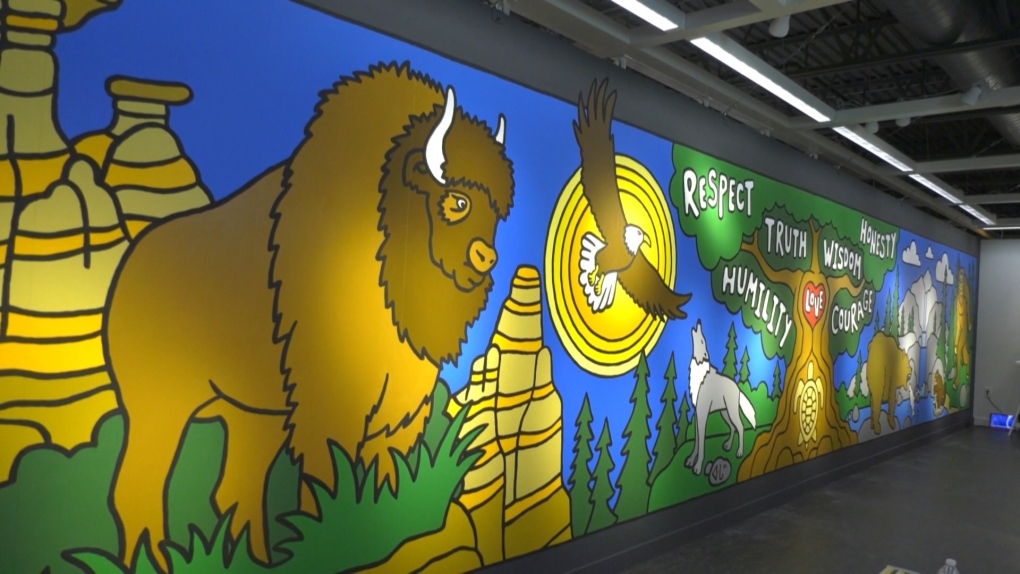 EDMONTON -- A piece of art shedding light on Indigenous culture will be showcased to about two million visitors every year, and it's not in an art gallery, but Edmonton's IKEA.

The 40-foot mural is a visual and verbal representation of sacred hereditary teachings, and is a collaboration months in the making between IKEA and Indigenous Treaty 8 artist Lance Cardinal.

"I think this is a tremendous opportunity right now to present these seven sacred grandfather teachings to all of Alberta, because right now we need something that binds us together," said Cardinal.

The mural is a way to enlighten and educate about the ancient Indigenous philosophy of seven words and symbols connected to one another.

"The biggest message I want people to get from this mural is that of understanding and learning about the Indigenous culture," said Cardinal.

The unveiling of the mural was celebrated through song and dance, with words from a Treaty 6 Grand Chief.

"He's on his way to being an Alex Janvier and a champion of Indigenous art in Edmonton and Alberta," said Grand Chief Billy Morin. "He's the real deal."

With millions having witnessed the work of Janvier in Ford Hall connected to Rogers Place – one recent major Indigenous commission – Edmonton's mayor is hoping more are to follow.

"I think it's wonderful corporate leadership from IKEA, to not just put something beautiful in the store, but education and knowledge as well to share with customers," said Mayor Don Iveson.

"We have a couple thousands of people coming through the store every day, so it's going to be millions of people actually," said Helene Loberg, IKEA manager.

Cardinal says he's excited to work on more projects like this in the future.

"Bring some more art and some exposure to our nation and really really try to bring up the Indigenous footprint here in Edmonton," said Cardinal.

Cardinal started the mural on June 19, and painted the entire Indigenous scene by hand.