Beck Antiques and Jewellery's new location in Sherwood Park Mall was robbed Saturday morning, with thieves making off with several items, including coins and antique bills.

RCMP say officers were dispatched around 6:40 a.m. to the mall entrance nearest the Cineplex for the break-in.

Two robbers smashed the mall door, rushed into the mall and broke into the store to steal the items out of glass display cases, Beck Antiques said in an email newsletter to its patrons.

"A couple of grinches hit us and it is unfortunate that people are getting so desperate that they resort to crime," said Clinton Beck, Beck Antiques founder, in that email.

"We try and build the most beautiful stores and have the most amazing shopping experience for customers and then some hoodlums have to wreck it," Beck added. "We had a beautiful window display meant to bring joy shoppers, it is unfortunate that we have depraved individuals that have to ruin it."

Mounties said both thieves were males, one had a hammer and the other had a form of metal bar. One wore a black jacket with their hood up and another had a grey sweater and a mask covering their face. 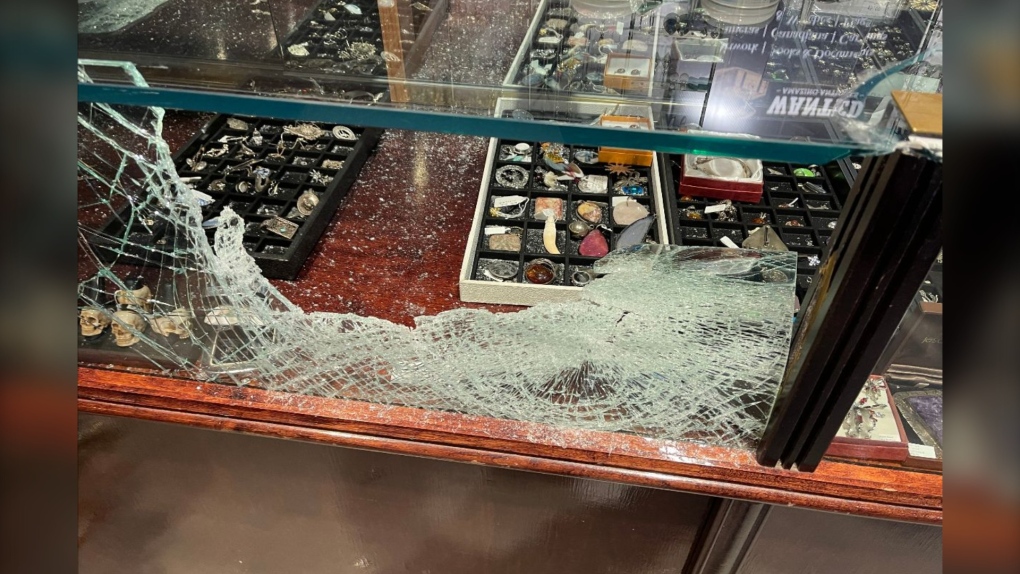 Damage after an early morning robber at Beck Antiques and Jewellery on Saturday, Nov. 26, 2022 (Supplied).

"The investigation continues into this break and enter," said Cst. Drew Burchett, with Sherwood Park RCMP, in a statement.

"It appears that the damages caused during this event may be more costly than the articles taken."

In an interview Sunday, Beck told CTV News Edmonton it is estimated the thieves grabbed about $10,000 to $15,000 worth of sliver, antique bills and currency. He said mall security responded quickly and missed catching the robbers by 30 seconds.

"It was that close," he added. "The robbers were in and out in a couple of minutes."

Beck Antiques moved to Sherwood Park Mall in June hoping that having a mall storefront would be a "safer choice" than a standalone street store. In 35 years of business and running five locations, Beck says break-ins are an unfortunate part of the business.

"You almost get immune to it," he said. "It's more hard on the staff and on people that aren't used to it as much as I am. It's difficult to watch."

"Even though we are in a mall, we are going to be increasing our security."

The store is offering a $500 reward for information leading to solving the robbery.

An annual survey on how trusting Canadians are suggests their faith in governments is rebounding as the COVID-19 pandemic begins to fade.

North Korean leader Kim Jong Un and his young daughter took center stage at a huge military parade, fueling speculation that she's being primed as a future leader of the isolated country as her father showed off his latest, largest nuclear missiles.

Health-care workers have new hand-washing guidelines. Here's how you can apply them

The way respiratory viruses have circulated this fall and winter, most Canadians could probably benefit from a hand-hygiene refresher. Here are the latest hand-washing best practices to apply in your daily life.

The Bank of Canada released a summary of its Governing Council meetings on Wednesday, providing the public and financial institutions with more insight into the central bank’s decision to raise its key interest rate on Jan. 25.

In a first for the Bank of Canada, it has released a summary of deliberations by its governing council regarding its policy decision to raise its key interest rate target by a quarter of a percentage point to 4.5 per cent in January. Here are five key takeaways from those discussions.