‘A heck of a player’: Canadian Heisman nominees back Sherwood Park star Hubbard 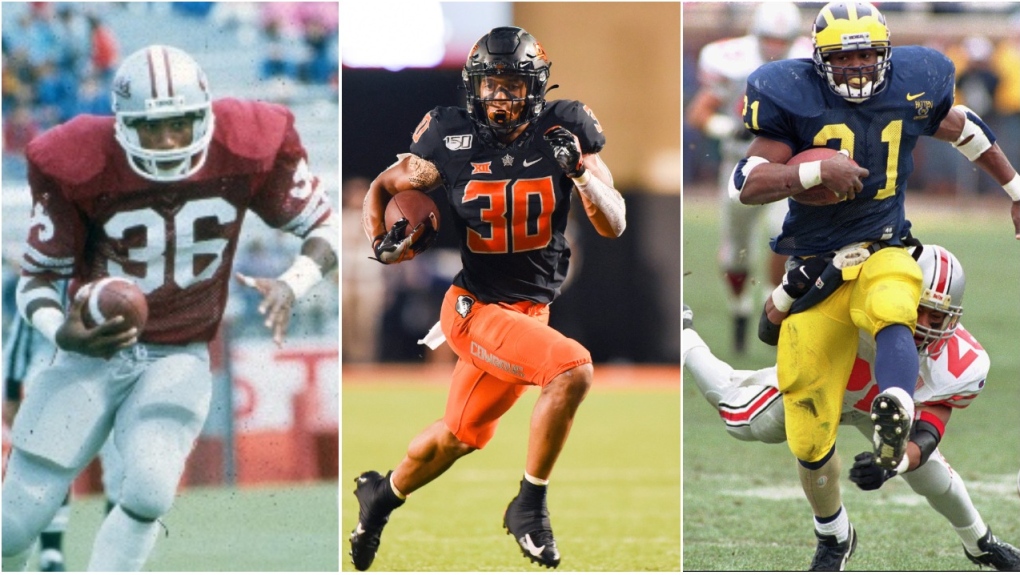 Chuba Hubbard (centre) could join Rueben Mayes (left) and Tim Biakabutuka (right) as well as Tony Mandarich (unpictured) as the only Canadians to be nominated for the Heisman Trophy.

EDMONTON -- An Albertan leading U.S. college football in rushing is rare enough, but if Sherwood Park’s Chuba Hubbard keeps up his torrid pace he could soon join another exclusive club.

Hubbard, 20, has racked up 1,265 yards in seven games this season for the Oklahoma State Cowboys, nearly 300 more than the next closest rusher.

Those numbers have made him a dark horse candidate for the Heisman Trophy, awarded to college football’s most outstanding player.

“That’s all cool and I’m blessed to be recognized for that,” Hubbard said.

‘A FARM BOY FROM SASKATCHEWAN’

Only three Canadians have ever been nominated for the Heisman, with Rueben Mayes being the first to do it during the 1984 season with the Washington State Cougars.

“Just to be mentioned and be in that category in terms of the top college athletes in the country is quite an honor,” Mayes said.

Like Hubbard, Mayes was also a track star from a smaller town not typically considered a haven for talent by college recruiters.

“I’m really just a farm boy from Saskatchewan,” he said.

The North Battleford native also has an Edmonton link.

He says he wouldn’t have risen to college, and later pro, football stardom without some help from former Eskimos general manager Hugh Campbell, who saw his college tape and encouraged Washington State to sign him up.

“(Campbell) called [the coach] and said ‘as a favour, I think you should give this guy a scholarship because he’s had a lot of success in Canada.’”

Mayes ran for a collegiate record 357 yards in one game, finished second in the country in rushing, and received one first-place vote for the Heisman, finishing tenth behind eventual winner and future CFL star Doug Flutie.

“It’s like a dream sometimes. I reflect back now and think ‘wow that was crazy,’” Mayes said of his breakout season.

“Coming from North Battleford and having that opportunity … you pinch yourself and say ‘what that heck man?’"

After a six-year NFL career, Mayes returned to Washington state to live and now runs a hospital foundation, raising money for patients, programs and equipment.

Of Hubbard, Hayes says, “he’s definitely has the opportunity to do some special things.”

“Stay healthy and do the thing you’ve done to get you where you are today.”

‘A HECK OF A PLAYER’

Offensive lineman Tony Mandarich of Ontario finished sixth in the 1988 Heisman voting for Michigan State. But, Tim Biakabutuka was the last Canadian-raised player to land on a Heisman ballot.

In 1995, the Zaire-born, Montreal-raised running back rushed for more than 1,700 yards and 12 touchdowns for the Michigan Wolverines.

He finished eighth in the Heisman voting, behind future NFL star Peyton Manning and winner Eddie George, before a six-year NFL career.

“I didn’t pay much attention to it,” he said of the Heisman hype.

“You’re competing for wins. You’re not thinking about stats.”

“My dream was to become a businessman like most of the ball players I played with in the NFL.”

speaking of unfair, here's second-string running back tim biakabutuka. yes, that was a helmet. pic.twitter.com/JW6GXgHRWl

He’s still a fan of college football and was impressed when he watched Hubbard for the first time last week.

“He’s a heck of a player,” said Biakabutuka. “A fellow Canadian … that’s awesome.”

Biakabutuka’s Michigan team won only nine of 13 games, something he says limited his Heisman chances.

“If we had won more games I would’ve probably ended up a little higher,” he said.

That too will be Hubbard’s struggle as his team enters a Saturday matchup at Iowa State having won four of seven games.

“When you step on the field the number one rule is not to get the most yards, but it’s to finish with the ‘W.’ If he does that, he has a heck of a chance.”

Hubbard’s true Heisman run might come next season, but for now he looks on course to join the only three Canadians to be considered for the 83-year-old award. 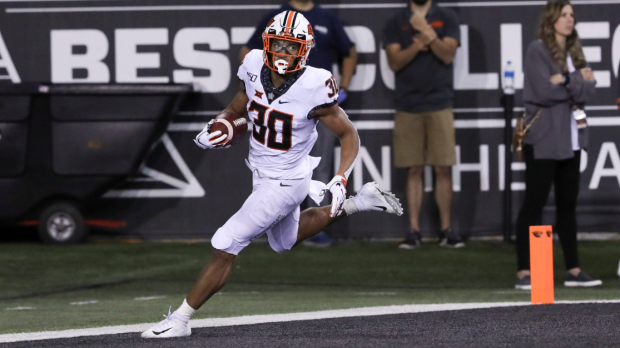