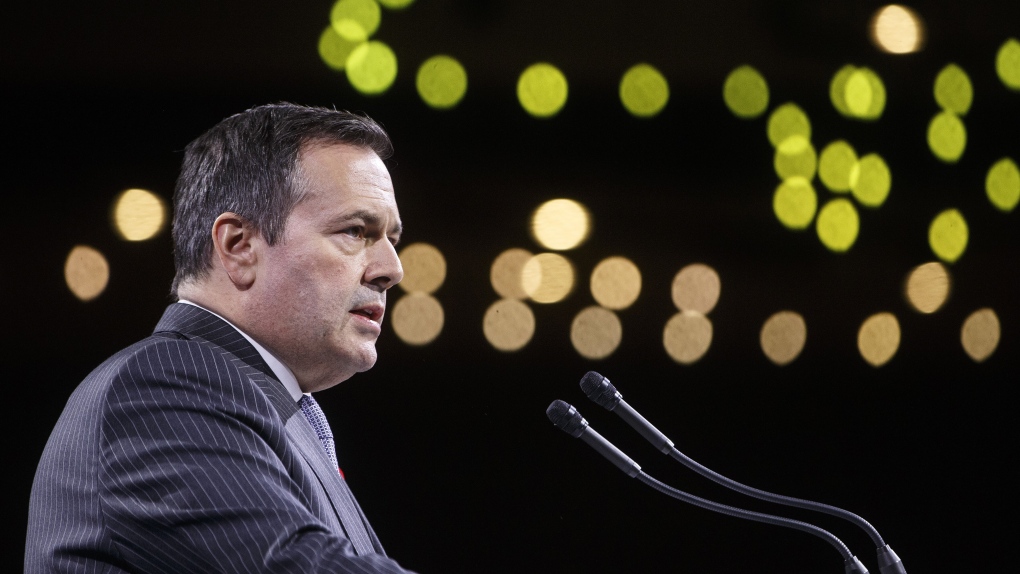 Alberta Premier Jason Kenney delivers his State of the Province address to the Edmonton Chamber of Commerce in Edmonton on October 29, 2019. (The Canadian Press/Jason Franson)

KANANASKIS, Alta. - Premier Jason Kenney is defending his idea that Alberta could pull out of the federal pension plan by saying times have changed.

“And some of the provinces who have benefited enormously from the wealth generated in Alberta are now saying they are going to do everything they can to stand in the way of us exporting our energy.

“This is a new moment in our history.”

Kenney said Ottawa and some provinces are unfairly restricting Alberta's oil and gas industry with regressive laws and policy roadblocks on pipelines.

The British Columbia government has resisted the Trans Mountain pipeline expansion to its coast and Quebec has said it would resist a new pipeline through its jurisdiction.

Kenney said federal policies overhauling energy megaproject approvals, along with a tanker ban off the northern B.C. coast, will further bottleneck the oil and gas industry.

On the weekend, Kenney announced a panel to examine whether Alberta should move toward a more independent role within Canada.

The panel is to report back by the end of March.

Kenney stressed Tuesday that any major policy change that might flow from the panel, such as a new pension plan, would require ratification “by the majority of Albertans in a full and free democratic referendum vote.”

He compared the idea to Quebec gaining specific rights to better chart its own course within Canada and said, as premier, he must balance competing responsibilities.

“The best way we can achieve both is by Ottawa giving Alberta at least as much respect as the province of Quebec gets.”

“None of this was in what Mr. Kenney campaigned on. He said he was going to focus on jobs, the economy and pipelines. And he spent the weekend talking about anything but.”

Kenney also commented Tuesday on reports that some Albertans were blocked online and had their comments deleted after they disagreed with him as his Saturday speech was livestreamed on Facebook.

Kenney said government officials were not directed to do that, but he added it might have been a staffer who misunderstood protocols.

“Perhaps somebody was too eager monitoring that page on that day,” said Kenney.

“I've made it clear to our staff that our social media platform should be wide open for public commentary as long as the language is not abusive or extreme.”

Hoffman said she was skeptical it was a rogue staffer and suggested that an online shutdown is symptomatic of a top-down political culture.

“The reason why the staffer did it was because they felt they had a mandate to shut down dissenting voices, just like Mr. Kenney does every single day,” said Hoffman.

“He finds ways to attack individuals (and) to attack our institutions.”