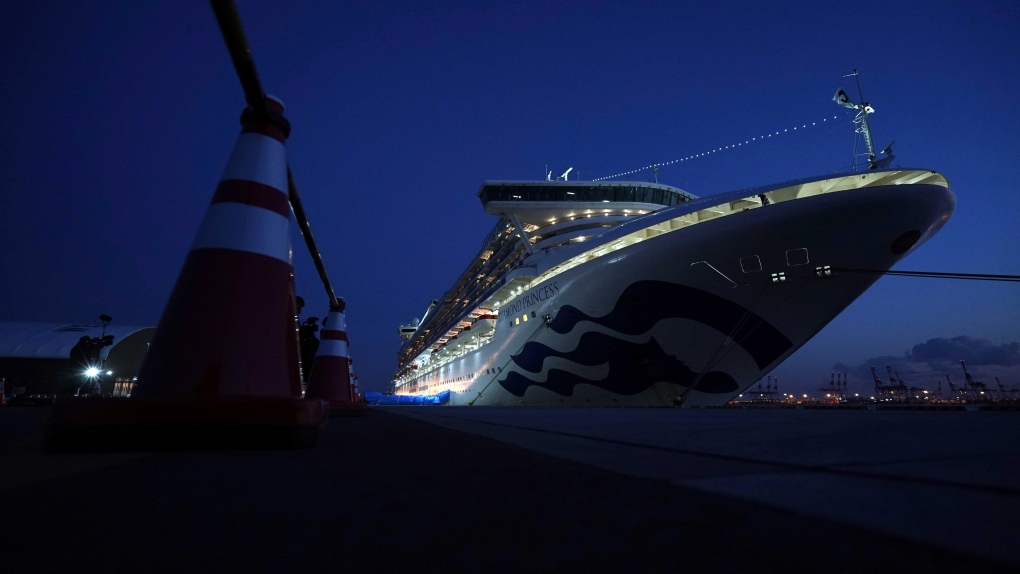 The cruise ship Diamond Princess anchors off the Yokohama Port Monday, Feb. 10, 2020. The operator of the ship said Monday that an additional 66 cases were found aboard. That is in addition to 70 reported earlier. (AP Photo/Eugene Hoshiko)

EDMONTON -- An Alberta couple quarantined on a cruise ship off the coast of Japan say they're not panicking, even after the number of cases on board doubled in recent days.

Jenny and Mark Rodrigue embarked on the Princess Cruises ship and were supposed to dock in Yokohama, Japan on Feb. 4.

But a day before their departure, the ship was put under a 14-day quarantine after 10 people tested positive for novel coronavirus, which has killed more than 1,000 people.

Since then, the number of infected passengers on the cruise has reached 135 people out of the 3,700 guests onboard, the Rodrigues said from their cabin late Monday night. Eight of the infected are Canadian.

"We've all been isolated since then," said Mark, adding that 271 people onboard have exhibited high temperatures. "So there's a very remote or slim chance we're all going to be in contact with somebody who has it now."

They've been able to stretch their legs by going for an hour-long walk twice in the last few days.

"They let out one half a floor at a time, and we have to stay a metre away from each other, wear a mask and gloves and all that food stuff," said Mark.

Another new change is that when meals are delivered to passengers rooms, they must wear masks and wash their door handles afterward.

The passengers are expected to be held until Feb. 19, but the couple isn't holding their breath.

"That's still the current plan but the health authorities can change that, depending on their determination on how the virus is acting," said Mark. "They're not going to put the country of Japan in any further danger than they already are. We'll just have to wait and see."

The waiting has been a challenge, but the couple said the ship's captain recently announced they could order goods from Amazon in the meantime.

They've ordered coffee and hot sauce, and Jenny bought some art supplies for some of the families with children onboard the ship.

Despite the ordeal, Jenny says cruise staff has treated them well — and things could be worse.

"We are very optimistic Canadians and we have lots of faith in the system that they're taking very good care of us," she said. "Shout-out to the captain, crew and authorities who are looking after us."

The Rodrigues are hoping to connect with other Canadians stuck on the ship via WhatsApp.

CTV News Edmonton has also spoken with another Alberta couple on the ship, Lolita and Hans Wiesner of Joffre.