Alta. oilfield town embraces 'the way of the future' by harnessing sun's power to cool its rink

A newly completed solar installation in Calmar, Alta., is ready to power the local arena.

Almost 11,000 square-feet of solar panels are now on the roof of the Mike Karbonik Arena in the town of 2,000 southwest of Edmonton. The 464 panels are expected to generate 165 megawatt-hours per year, about 98 per cent of the arena’s energy consumption, town officials say.

"Overall, we're anticipating at current electricity rates we'll be seeing a savings of about $5,000 a year. And we only expect that to go up as power goes up in price," councillor and deputy mayor Krista Gardner told CTV news Edmonton.

Calmar is in a partnership to provide recreational services to Leduc County residents as well. As such, the arena is one of the town's largest energy expenditures. Council expects to save $30,000 a year for the panels' lifespan of 25 years.

"The arena is a really important place in our community, and so to be able to make it more cost effective to run and more environmentally conscious is really just a win-win for us here," Gardner said. 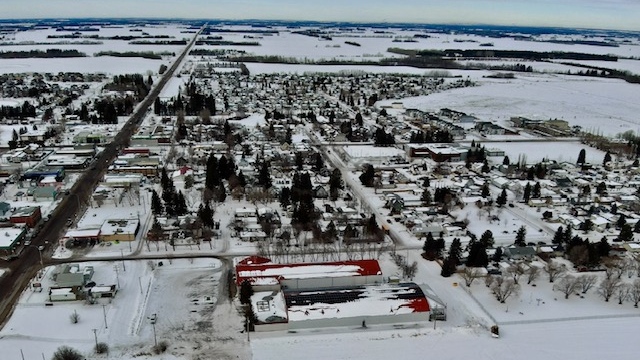 The Town of Calmar installed 11,000 square feet of solar panels on the roof of the Mike Karbonik Arena in 2021, and expects to save $30,000 on electricity costs for the panel's 25-year lifespan.

'THEY'RE JUST UP THERE'

The panels constitute an investment of roughly half a million dollars in sustainable energy.

Their $158,000 installation was covered by a grant through the Municipal Climate Change Action Centre, a body that receives provincial funding to help towns, schools and community organizations reduce emissions and energy costs.

The arrangement with ENMAX will see Calmar pay off the panels, which cost $380,000, over 15 years.

In the summer, when the arena's power draw is lower, the town will sell electricity generated by the solar panels back to the grid.

With maintenance provided by ENMAX, the setup has relatively little impact on operations, said Calmar's director of public works.

"They're really self sufficient. They're just up there and you don't look at them unless something goes really wrong," Ed Melesko commented.

A monitor will be set up in a common area so the public can see the array's output levels in real time.

"When I came, that wasn't even a dream that you would some day be doing that. You had your little solar powered things, but not to this level," Melesko said. "It's definitely the way of the future, though, from what I see."

Of course, he added, the bills will really prove the investment's value: "Next year will be the big test." 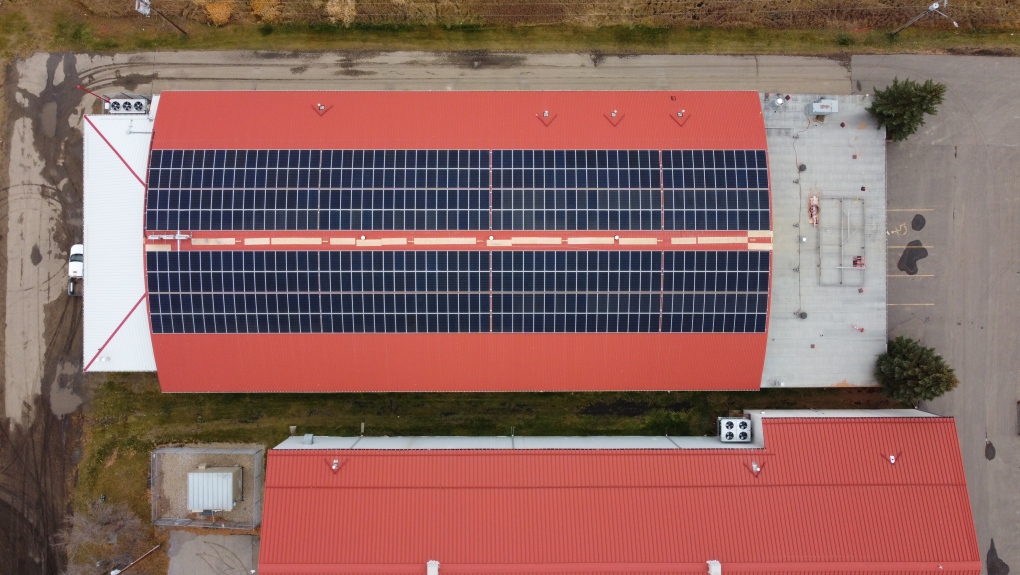 The Town of Calmar installed 11,000 square-feet of solar panels on the roof of the Mike Karbonik Arena. (Supplied)

But both Gardner and ENMAX are confident the panels will turn out worth their price.

"We are one of the sunniest locations, certainly in Canada, and North America. You do get some snow coverage, but the panels are now designed so that they can still reflect some of the solar energy that's coming on even if they have winter coverage on it," ENMAX's vice president in trading, origination and commercial sales, Bruce Borwick, told CTV News Edmonton.

The company is currently working with some 40 municipalities on solar projects.

"We see that both the ability to manage your energy source and not be reliant on the grid is really strong for a municipality. It brings in investment and attracts attention. The other benefit is ... the carbon footprint of the town is reduced considerably."

Calmar is not just located in oilfield country, but surrounded by drilling sites.

Gardner said despite its legacy, the town is committed to sustainability and reducing its fossil fuel reliance.

"As we look toward the future, we think it's really important to take advantage of some of these new technologies and ways to see both cost savings for our residents, to update our facilities, and also to do some environmental changes," she said.

The town has already upgraded its street and arena lights to LEDs. It is looking at doing the same in its public workshop and considering installing electric vehicle charging stations.

Monkeypox in Canada: Act now to stop it, expert urges, before it's too late

With 26 cases of monkeypox now confirmed in Canada, health officials warn that number will likely grow in the coming days and weeks. However, one expert says the outbreak can be stopped if the country works quickly to get it under control.

Canada's highest court has ruled that Alexandre Bissonnette, who murdered six people at the Quebec City mosque in 2017, will be eligible for parole after 25 years.

Johnny Depp's lawyers ask jury to give actor 'his life back'

Johnny Depp's lawyers asked a jury Friday 'to give Mr. Depp his life back' by finding that his ex-wife, Amber Heard, committed libel.

Ancient volcanoes may have created a rare resource for lunar explorers

Ancient volcanic eruptions on the moon could provide an unexpected resource for future lunar explorers: water.

The National Rifle Association begins its annual convention in Houston on Friday, and leaders of the powerful gun-rights lobbying group are gearing up to "reflect on" -- and deflect any blame for -- the deadly shooting earlier this week of 19 children and two teachers at an elementary school in Uvalde, Texas.

Former Canadian gymnast Abby Pearson Spadafora said on Thursday she had suffered years of abuse at the hands of Olympic coach Dave Brubaker and his wife Elizabeth and called for an independent investigation of the sport.