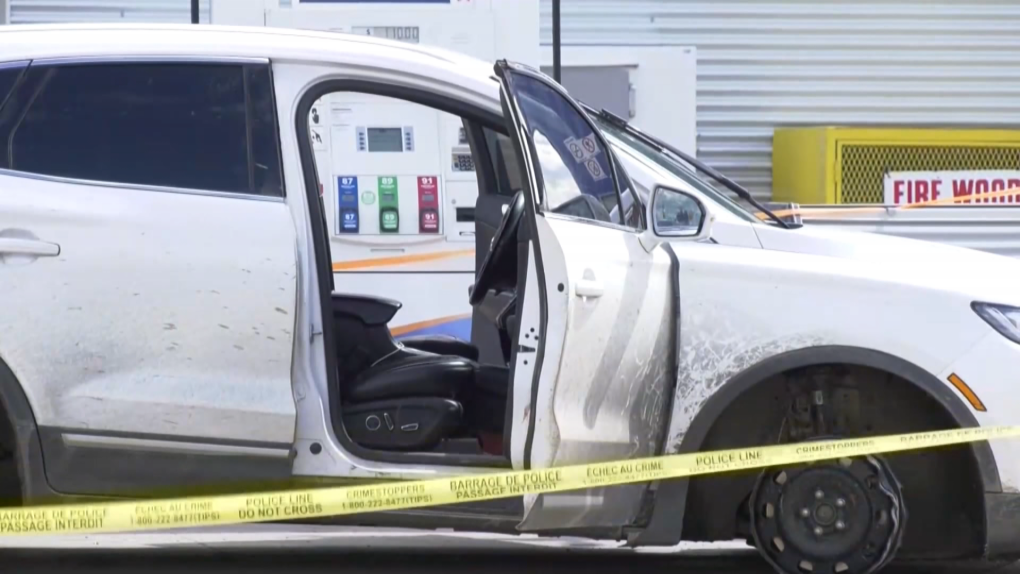 A white SUV sits at a Smoky Lake gas station. It's part of an investigation into a police shooting that killed one person.

The Alberta Serious Incident Response Team has released more information about a police shooting on Monday that killed one person.

According to ASIRT, police spotted a white SUV believed to be related to a domestic dispute complaint from the night before around 7:30 a.m. on Monday.

Police attempted to stop the SUV, but the driver fled the scene, ASIRT said.

Officers pursued and used a tire deflation device, which slowed the SUV down, but ASIRT said one of the occupants shot a gun in the direction of police officers.

ASIRT says the driver of the vehicle stopped at the Centax gas station in Smoky Lake, and a man and a woman got out. The man was carrying a gun, it said.

The pair stole a pickup parked at a gas pump, ASIRT said.

Officers then arrived at the gas station, and an officer fired a gun at the stolen pickup around 8 a.m. before the driver fled the scene again.

Police briefly lost sight of the truck as it left Smoky Lake, but later found it abandoned in a stand of trees.

Officers used police dogs to track the pair from that location.

Around 10:11 a.m., police saw the man in a field, and ASIRT says an altercation occurred that led to police firing their guns.

Both the man and the woman were wounded. A gun was found near the man, according to ASIRT.

EMS provided care at the scene, and the man was taken to hospital in Edmonton by STARS Air Ambulance.

The woman died at the scene.

ASIRT is now trying to find witnesses who may have seen or have video of the events.

ASIRT is called to investigate incidents involving Alberta police that result in serious injury or death, as well as allegations of police misconduct.