Growing up on a hobby farm on the northwest coast of British Columbia, Tracy Brindley has lived with many dogs in the past, but none quite as fashionable and fearless as Moose.

The one-year-old yellow Labrador sports his own beekeeping suit, co-inspects the hives, and even helps deliver honey produced by his owner’s urban bee colony in Edmonton.

Brindley says it all started when Moose showed interest while she was outside inspecting her backyard bees.

“I’d put him inside and he would be barking and his nose would be shoved against the glass,” said Brindley. “I was just a little nervous about bringing him out here because he was so curious all the time, and then I thought, ‘You know what? Maybe I could get him a bee suit.”

After no luck finding a dog bee suit online, Brindley decided to fit Moose with a beekeeping veil she already owned, which he’s been sporting ever since. 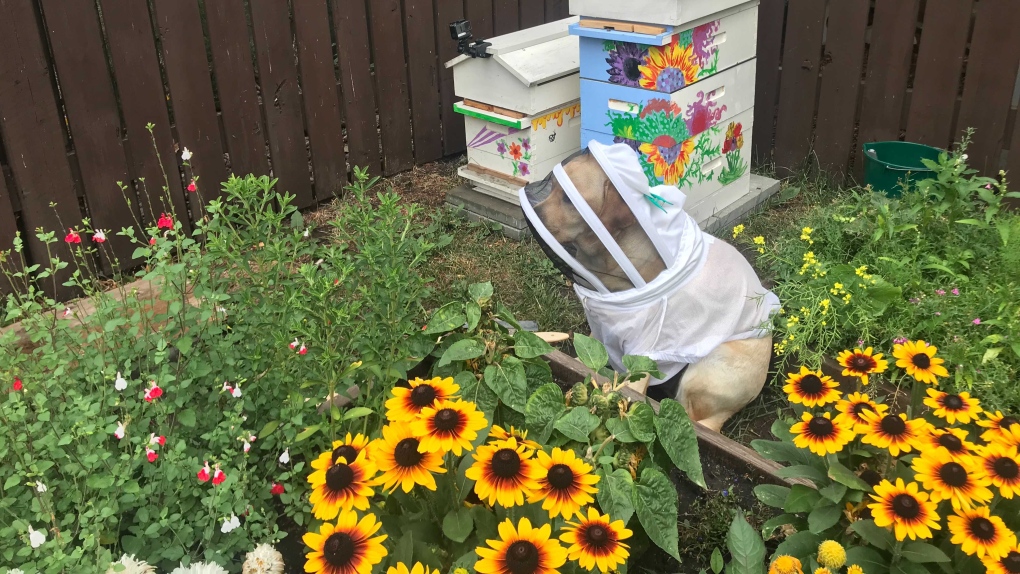 “Now when I do inspections he can come out with me. He can come right up to the hive,” said Brindley.

Brindley says Moose has never been stung, despite his curious demeanor. She will often find him at her heels during inspections, which involve exposing hundreds of honey-making bees.

“A few times I’ve looked behind me and he’s right there and it’s really hard to leave an open hive inspection and put your dog inside,” said Brindley.

Aside from keeping his owners company while they tend to bees, Moose tags along to deliver honey to friends and family. Brindley says this season she wants to create an addition to Moose’s beekeeping gear.

“I’m hoping to design a harness that can hold the honey jars.”

Moose not only delivers the honey, he also gets to taste it.

“When I have a honey jar I can’t scrape any more honey out of, I give it to him and he gets as far in there as he possibly can,” said Brindley. “He’s a lab, they love food, but especially honey.”

Happy Friday- my dog now insists on helping with the bee hives. In related news i think im a yuppie pic.twitter.com/MefGhiymXR

Long-term care outbreaks are rising, and provinces have different strategies for keeping COVID-19 out

As the fourth wave continues across Canada and community spread climbs, outbreaks are also on the rise inside Canada’s long-term care homes, leading experts to stress the importance of staff being vaccinated — an issue which varies province to province.

The boyfriend of Gabby Petito, whose body was found at a national park in Wyoming after a cross-country trip with him, was charged with unauthorized use of a debit card as searchers continued looking for him Thursday in Florida swampland.

Ont. mother who camped outside premier's office will have son's autism file looked at:, minister