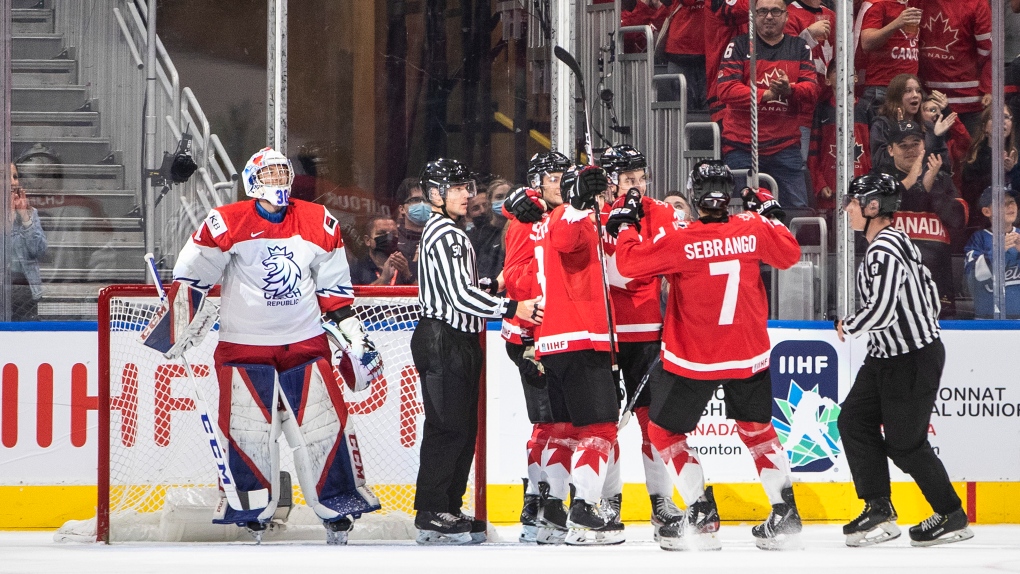 Canada will play for gold at the world junior hockey championship after downing Czechia 5-2 in a semifinal on Friday.

Kent Johnson had a goal and two assists for the undefeated Canadians (6-0-0) while Logan Stankoven contributed one of each. Connor Bedard, Mason McTavish and Joshua Roy also scored and Olen Zellweger added three of helpers.

Jan Mysak got Czechia - the country commonly known as the Czech Republic - on the board midway through the third period and added an assist on David Jiricek's power-play tally later in the frame. Jiri Kulich helped on both goals.

Dylan Garand stopped 31-of-33 shots for Canada, which won silver at the 2021 tournament.

Goalie Tomas Suchanek made 22 saves for Czechia (2-3-1) before being replaced by Pavel Cajan to start the third period. Cajan stopped eight shots in relief.

Canada will face either Finland (4-1-0) or Sweden (4-1-0) in Saturday's gold-medal matchup. The two sides are set to face off in the second semifinal on Friday.

Czechia was coming off a massive 4-2 upset victory over the reigning champion Americans in Wednesday's quarterfinals. Canada earned its spot in the semis with a 6-3 win over Switzerland the same day.

The Canadians restored their three-goal advantage with 5:34 left on the clock when Roy swept a low shot in through Cajan's pads.

Czechia had whittled the deficit to 4-2 with a power-play tally 12:44 into the third.

Jiricek unleashed a long bomb from inside the blue line, sailing the puck through traffic and beating Garand glove side.

The Czechs got on the board midway through the third when Mysak sent a shot through the Canadian netminder for his fifth goal of the tournament.

Looking to make up some ground in the final period, Czechia replaced Suchanek with Cajan coming out of the second intermission.

Canada's second power-play goal of the day came 16:21 into the second after Czechia's Stepan Nemec was called for slashing.

McTavish capitalized, uncorking a one-timer from the faceoff circle that went in off the crossbar, boosting Canada's lead to 4-0.

A penalty for too many men also cost the Czechs in the second.

With Czech forward Tomas Urban in the penalty box, Johnson picked up a loose puck along the boards and sliced it up the ice to Stankoven for a breakaway.

The Kamloops Blazers forward took a few strides then blasted a shot past Suchanek from the hash marks to give Canada a 3-0 at the 11:28 mark.

Canada was 2-for-3 on the power play Friday while Czechia went 1-for-2.

The Czechs came into the second with renewed fire and outshot the Canadians 8-0 over the first five minutes of the period.

Garand was forced to make a solid pad save 3:55 into the frame after a defensive breakdown gave Czechia's Jakub Kos a prime opportunity in tight.

Canada took a 2-0 lead into the first intermission after Bedard put away the country's second goal of the day late in the opening period.

Nathan Gaucher sliced the puck through the neutral zone, springing the 17-year-old phenom for a breakaway. Bedard capped the play with a blistering shot past Suchanek glove side, giving the host nation a 2-0 cushion 15:20 into the game.

The goal was Bedard's fourth of the tournament.

Suchanek made a brilliant diving stop on Tyson Foerster's backhand shot midway through the first to keep the game scoreless.

The Czech netminder couldn't hand on to the puck, though, and Johnson wasted no time in firing it in from the top of the crease to open the scoring 10:04 into the opening frame.

Johnson has two goals in the tournament - both against the Czechs.

Sweden (4-2-0) and Finland battled through a scoreless first period on Friday before Finnish defenceman Kasper Puutio broke the deadlock with a power-play goal 5:18 into the second.

The Swedes had a prime opportunity to equalize late in the frame when back-to-back penalties left the Finns down two men for more than 90 seconds but couldn't get a puck past goalie Juha Jatkola.

Jatkola stopped all 23 shots he faced across the game and Jesper Wallstedt had 27 saves for Sweden.

Sweden will face Czechia in the bronze-medal game on Saturday.

NOTES: Canada was playing without forward Ridly Greig, who suffered an apparent shoulder injury early in the quarterfinal win over Switzerland. Riley Kidney slotted back into the lineup after being a healthy scratch for four straight games. | Canada beat Czechia 5-1 in the preliminary round. | Czechia has not won a medal at the world juniors since 2005 when they took home bronze.

opinion | Naheed Nenshi: A moment that changed the fabric of this country forever

Fifty years ago, there was a moment that changed the fabric of this country forever, Naheed Nenshi writes in an exclusive column for CTVNews.ca. For arguably the first time, Canada extended its hand to refugees who looked different, who worshipped differently than most Canadians, but who needed help, the former Calgary mayor says.

Russia was poised Wednesday to formally annex parts of Ukraine where occupied areas held a Kremlin-orchestrated 'referendum' -- denounced by Kyiv and the West as illegal and rigged -- on living under Moscow's rule.