Residents of a number of central Alberta communities have begun a massive clean-up effort, after a massive storm – which some said included a tornado – tore through the area Tuesday afternoon.

CTV News has learned at least two farms suffered major damages to a number of structures.

Resident Nigel Scott said the storm hit his property was hit in the mid-afternoon on Tuesday, in an area southeast of his home.

Now, Scott is one of many picking up the pieces of what used to be a number of buildings, including the roof of his attached garage.

“So this hay shed, which is about 120 foot long by 60 [feet] wide, is completely demolished,” Scott said Wednesday.

Scott told CTV News he believes whatever hit his farm, could have been a tornado.

“The reason why I would consider it by any standards a tornado is that…it was obviously twisting, with some trees lying to the west, and some to the east,” Scott said.

However, Environment Canada officials said they needed more evidence to confirm a tornado touched down in the area.

“Given the evidence we have right now, it is a possible tornado touchdown,” Dan Kulak with Environment Canada said. “We need more evidence to say if it was a probable [tornado] or confirmed.”

Scott and his neighbours were busy Wednesday, cleaning up the mess – one said they had never before seen such a storm dole out so much damage like the one they saw the day before.

“This is a reminder of the power of summer storms in Alberta, whether it’s tornadoes or straight line winds,” Kulak said.

Environment Canada officials said the storm near Olds was categorized as an ‘F1 Wind Event’, a name that refers to weather events that include winds that reach up to 170 kilometres per hour.

To compare, a wind warning is issued when winds reach up to 90 kilometres an hour.

The Didsbury area was not the only one struck by powerful storms on Tuesday – farther north, a Red Deer grocery store had to close suddenly when storm drains backed up, and drivers had to deal with heavy hail.

Officials said no injuries were reported.

As for Scott and his family, he hopes insurance will cover the damages, and he’s keeping a positive outlook.

“It’s about the only healthy way,” Scott said. “If I’m going to sit there and cry then I’m not doing anything useful.”

With files from Bill Fortier 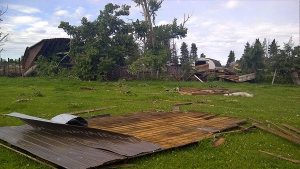 A severe summer storm ripped through central Alberta leaving a path of destruction on July 3.