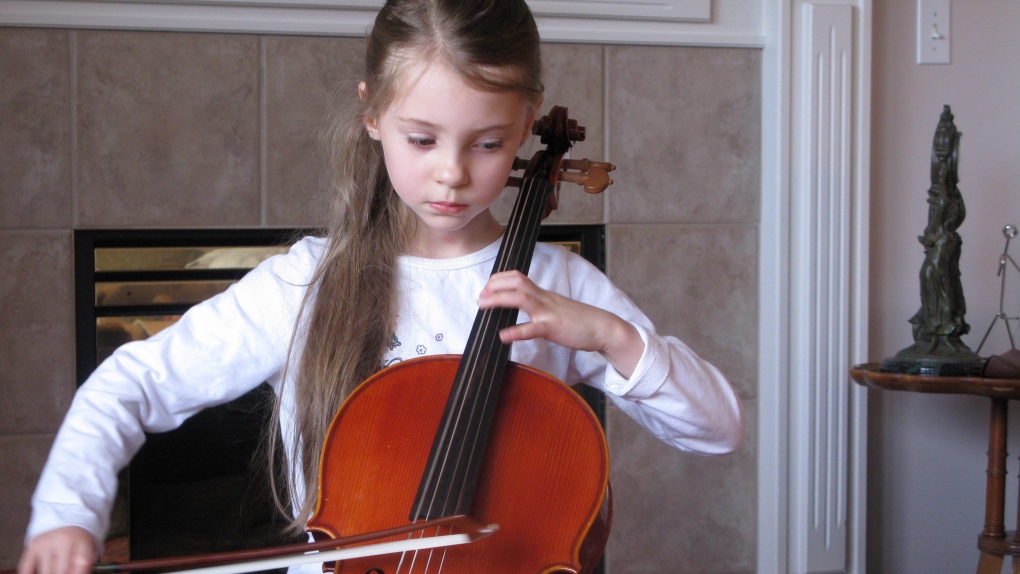 Six-year-old Luka Coetze practices her cello at her teacher's home in Calgary on Friday, Oct. 21, 2011. (Bill Graveland / THE CANADIAN PRESS)

A little bit of musical training can go a long way when it comes to the adult brain, according to a new study published this week.

The study out of Northwestern University looked at how the adult brain is shaped by musical training earlier in life.

Researchers measured the amount of neural activity in adults’ brain stems and found that the electrical impulses are stronger in the musically trained brain versus the untrained brain.

The study showed that musical training can improve listening skills, the processing of sound and strengthen attention spans.

Compared to study participants with no training, those with as little as one to five years of music lessons showed enhanced responses to complex sounds.

“If you’re learning an instrument, the first thing you have is an impression in your head of the note you want to play,” Levitin told CTV’s Canada AM on Friday. “As soon as the sound comes out of your instrument you have to compare it to what your mental image was, so there are all these comparative processes going on in the brain…if the sound didn’t come out the way you thought, you have to adjust it.

“It is really a multi-dimensional process for the brain to figure all of this out.”

Levitin, who authored the best-selling book ‘This Is Your Brain on Music’, said that motor co-ordination is strengthened when playing music with a group.

“When you’re playing with other people you have to step outside yourself. You have to be co-ordinating what you’re doing with what they’re doing.”

While the type of instrument played doesn’t have any bearing on the positive effects on the brain, Levitin said some instruments are easier to take up than others.

“The piano is probably easier than the violin. It’s easier to get a good tone out of the instrument,” he said. “On the violin, you’re spending two years just to make it not sound like you’re strangling a cat.”