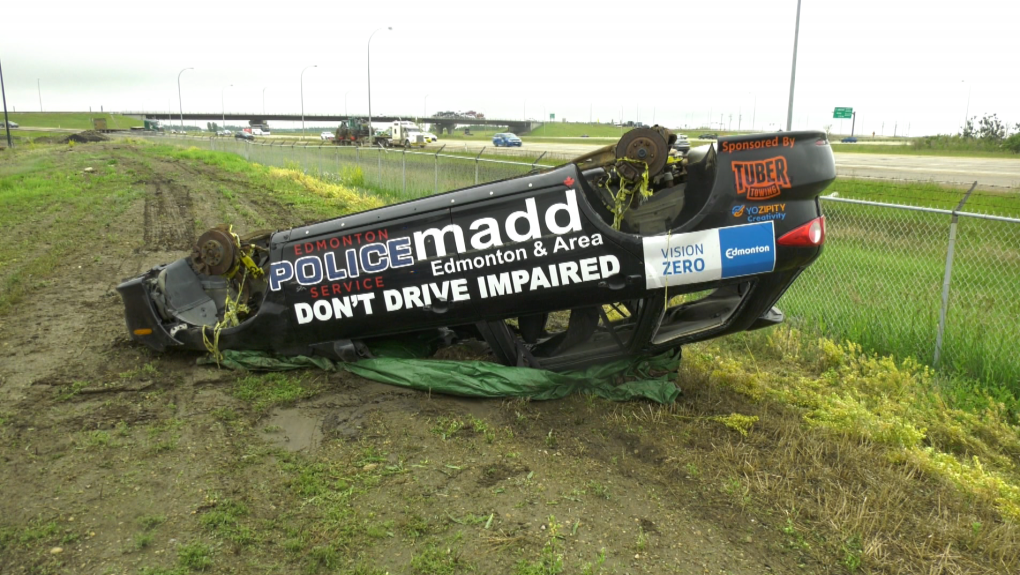 MADD Edmonton is using a crashed car to try and remind Edmontonians not to get behind the wheel when drinking or using drugs. (Dave Mitchell/CTV News)

Mothers Against Drunk Driving (MADD) are asking people to look at the consequences of impaired driving.

The organization began its crashed car initiative on Wednesday - placing a bashed and battered upside down car outside of Blackjacks Roadhouse in Nisku. MADD hopes the visual reminder will raise awareness on the dangers of impaired driving.

“It's an exceptional visual reminder that this thing is still happening, it’s not going away,” said Allison Tatham, MADD Edmonton president, whose father was killed eight years ago by a drunk driver. “We need to keep pushing that message so that people understand the impacts of impaired driving not only for them but for the people they love.”

Lynda McCullough’s daughter, Jennifer Leigh, was killed by a drunk driver in December 2003. She said she hopes people see the crashed car and are shocked into thinking about the consequences of driving impaired.

“Even elementary school kids know the mantra, ‘Don’t drink and drive,’” McCullough said. “Sadly, I think you have to have someone touched by that reality before it hits home. And it’s sad.”

The crashed car will move around the city until September - in an attempt to remind drivers and passengers not to ride with impaired drivers, plan ahead when drinking or using drugs, and never get behind the wheel impaired.

If you see an impaired driver, call 911.

A B.C. man who admitted to attacking his pet kitten so brutally the animal had to be euthanized has been sentenced to spend four months behind bars.