Edmonton weather for July 16: Temperatures return to seasonal as smoke comes in and out 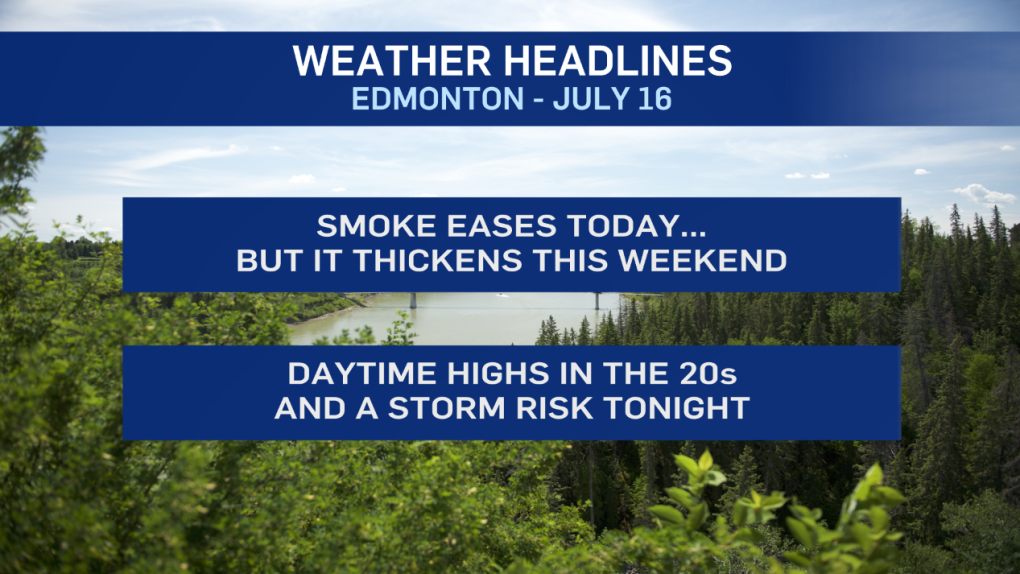 We're into a "cooler" few days with daytime highs in the low to mid 20s in Edmonton today, Saturday and probably Sunday as well.

Part of that is the atmospheric setup...part of that cooling is thanks to the smoke.

Air quality was a real issue on Thursday in Edmonton. We were anticipating a bit of clearing overnight and this morning.

That HAS happened and the AQHI (Air Quality Health Index) is on the LOW risk end of the scale this morning.

That will probably climb to the MODERATE risk range later today. But, the smoke shouldn't be as bad as yesterday.

Then, we're expecting to see the mid-level wind swing around to a more easterly direction this weekend.

So, instead of getting BC wildfire smoke...we're expecting SK smoke to blow into the eastern (especially NE) half of the province.

For Edmonton and area, today might be our least smoky day until early next week as conditions will probably get worse this weekend.

I'm thinking the AQHI will be in the HIGH risk range (maybe even pushing the VERY HIGH range at times).

Some rain would help. I've been reading differing opinions on how MUCH clearing you can get from rain.

Bottom line seems to be - it doesn't completely remove the smoke from the air, but does help.

AND...there actually IS a good chance of precipitation in and around Edmonton tonight.

Parts of the metro region had some showers Thursday night (most areas got missed).

Today, we'll see some storms bubble up in western AB and those will track ENE through the evening.

The most likely ETA for showers/storms in the Edmonton region is late this evening and overnight (possibly spilling into early Saturday morning).

There is a risk some of the storms that develop later today will turn severe. So, keep an eye out for any alerts if you're in areas from Edmonton south to Red Deer and from Grande Cache south to Airdrie.

The weekend brings some rain to northern Alberta on Saturday. The best chance for some steadier precip is from Peace River east to Fort McMurray.

Temperatures in most of central and northern AB will be in the low 20s Saturday and low to mid 20s Sunday.

AQHI in the low to moderate range.

Tonight - Mostly cloudy. 70% chance of showers and/or thunderstorms late in the evening and overnight.

Saturday - 40% chance of showers early in the morning. Mix of sun & cloud in the afternoon.

30% chance of a scattered shower or thunderstorm late in the day.

Authorities said a body discovered in northern Wyoming was believed to be that of a 22-year-old Gabby Petito who disappeared while on a cross-country trek with her boyfriend Brian Laundrie, now the subject of an intense search in a Florida nature preserve.

Lava from Spanish volcano heads toward sea; no injuries, 5,000 evacuated

Lava continued to flow slowly from a volcano that erupted in Spain's Canary Islands off northwest Africa, but the head of the regional government said Monday he expects no injuries to people in the area after about 5,000 were evacuated.