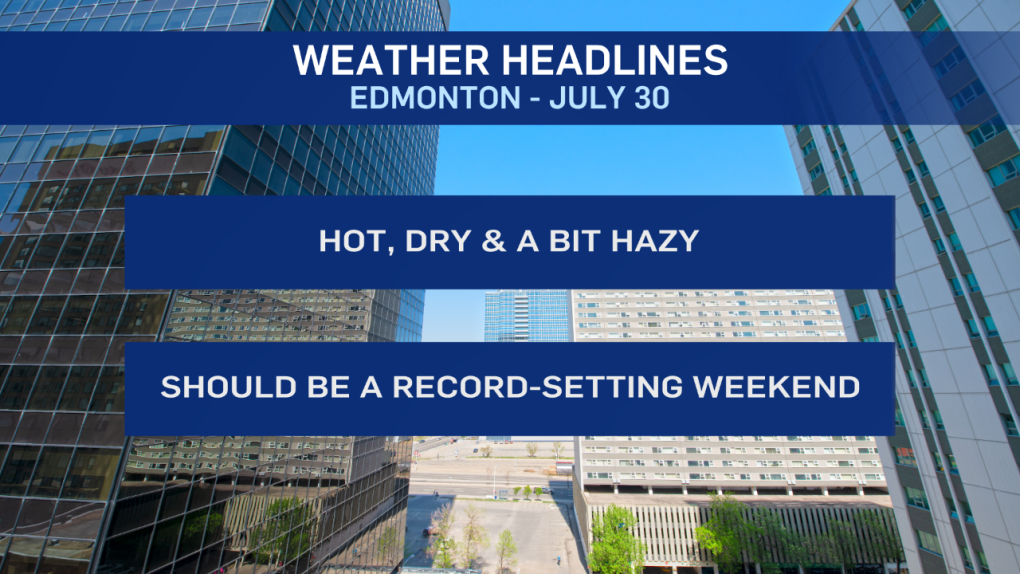 AND...if you're hoping for some moisture, you're out of luck until next week.

Dry and hot for the next few days in the Edmonton region. In fact, it'll be hot and dry across most of the province.

A bit of high-level haze moved in over Edmonton Thursday. That wildfire smoke from B.C. didn't make its way down to the surface as Air Quality remained in the 3-4 range. (Three is a "low risk" on the Air Quality Health Index, while 4 is a "moderate risk" on the AQHI.)

I'd expect to see similar conditions through the long weekend. The upper level flow wants to bring in some smoke from the southwest.

However, the surface winds will be favorable - most will be northerly or easterly through the next few days.

So, expect a bit of haze and some "orange-y" skies near sunrise/sunset. But, the AQHI should remain low to moderate.

Nothing moderate about the temperatures though.

In Edmonton, we'll take a run at a couple of records as the heat streak peaks with highs in the low to mid 30s this long weekend.

Sunday still looks like it'll be the hottest of the three days with a forecast high of 33 C.

Monday's projected to be 32 C and Saturday has a forecast high of 31 C.

I'll get into those numbers a little bit more in a minute.

First, let's deal with the potential records in order of likelihood to break them.

Here's my thinking with the forecast highs:

I'm always just trying to be within a degree or two of the actual high.

Monday's a bit trickier, but the models have been trending hotter for Heritage Day. So, I don't think we end up with a high below 30...but it's won't be as hot as Sunday.

Today - Some clouds this morning. Sunny this afternoon.

Monday - Partly cloudy. 30% chance of a late-day shower or thunderstorm.

While Canadians didn’t have to wait too long on election night to find out who will lead the next government, there are still several individual seats too close to call and it could take a few days to get clear results with many mail-in ballots still to be counted.

Further deliveries of COVID-19 vaccines to Canada are on pause because provinces already have more doses than they can currently use.