Edmonton weather for June 1: Get set to bake, heat warning in place 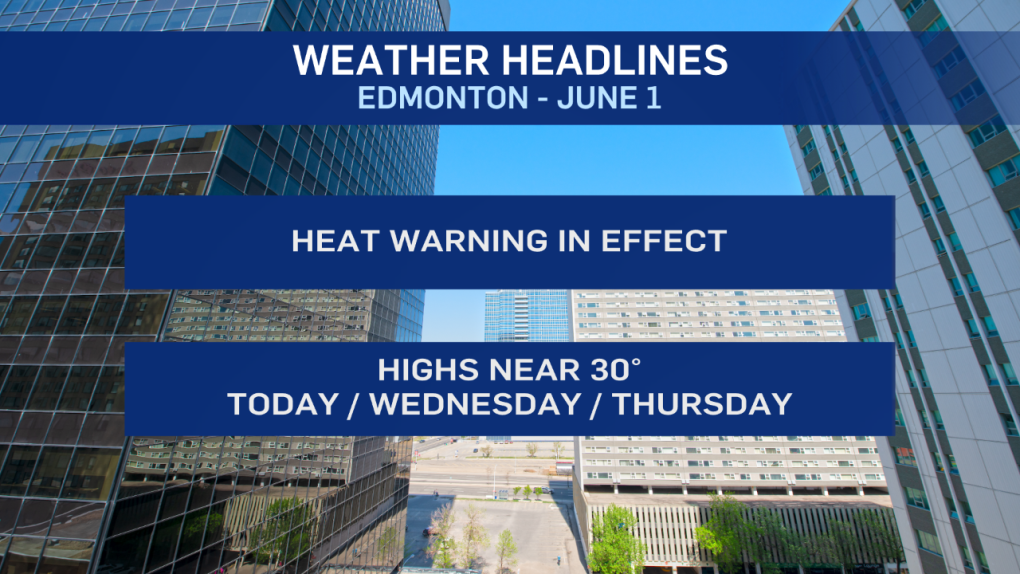 Heat warnings are in effect for the Edmonton region and a large part of northern and eastern Alberta.

By the end of today, those warnings will likely be expanded to include most of the province (with the exception, perhaps, of the western edge of Alberta).

The criteria for a heat warning in Alberta is: two or more days with highs 29 C or hotter and lows in the mid teens.

(NOTE: the exception is extreme southern Alberta where the daytime highs need to be 32 or hotter to qualify for a heat warning.)

An upper ridge is settling over the province for a few days. That bubble of warm air aloft makes it unlikely for any late-day storms to develop in the heat.

So, we have some clouds out in the Edmonton area this morning. But, those will clear off and we'll be sunny this afternoon and Wednesday.

There's a bit of a breeze in the forecast for this afternoon (15-20 km/h), but nothing TOO gusty.

Temperature will hit a high near 28 C in Edmonton this afternoon.

Wednesday looks to be the hottest day with a forecast high of 31. (Record high for June 2nd is 32 C.)

Thursday's another scorcher with a forecast high of 29 C.

So, we'll see some cooler air move into west and northwestern Alberta Thursday. Edmonton and area "slips" to a high of 25 C (still above average by a handful of degrees).

It's the weekend that we'll REALLY see the heat streak break. Daytime highs will be in the 16 to 20 degree range Saturday and Sunday.

No significant chance of showers or thunderstorms today or tomorrow.

There might be some storms developing in western Alberta late Thursday.

Lots of uncertainty with storm/shower development Thursday-Sunday in the Edmonton region.

For now, I have a risk of late-day showers or thunderstorms in the forecast for Friday. Saturday also has a chance of showers.

But, don't bet on the weekend forecast just yet.

I'm certain it'll be cooler. However, sky/precipitation conditions are TBD.

Today - A few clouds this morning. Sunny this afternoon.

Wednesday - Sunny with a few clouds.

Canada has now fully vaccinated 78.77 per cent of the country's eligible population.

Authorities said a body discovered in northern Wyoming was believed to be that of a 22-year-old Gabby Petito who disappeared while on a cross-country trek with her boyfriend Brian Laundrie, now the subject of an intense search in a Florida nature preserve.

Lava from Spanish volcano heads toward sea; no injuries, 5,000 evacuated

Lava continued to flow slowly from a volcano that erupted in Spain's Canary Islands off northwest Africa, but the head of the regional government said Monday he expects no injuries to people in the area after about 5,000 were evacuated.