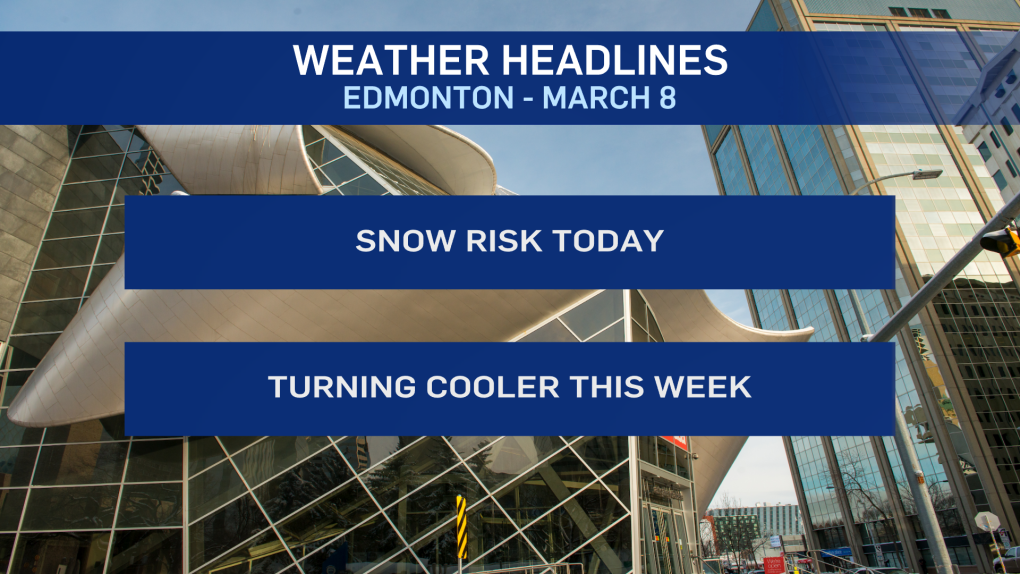 EDMONTON -- After a weekend that saw Edmonton hit highs of 9 C on Saturday and 8 C on Sunday, we're in for a cooldown this week.

Temperatures should still make it above zero today and Tuesday.

But, Wednesday and Thursday will likely stay below freezing all day.

Afternoon highs near -5 C are likely both those days with a chance of some flurries or light snow on Wednesday.

We also have a decent chance of some flurries or snow in the Edmonton region today.

Right now, it's tough to tell if it'll just be a dusting OR 5 to 6 centimetres of snow accumulation.

Here's the problem: There's a NARROW band of snow that'll stretch from somewhere around Grande Prairie southeast towards Edmonton.

Areas stuck beneath that band will pick up several centimetres of snow over the course of the day.

BUT...areas as little as 50 kilometres away from that narrow snow zone won't get anything.

So, depending on where the front lies, you could see widely variable snow totals even within different parts of the city.

Bottom line: Prepare for some snow today. If it hits, you were ready. If that band misses you, no harm done.

Tomorrow looks a degree or two warmer than today with some sun in the afternoon.

Today - Mostly cloudy with a few flurries or periods of snow.

1 to 5 cm of accumulation possible.

Tuesday - Cloudy in the morning. Clearing in the afternoon.