Edmonton weather for May 14: A weekend in the 20s 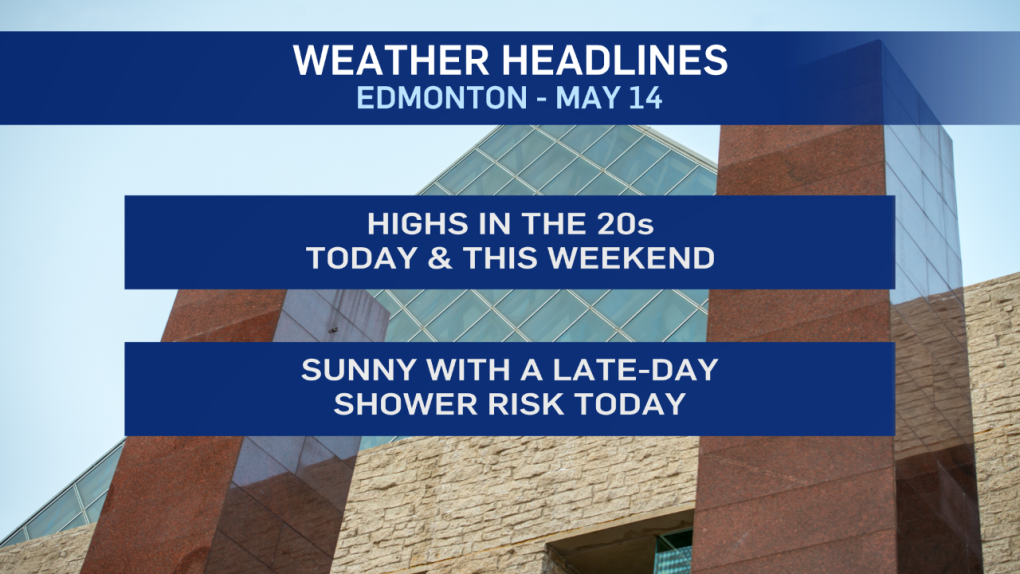 EDMONTON -- Similar setup to what we had yesterday in central and north-central AB.

Morning sun will give way to some afternoon clouds and some scattered showers and thunderstorms will develop.

It's impossible to pick out exactly where and when those showers will develop.

But, the most likely areas would be to the north and west of Edmonton this afternoon.

The Edmonton region DOES have a risk of an afternoon shower. However, the early evening hours look a bit more likely (IF we're going to see anything).

Outside of that risk of a brief shower...it'll be another beautiful May day.

Temperatures should climb to 17 C by noon and up to a high near 21 C this afternoon.

It's still shaping up even warmer for the weekend with highs of 22 C on Saturday and 25 C on Sunday.

Sunshine Saturday with some evening clouds in the Edmonton area.

Northern Alberta could get some showers tomorrow.

Sunday's a bit more of an uncertainty for sky conditions. I think we'll probably just be partly cloudy.

But, there's a chance of some thicker cloudcover developing late in the day.

LONG range outlook: It appears we're in for a pattern shift next week with clouds, rain and cooler temperatures.

It's still a ways off. But...as of right now, my forecast has highs in the 10 to 15 range with a good chance of precipitation on Wednesday through Friday.

Today - Sunny this morning. Mix of sun & cloud this afternoon.

Slight risk of a shower or thunderstorm.

Tonight - 30% chance of a shower in the evening, clearing overnight.