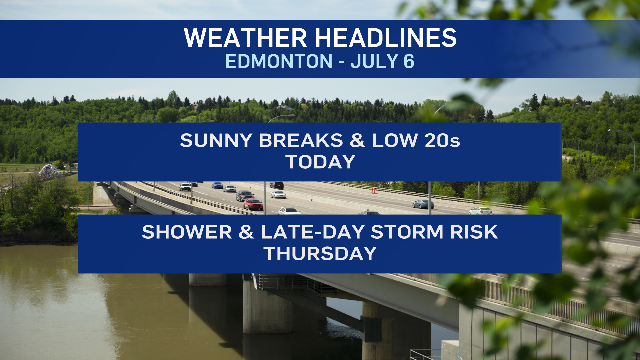 Edmonton and area should get back to the low 20s this afternoon with a bit of sun breaking through the clouds.

Thu/Fri should get to highs around 24 C.

That's still a ways off. But, I have a moderate amount of confidence in next week's heat panning out.

Back to the more immediate future - no significant precip expected in the Edmonton region today, or across most of north-central and northern AB.

There might be an isolated shower that pops up somewhere...but, most areas will be dry today.

It's a different story for Thursday.

We have a chance of showers in the Jasper/Edson regions in the morning and then north into the Peace Country midday tomorrow.

There's a slight risk of a spotty shower near the Edmonton region in the morning. But, it doesn't look like much, if anything.

Thunderstorms are expected to develop in the foothills in the afternoon and evening.

Those showers and storms could hit areas from around Edmonton south to Red Deer late afternoon and through the evening hours.

In fact, Thursday night looks like it's probably the most likely timeframe for some storms (if we're going to get hit).

That's not what Elks fans want to hear, as they're hosting the Stamps at 7 p.m. Thursday.

At this point, if you have plans to go to the game - prep for some wet and possibly stormy weather.

If the cells dance around us, bonus. If they hit, at least you're prepared.

Today - Cloudy this morning. Mix of sun & cloud this afternoon.

30% chance of a spotty shower in the morning.

40% chance of a shower or thunderstorm in the afternoon.

70% chance of a shower or thunderstorm in the evening.

Saturday - Sunny with a few clouds.

Sunday - Sunny with a few clouds. Slight risk of a late-day shower or thunderstorm.

There is not enough evidence to open a formal church investigation into sexual assault allegations against Quebec Cardinal Marc Ouellet, Pope Francis said Thursday. The pontiff issued his statement through Matteo Bruni, director of the Holy See press office.