Josh Classen's forecast: Snow today and then even colder tomorrow

Josh Classen's forecast: Snow today and then even colder tomorrow 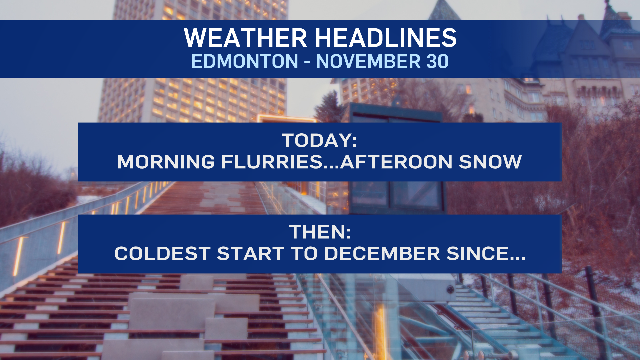 We haven't hit the bottom of the cold spell yet. That'll come Thursday/Friday/Saturday.

It'll be the coldest first week of Decemer since... 2013. (Probably not as long ago as you might've guessed.)

We'll get to that in a moment, first let's talk snow. Some flurries will move through into the Edmonton area this morning and then intensify a bit this afternoon.

By the time it moves out of the area this evening, we'll probably have 2 to 5 cm of fresh snow on the ground (and it looks like 5 cm is more likely than 2 cm).

With most of that snow coming this afternoon, the evening commute will be affected far more than the morning commute.

Areas north of Highway 16 will get progressively lower amounts the further north you are with the Grande Prairie, Slave Lake Cold Lake areas only getting a dusting to 2 cm.

It's areas near Red Deer and east and south of that area that could get the most snow (potentially 5 to 10 cm).

Wind speeds in the Edmonton region should be around 15-20 km/h.

So, that's not TERRIBLY strong. But, it's enough to create a bit of blowing snow in exposed areas and along outlying roads and highways.

Temperatures should hold fairly steady around -16 C much of the day and that'll mean wind chills around -23 C for most of today.

Wind eases overnight tonight and I have the city dropping to around -21 C Thursday morning.

IF skies clear a bit sooner than I'm expecting, we could be a couple degrees colder.

Sunny with a few clouds and a high near -19 C Thursday afternoon (with almost no wind).

There's a real shot at hitting -30 C on Friday morning. I currently have a morning low of -29 C.

Saturday morning should also be in the -25 C to -30 C range (but, probably a degree or two "warmer" than Friday morning).

Temperatures are expected to stay in the -20s ALL DAY Friday.

Saturday afternoon climbs to the mid minus teens.

We'll probably return to highs in the minus teens for Monday/Tuesday.

Looking LONG range - there's a chance we get into some milder air for the middle to the end of next week. But, we'll probably still remain colder than average (average highs next week are in the -4 C range).

Back to that "coldest since" issue:

Three of the past five years have had really mild starts to December.

***We'll probably have a high below -20 C in the first week of December.

***Edmonton will drop below -25 C in the first week of December.

That hasn't happened since 2013 (it happened FOUR times that year).

***Edmonton might hit -30 C in the first week of December this year.

So...you might be wondering, "what happened in the rest of December 2013?"

History doesn't often repeat itself. BUT...it does give us a guide.

AND...that guide shows us we probably won't stay cold for the entire month.

However, the month as a whole ended up about four degrees colder than average.

Friday - Sunny with a few clouds.