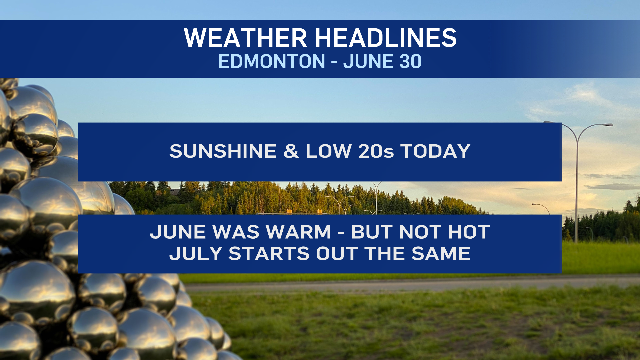 Some morning sun will give way to partly cloudy skies in the Edmonton region this afternoon.

Temperatures are expected to top out in the low 20s, close to average...but definitely not hot.

That's basically the entire month in a nutshell.

Warm, but no heat. I'll get into the numbers in a bit more details below. But...let's look ahead before looking back.

It should be a relatively quiet day weather-wise in the Edmonton region.

There's a slight risk of a brief, isolated shower in the area this afternoon.

Most of the region will miss out on that.

NW Alberta looks like the best bet for some showers and/or thunderstorms today.

Canada Day has will probably get a bit wet for at least parts of the day.

The afternoon hours are the most likely timeframe for some showers to push through. But, there could be some in the Edmonton area as early as late-morning/midday and possibly in the early evening.

The foothills and the Red Deer region have the greatest likelihood of seeing some late-day thunderstorms.

Temperatures will be highly dependent on whether or not we actually get some showers and WHEN they hit.

If they arrive midday, we may only get to about 19 C. If they miss most of the city or arrive a bit later, we'll get to the low 20s.

Either way - warm, not hot.

Saturday's shaping up to be cloudier. There's not a ZERO chance of precipitation, but it's a low enough risk that I've left it out.

Temperatures near 20 for a high.

Sunday should be a bit sunnier and into the low 20s in Edmonton.

OK...here are the details on June temperatures for Edmonton:

We'll end the month with an average daytime high about a tenth of a degree above "normal."

The average is seven days.

For context - here are the past 10 Junes and the number of days above 25 degrees:

So...it's not like we're in uncharted territory. Four of the past 10 years have had only two or three days of the 25+ heat.

Looking ahead - I doesn't appear we're in for much 25+ heat in the next five or six days.

By the end of next week we might get into the mid to upper 20s.

BUT...at this point last week...it appeared we'd have some heat for the Canada Day long weekend and that likelihood has completely disappeared.

So, we'll see how things play out.

Friday - Cloudy with a few sunny breaks. 60% chance of a shower midday and/or in the afternoon.