Josh Classen's forecast: Week starts cool, but the warmth is coming back

Josh Classen's forecast: Week starts cool, but the warmth is coming back 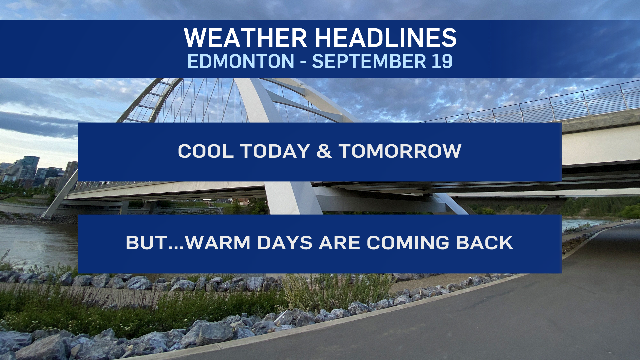 Autumn officially begins Thursday, and it was definitely feeling like the end of summer this past weekend.

Daytime highs of 16 C on Saturday and 17 C on Sunday put us right around average for this time of year and we'll be BELOW average today and Tuesday.

We'll see afternoon temperatures top out in the low to mid teens in Edmonton and area.

Highs near 20 C will be back in effect starting Wednesday and continuing right through the coming weekend.

The long-range outlook for next week also Edmonton and area sitting in the 20s for daytime highs.

Before we get back to the dry and warm weather, we have some precipitation today and then some frost concerns for a few areas.

An area of showers moving through the Edmonton region early this morning will move off into east-central Alberta by midday.

BUT...we also have some scattered showers in parts of northern Alberta this morning and we may see some precipitation slide south into the Edmonton region this afternoon and/or this evening.

It's definitely not going to rain ALL DAY. But, we'll be cloudy and cool all day with a chance of a few scattered showers in the area late this afternoon and possibly this evening.

After today...it looks dry in the Edmonton region and across the rest of central and northern Alberta for the rest of the week.

Clearing this across the northwest later today will put much of northwestern Alberta at risk for frost and areas in the Hinton/Edson regions will be right around the freezing mark Tuesday morning as well.

Clouds overnight should help insulate the Edmonton region enough that we'll stay above 0 C, even in outlying regions.

BUT...Wednesday morning will probably have temperatures near 0 C IN the city and just slightly below zero in surrounding areas.

After that, warmer air moves in and the frost risk disappears for a while.

Today - A few showers in the area this morning. Mostly cloudy this afternoon.

30% chance of an afternoon shower.

Tonight - Mostly cloudy. 30% chance of a shower this evening.

Tuesday - Mostly cloudy in the morning. Clearing in the afternoon.