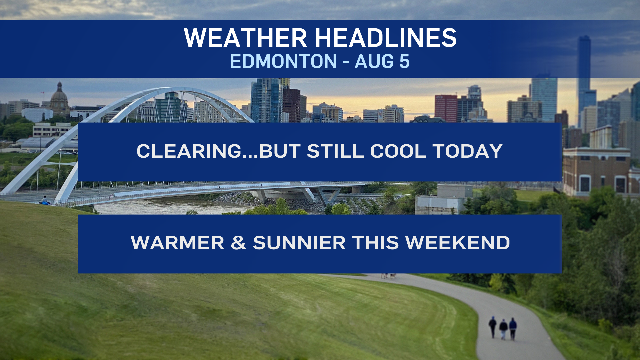 Another soggy start to the day in Edmonton and surrounding areas.

Looks like this precipitation will push out of the city by mid-to-late morning and then we'll get some sunny breaks by this afternoon.

This'll be the last rainy morning for a while in Edmonton.

Areas further south and east will hang on to the showers for a bit longer today.

But...all of central and northern Alberta should be rain-free by late this afternoon.

We get a bit of an upper ridge building in over the province through the weekend and into early next week.

So, that means more sun than cloud and a warming trend.

Temperatures will be right around average in Edmonton Saturday (high near 23 C).

Sunday-Tuesday will top out in the mid to upper 20s.

As the ridge build in, we'll see a low-pressure system drift across the north bringing some clouds and a chance of showers to parts of northern Alberta.

I don't think we'll get any precipitation in the Edmonton region. But, we'll probably get some increased cloudcover by late Saturday and for Saturday night.

That cloud should clear out early Sunday morning.

Aside from that, it's mainly sunny skies for the next few days.

Of course, we just have to get past the clouds and rain this morning first.

Breezy this morning, calmer this afternoon.

Becoming Mostly cloudy in the evening.

Sunday - A few clouds in the morning. Sunny in the afternoon.