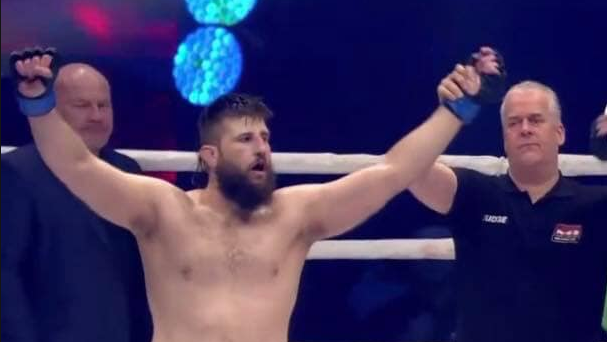 Tanner Boser has once again had a UFC fight cancelled on short notice, this time due to the coronavirus pandemic.

EDMONTON -- His latest fight postponed because of the UFC's inability to find a place to stage it due to COVID-19, Alberta heavyweight Tanner (The Bulldozer) Boser is chilling in his condo with a couple of 40-pound dumbbells, a medicine ball and skipping rope.

“I make do,” says Boser, who normally trains twice a day at the gym.

The 28-year-old from Bonnyville, Alta., who now calls Edmonton home, landed on a March 28 UFC card originally scheduled for Columbus, Ohio, when Brazilian Carlos Felipe dropped out due to visa issues, according to the UFC. Boser was to face American Jeff (Lights Out) Hughes.

The Nationwide Arena show was one of several the UFC had hoped to switch to Las Vegas - behind closed doors - but eventually had to postpone due to local restrictions on public gatherings.

So now Boser (17-6-1) is biding his time at home, offering up the occasional dry social media post.

“I'm so braindead that I can sit in my rocking chair literally all day and stare at the wall and my phone while listening to music and eating intermittently and be perfectly content,” he tweeted March 25. “I haven't even turned on Netflix yet. I'm a (expletive deleted) animal. A sloth apparently, but an animal.”

The good news is Boser was in fight shape when the COVID-19 lockdown came. And the six-foot-two 246-pounder has a sponsorship deal with MealKraft, a local meal preparation service that drops off food once a week for him.

“As long as I don't start eating like a complete dumpster, I'm going to be all right here for a little while,” he said of his fitness level.

Like the rest of us, Boser is social-distancing with the exception of his girlfriend.

“I get in the odd home workout but I don't have tons to work with here,” he said, referencing both space and equipment.

His part-time job as nightclub bouncer is also on hold. As a mixed martial artist, he's not sure whether he qualifies for any of the financial help the government has promised.

“I believe contractors are eligible for it ... I guess it's something to look into because technically that's what I am - I'm a contractor who wasn't able to work due to the coronavirus. I should be able to meet the criteria. We'll play by ear.”

Pokemon Go, a mobile video game, is keeping him busy in the meantime.

“Even though I'm stuck in my condo, I happen to live right by a PokeStop. Anybody who's a nerd in that way knows what that means.”

Boser hopes that once the UFC gets rolling again, his fight will be near the top of the list. But he also knows that he is early in his UFC career, with other more prominent names ahead of him.

Boser's UFC career has been a case of hurry up and wait.

He was slated to make his debut in the promotion at UFC 240 last July in Edmonton, only to learn two days before the fight that opponent Giacomo Lemos had failed a drug test (the Brazilian was eventually suspended for two years).

He finally got to fight last October, opening a televised UFC card in Boston with a unanimous decision over six-foot-seven Daniel (Daddy Long Legs) Spitz. In December, Boser lost a decision to French kickboxer Ciryl (Bon Gamin) Gane on a UFC card in Busan as he added South Korea to a fight resume that already includes Australia, England, Kazakhstan, Russia and the United Arab Emirates.

The Hughes matchup would have been his third bout in some five months. Instead it's back to the waiting game.

“There's lots of unpredictable scenarios that can and often do go down,” he said of the fight game. “This obviously is a complete black swan event nobody could have foreseen.”

Boser has shown he belongs in the UFC and, despite losing to Gane, had success against the chiselled French fighter with leg-kicks.

“I needed to do more of them but I wasn't able to find more of them,” he said. “I know if I could establish more leg-kicks and kind of get the rhythm going that way in my favour, that I can beat anybody. But he knew that I needed to do that and I wanted to do that and I was only able to get off a handful of good leg-kicks on him - not enough to start to bring the momentum of the fight in my favour.”

Gane, a skilled striker adept at controlling the range, landed some hard blows midway through the second round.

“They didn't rock me or anything but then it kind of snowballs,” said Boser. “He gets ahead and I have to try and catch up. I'm trying to get my leg-kicks going but it's not working. And then by Round 3, he landed some big shots on me. That's just the way she went.”

Otherwise he enjoyed the experience in South Korea, noting how respectful and engaged the fans were.

“That part was for sure enjoyable. Trying to finding food that I wanted to eat there was the part I didn't like,” he added with a chuckle.

This report by The Canadian Press was first published March 30, 2020