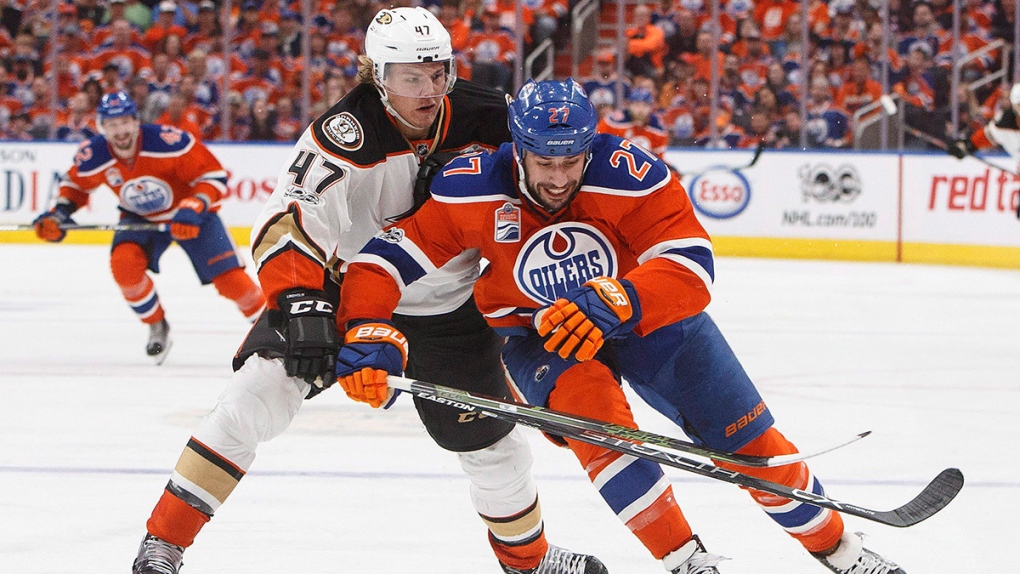 Anaheim Ducks' Hampus Lindholm (47) and Edmonton Oilers' Milan Lucic (27) battle for the puck during the second period in game six of a second-round NHL hockey Stanley Cup playoff series in Edmonton on Sunday, May 7, 2017. (THE CANADIAN PRESS/Jason Franson)

EDMONTON -- The Edmonton Oilers are forcing the Anaheim Ducks to face their Game 7 playoff demons.

Their Western Conference semifinal is going the distance after Edmonton's decisive 7-1 victory Sunday.

The winner of Wednesday's Game 7 in Anaheim meets the Nashville Predators in the conference final.

Leon Draisaitl led the Oilers with a hat trick with Mark Letestu scoring twice for the hosts. Edmonton also got goals from Zach Kassian and Anton Slepychev in front a euphoric wall of orange at Rogers Place.

Oilers goaltender Cam Talbot turned away 34-of-35 shots for the win.

Edmonton had sprinted to a six-goal lead by the first minute of the second period before the Ducks countered with a lone goal from Rickard Rakell.

The Oilers scoring three goals on their first six shots prompted Anaheim to replace John Gibson with Jonathan Bernier, who stopped 24-of-28 shots in relief.

Momentum has swung to Edmonton, while the Ducks are under pressure to reverse a trend. Anaheim has lost a Game 7 at home each of the last four years.

The Ducks were eliminated in the first rounds of 2016 (Nashville) and 2013 (Detroit), the second round of 2014 (Los Angeles) and the third round of 2015 (Chicago) in seventh games at the Honda Center.

What's more, the Ducks led each of those series 3-2 before back-to-back losses ended their seasons.

The Oilers won twice in Anaheim to open this series and narrowly lost Game 5 there in double overtime.

Edmonton's last Game 7 was the 2006 Stanley Cup final, which they lost 3-1 to the Carolina Hurricanes in Raleigh, N.C.

Rogers Place was highly sensitive to officiating Sunday given the perceived injustice of allowing Friday's tying goal to withstand a goaltender interference challenge.

The Oilers were up 3-0 and on the cusp of taking a 3-2 series lead home when the Ducks became just the second team in NHL playoff history to erase a three-goal deficit in the last four minutes of regulation.

Ducks centre Ryan Kesler had his glove on Talbot's pad when Rakell put a backhand between his pads to tie it with 15 seconds remaining. Corey Perry then scored the double-overtime winner.

So, the Oilers were a team on a mission in Game 6.

Draisaitl completed his hat trick on a give-and-go with Milan Lucic at 15:27 of the second period, when Kesler was serving a roughing minor.

On a cross-ice feed from Perry, Rakell caught Talbot out of his net to score for the Ducks at 8:56.

Slepychev extended the host team's lead to six goals 45 seconds into the period on an odd-man rush with Patrick Maroon.

Letestu put a one-timer over Bernier's right pad for a power-play goal at 18:45 of the first period.

Bernier left the puck unattended instead of smothering a rebound, which gave Letestu two swings at it with success on his second try at 11:39.

Kassian won a footrace with Ducks defencemen for a loose puck in Anaheim's zone. He shook off Josh Manson and beat Gibson with a forehand five-hole at 8:25.

Gibson was fooled by Draisaitl's no-look backhand off a feed from Milan Lucic at 7:22. Draisaitl whiffed on breakaway, but the puck had enough forward momentum to slide under Gibson at 2:45.

Draisaitl has a team-leading four goals and nine assists in the series.

Edmonton's blue line ran with reinforcements as Eric Gryba and Griffin Reinhart drew in for Andrej Sekura and Oscar Klefbom.

Sekura played less than two minutes in Game 5 because of an apparent leg injury. Klefbom took a shot in the chest and missed half a period, but returned to that game.

Klefbom left warmup early Sunday and was replaced in the lineup by Reinhart.