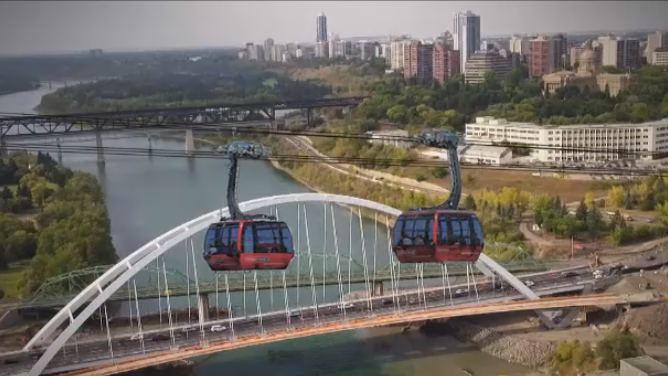 A rendering showing gondola cars along the proposed development in the river valley by Prairie Sky (Supplied).

Edmonton City Council decided to halt the Prairie Sky Gondola project for the time being.

On Monday, councillors voted 12-1 to receive the land agreement with the company proposing the gondola only as information and not to approve the lease of city land for the project.

Coun. Karen Principe was the lone vote against receiving the proposed Prairie Sky Gondola land agreement as information only.

Prairie Sky could revisit the proposal but would need to present additional information to mitigate councillors' concerns with the project.

The company wanted to build a 2.5-kilometre gondola from downtown to Old Strathcona, with no taxpayer money contributing to the project.

Several community members told council last week they were concerned about the project's potential impact on the river valley and land considered sacred by Indigenous Peoples at Rossdale Flats.

Jeffrey Hansen-Carlson, Prairie Sky Gondola CEO, said in a statement that the company is "not deterred" by council's decision.

"Maybe it's time The Edmonton Project is revived," Hansen-Carlson said. "The city needs more big ideas for people to believe in and more empowered city builders daring to do them.

"We're proud of what we did and we're excited to explore what we can do next."

A NEW STANDARD FOR INDIGENOUS CONSULTATION

Coun. Anne Stevenson brought forward the motion to receive the land agreement proposal as information only.

Stevenson said she was initially skeptical of the project, but came to view it as "an exciting idea" and "homegrown Edmonton initiative."

"As we've gone through this process, though, it's become apparent that there are far broader considerations and implications of this project, particularly given the Indigenous importance of the Rossdale site," she added.

After hearing from concerned community members about the history and meaning Rossdale holds to Indigenous Edmontonians, Stevenson said the city has work to do to advance reconciliation there and on other projects.

"It's incumbent upon ourselves that we hold ourselves to the same standard that we've been discussing in regards to the gondola," she said.

For Coun. Sarah Hamilton, there still remains other ways to intimately experience the city and river valley, like the High Level streetcar.

"The city doesn't need to have another infrastructure project that doesn't live up to the public's expectations, private or publicly funded," Hamilton said.

"We also, I think, have a transit system, that we are trying to bring up to public expectations, and I've always thought that, I was concerned that this (gondola) conversation detracted a little bit from the necessary improvements that we need to make to our transit system," she added.

Mayor Amarjeet Sohi said there was a "lack of clarity" on the project's business case and the risks for the city, including the environmental impact on the river valley and what would happen to the gondola infrastructure if Prairie Sky went bankrupt.

"I think those could have been resolved, maybe, if we had gone to the next stage (of the project)," Sohi said. "But one thing for me is fundamental, which is a make and break on this, which is the lack of authentic engagement with Indigenous communities."

Sohi added that while the city did not grant approval for the project at this time, Edmonton is still open for business for innovative projects.

"Receiving this for information provides clarity for future investments that this expectation here from Edmontonians that we want to live our value on reconciliation with Indigenous communities."

Hansen-Carlson said Prairie Sky was "unequivocally committed to Edmonton and all of its residents."

"Truth and Reconciliation are not mere words," he added. "We wholeheartedly believe those words must be a priority. And this was our intentional all along and it will be forever."

What each province, territory is doing on National Day for Truth and Reconciliation

Friday is the second annual National Day for Truth and Reconciliation, also known as Orange Shirt Day. The federal government made Sept. 30 a statutory holiday for its workers and federally regulated workplaces last year.

On this National Day of Truth and Reconciliation, a recent investigation into the death of a 32-year-old Indigenous man is a stark reminder of the ongoing struggle for justice that continues to elude the Ojibways of Onigaming First Nations.

Russian President Vladimir Putin signed treaties Friday for an illegal annexation of occupied Ukrainian territory in a sharp escalation of his seven-month invasion of Ukraine. Its leader immediately countered with a surprise application to join the NATO military alliance.

The Conservatives' cheeky term for inflation under the Liberals has got some MPs into trouble in the House of Commons, where saying 'Justinflation' has been deemed verboten.

A revived Hurricane Ian set its sights on South Carolina's coast Friday and the historic city of Charleston, with forecasters predicting a storm surge and floods after the megastorm caused catastrophic damage in Florida and left people trapped in their homes.

Ceremonies, marches and other gatherings are taking place across the country today as communities mark the National Day of Truth and Reconciliation.

Memphis teacher Eliza Fletcher died from a gunshot wound to the back of her head, autopsy reveals

Eliza Fletcher, the Memphis teacher who was abducted while on an early morning jog earlier this month, died from a gunshot wound to the back of her head and blunt force injury, according to an autopsy report.