Edmonton woman safe after being taken hostage by bank robber

An Edmonton woman taken hostage by a bank robber in the Killarney neighbourhood on Monday is safe after negotiators secured her release late Monday afternoon.

According to the Edmonton Police Service (EPS), a 36-year-old man fled a bank robbery in the area of 97 Street and 127 Avenue late around 1:30 p.m.

He then entered a home in the area of 83 Street and 130 Avenue he was not associated with, took one woman hostage, and barricaded himself, EPS says.

Around 5:30 p.m., police say negotiators were able to secure the release of the hostage. EPS said that half an hour later, officers entered the residence and found the man had died.

In a media update, Insp. Keith Johnson, on-scene critical incident commander, said that a tracker with some of the money stolen from the bank gave officers real-time location updates on the robber's whereabouts.

"A vehicle and a suspect was located very quickly, and at that point, a foot chase actually ensued," Johnson said. "The robbery suspect burst into a residence.

"At that point, containment was immediately set-up," he added.

Johnson said that alongside crisis negotiators, a mental health professional and tactical officers responded to the incident.

"The main mission that we always have in these situations is that we want to continue to negotiate the safe release of our hostages and safe surrender of the suspect," Johnson said.

When the hostage was released, police believed there were more in the home, Johnson said. He added that information from the woman taken hostage and negotiators led police to have concerns about the mental wellbeing of the suspect.

"At that point, we authorized what we call a medical rescue, and we did enter the bedroom (of the home)," Johnson said. "The male subject was found deceased in the bedroom."

No force was used during the duration of the hours-long incident, Johnson said. 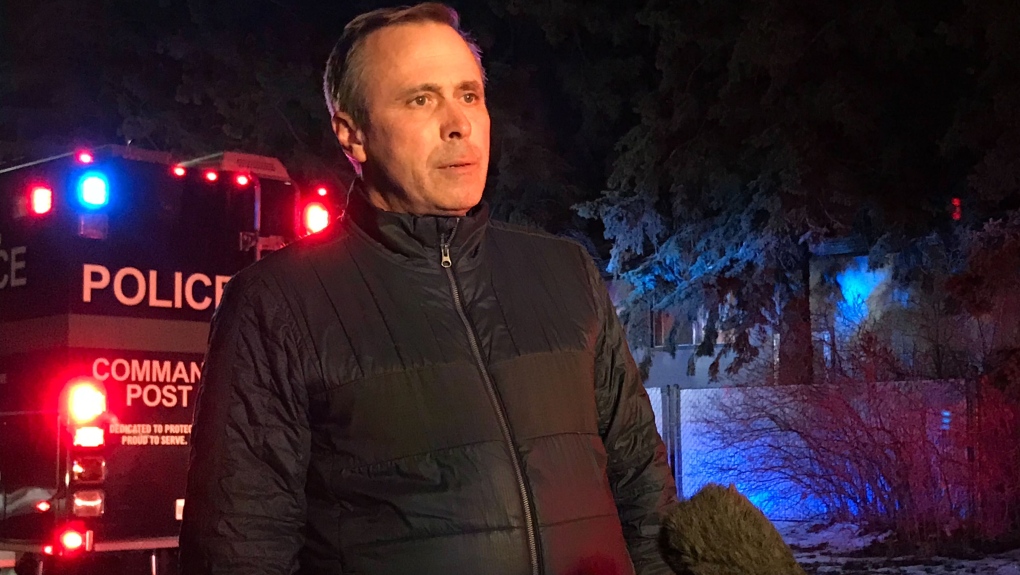 Insp. Keith Johnson provides reporters with an update on how the hostage situation was resolved (CTV News Edmonton/Sean McClune).

When asked if this type of incident happens often, Johnson said a random hostage-taking like this is unique.

Despite that, Johnson stressed that the actions taken by police helped ensure the situation was under control.

According to police spokesperson Cheryl Voordenhout, the Alberta Serious Incident Response Team was notified of the death and determined that the investigation into the incident will remain with the EPS.

The investigation into the events leading to the hostage-taking continues.

The incident has shaken a neighbour who worries about what might have happened if the man had entered her home.

“I’m a single mom, I’ve got a little boy, I don’t feel safe,” said Amanda, a neighbour. “What if he (her son) was outside yesterday playing and that vehicle came through and hit him?”

She’s also worried about the mental impact this will have on the woman who was taken hostage. According to EPS, the hostage suffered serious but non-life-threatening injuries.

“He’s traumatized her for the rest of her life now… and everybody else around here that was scared that had kids,” Amanda added. “It could’ve been anybody’s house, it could’ve been mine... and it could have been a house full of kids.

“You think you’re in a safe area but you’re not safe anywhere, to be honest with you, you’re not.”