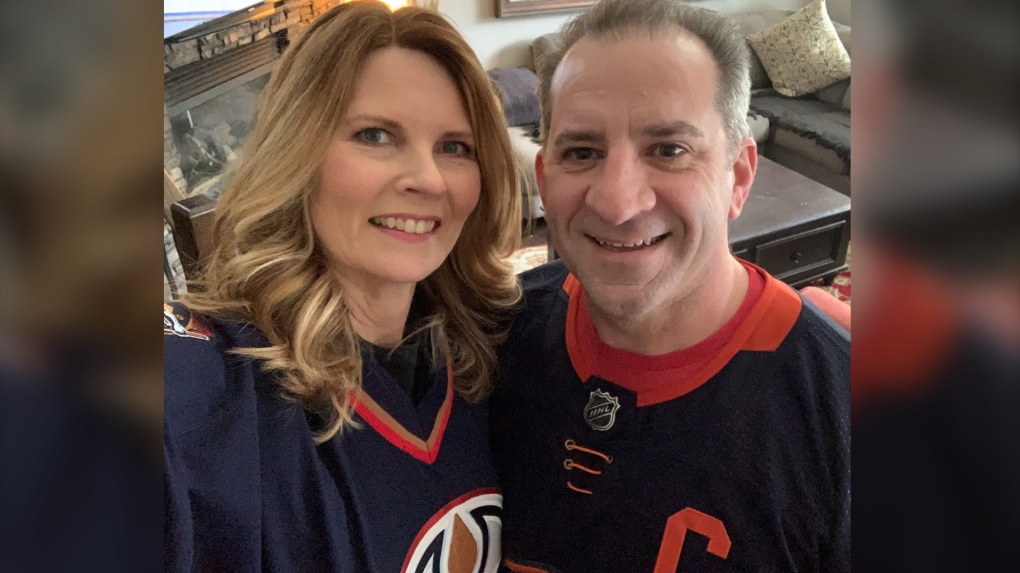 CTV News Calgary at 6 Anchor Tara Nelson and her husband wear Oilers jerseys as part of the Battle of Alberta friendly wager between the two stations (Source: Tara Nelson/Twitter).

With the Edmonton Oilers eliminating the Calgary Flames in the Battle of Alberta, CTV News Edmonton and Calgary 6 p.m. anchors stayed true to their friendly bet.

When the Battle of Alberta first began, the anchors agreed to the friendly wager as they watched the second-round series.

"What do you think Tara Nelson, should we get a fun little wager going on who takes the series," asked CTV News Edmonton 6 p.m. anchor Erin Isfeld.

The pair agreed that the anchor from the city who lost the series would have to wear a jersey of the opposing city and make a donation to that city's food bank.

On Friday afternoon, CTV News Calgary 6 p.m. anchor Tara Nelson posted a photo to Twitter as she wore an Edmonton Oilers jersey and said she would happily make a donation to the Edmonton Food Bank.

Congratulations @ErinIsfeldCTV & @EdmontonOilers ~ taken in my husband’s jerseys last night!! I shall also happily make a donation to @yegfoodbank ~ quite a series! @CTVCalgary @ctvedmonton pic.twitter.com/dBGZGZXlKz

"Congratulations Erin Isfeld and the Edmonton Oilers," Nelson said. "Quite a series!"

"You are a great sport Tara Nelson," Isfeld replied. "The Battle of Alberta was so fun to be part of in our own little way!

"The orange and blue of the Edmonton Oilers looks good on you!"

Three months since their arrival through a special evacuation program, Ukrainian families with children receiving care in hospital share their experience.

Two people are injured and a third is in custody after what RCMP describe as a 'public shooting' at a rodeo in Northern B.C. Sunday.

Amid buzz around the medical benefits of magic mushrooms, a new production facility gets to work in B.C.

In southern B.C, there's a new 20,000-square-foot production facility where one particular product is generating a lot of buzz: magic mushrooms, which a handful of businesses have been federally approved to produce.

Ohio man shot was unarmed when shot by officers: police

A Black man shot and killed by Akron, Ohio police officers in a hail of bullets following a vehicle and foot pursuit was unarmed at the time of the shooting.