For nearly half his life, Erik Smith has been a marked man. Tattoos cover his arms and neck, he bears a satanic cross on one temple, and “13 1/2” is etched into his left cheek.

But it’s the ink under his shirt that holds the most meaning: a massive eagle stretching from his waist across his ribs, and up to his neck. 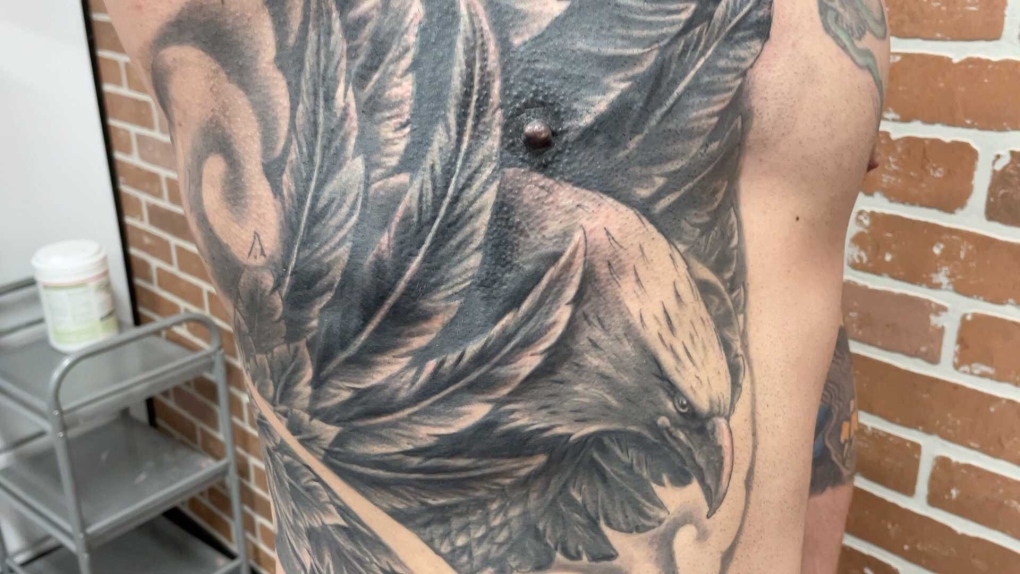 “When I see this I see freedom from the old lifestyle,” Smith said while examining the finished product in a mirror at The Fountainhead Tattoo.

He searches for the words. "Obviously I know what I feel in my heart right now and like, I’m... so overjoyed.”

The eagle covers old tattoos from Smith’s past life as a Neo-Nazi. For more than a decade, a dark black swastika, “SS” bolts and the words “white power” were inked into the skin. He was 17 years old when he got the swastika.

Smith remembers having trouble making friends at school. He acted out and eventually wound up in foster care.

“I came from a middle-class family. ... [My parents] did the best that they could with a rebellious kid,” Smith recalled.

While in foster care, he found a group of people ready to accept him for all the wrong reasons. He joined a gang, began selling drugs, and developed a hatred for those who were different than him.

“It happens a lot quicker than you think,” Smith said. “When somebody of colour did something wrong to me, it solidified my beliefs.” 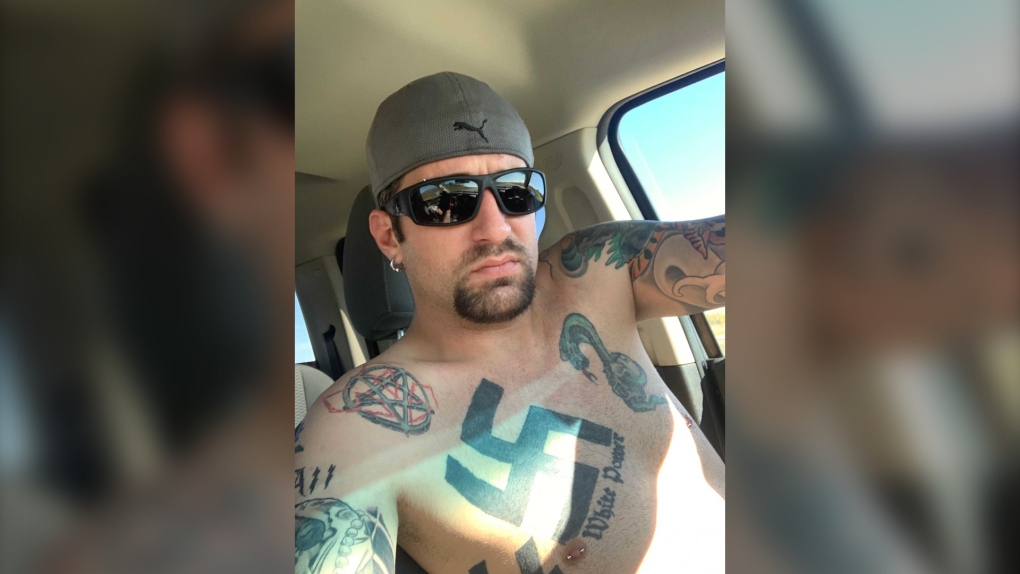 While in foster care, Erik Smith found a group of people ready to accept him for all the wrong reasons. He joined a gang, began selling drugs, and developed a hatred for those who were different than him. “It happens a lot quicker than you think,” Smith said

Racism and white supremacy became a part of his identity; a unifying hate, cultivated by his environment.

Gang life landed him in the Edmonton Young Offenders Centre multiple times as a teen. Eventually drug running and clashes with rival gangs caught up with him as an adult. He spent two years in the Calgary Correctional Centre on a 2009 conviction, then the big one in 2015.

“I pulled up beside someone and pulled a gun on them, and you know, that’s what landed me the seven years.”

He started serving his sentence at Bowden’s Federal Penitentiary, and says that time in prison was a wake-up call. Slowly but deliberately, Smith committed to ridding himself of his deeply engrained racist beliefs. Eventually his fellow inmates recognized his efforts, and some even looked past his tattoos.

“If guys wouldn’t have taken a chance on me, nobody would have really seen the changes that I was trying to make in my own life.”

In late 2019, Smith got out on parole. Determined to stay on the straight and narrow, he got an apartment and a job as a foreman for a roofing company. Then, in June 2020, a miracle.

“I remember when I first saw the post. I was up on a roof and I had to sit down because I couldn’t believe what I just read.”

“The post” was on local tattoo artist Shan Claydon’s Instagram. Inspired by widespread Black Lives Matter and anti-police violence protests in the wake of George Floyd’s murder, Claydon was offering to cover up racist or gang-related tattoos free of charge.

“When everyone was posting about Black Lives Matter and stuff like that but not taking any action I was like well... I wanted to do this anyways,” Claydon told CTV News Edmonton. 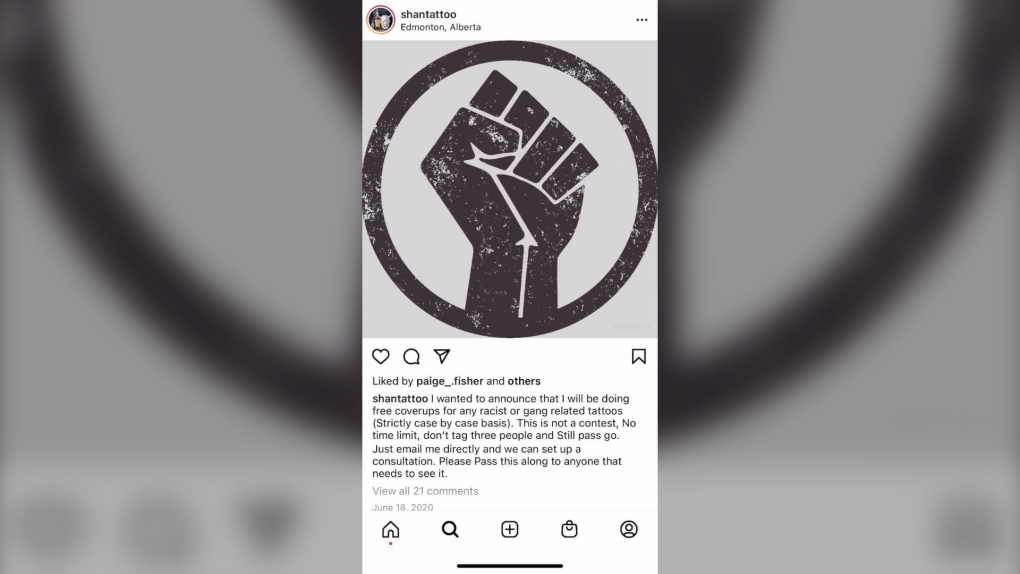 Shan Claydon, artist at Edmonton shop The Fountainhead Tattoo, inspired by the Black Lives Matter and anti-police protests in the wake of George Floyd's murder, offered to cover up racist or gang-related tattoos for free.

The two met up, agreed on the eagle cover up, and over the course of the next six months Claydon went to work in multiple lengthy sessions totalling more than 30 hours. The part of Smith's chest with the swastika had already been gone over with a needle four or five times over the years by the time Claydon started the eagle design.

“With bad cover ups, the skin’s kind of chewed up a bit more,” Claydon said. “A little bit of scar tissue mixed in with that too.”

“It hurts,” Smith admitted. “But like all the pain that I’m getting right now, like I deserve it. Hundred percent, I deserve it.”

In December 2020, the second wave of COVID-19 in Alberta forced personal services to close, interrupting the tattooing process. The eagle was finally complete in February.

“I wish there was something I could do for him. He’s done so much for me.”

“Just seeing how positive it can be to actually do something like this is like really rewarding,” Claydon told CTV News Edmonton.  “To help somebody past that and find their own individuality is... I think what tattoos are kind of all about.”

Smith knows a new coat of paint can’t change his past, and he’s not seeking forgiveness from others, though he is starting to forgive himself. He still has to fight off racist thoughts sometimes, but he’s keeping his head down, is supported by a small group of close friends, and has a three-year-old pit bull Rex to keep him company.

Watch part two of this story on CTVNewsEdmonton.ca on Friday, June 17.​

Dozens of Florida residents left their flooded and splintered homes by boat and by air on Saturday as rescuers continued to search for survivors in the wake of Hurricane Ian, while authorities in South Carolina and North Carolina began taking stock of their losses.