'I have no one but myself to blame': McKnight speaks as Crown pushes for 22-year sex assault sentence 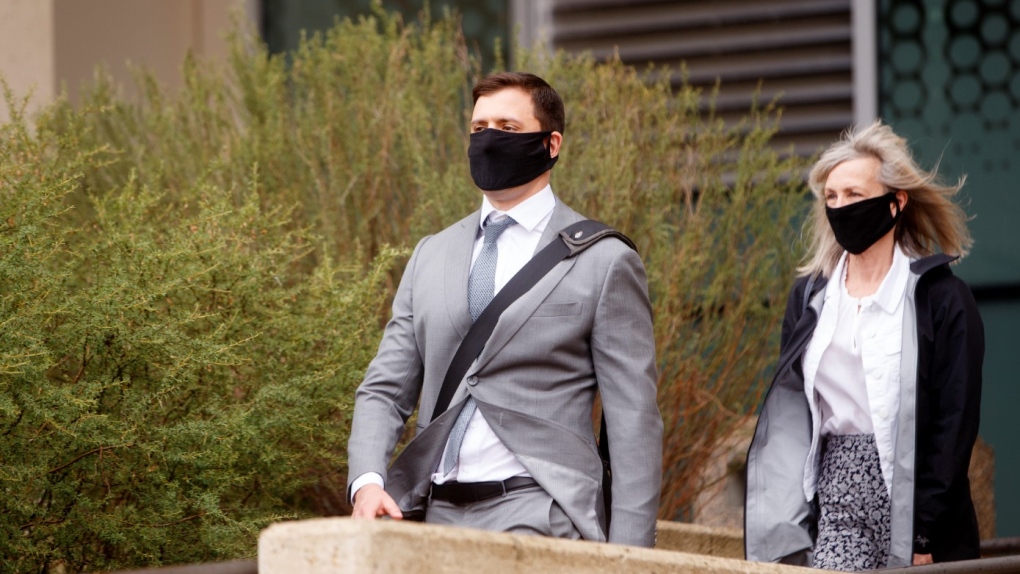 Matthew McKnight and his mother walk out of court during a break in Edmonton on Wednesday, July 8, 2020. McKnight, 33, was accused of sexually assaulting 13 women ranging in age from 17 to 22 between 2010 and 2016. THE CANADIAN PRESS/Jason Franson

Crown prosecutors continued their push on Friday for a 22 1/2 year sentence for an Edmonton nightclub promoter convicted on five counts of sexual assault.

Friday marks the seventh day of sentencing proceedings in Alberta's Court of Queen's Bench for what was initially scheduled to be a three-day hearing. Sentencing is scheduled for 2:30 p.m. on July 31.

McKnight addressed the court near the conclusion of the hearing that ran into Friday evening.

“I know that many people think me to be an unfeeling monster but that is not the case at all. My heart is bursting, and I feel like absolute garbage for making people feel that way,” he said. “While I stand by my testimony at this trial, I recognize that I have no one but myself to blame for the situation I find myself in.”

“In addition to losing my career, my home, my reputation, and my liberty over these last four years, I’ll now lose my freedom completely, and I am extremely repentant.”

Prosecutor Mark Huyser-Wierenga challenged the defence's sentencing argument of between just under five and nine years.

"Five rapes against five young women and the bottom line sentence that is proposed as fit and appropriate is less than five years," he questioned.

Huyser-Wierenga also argued that there's been no evidence detailing the psychology behind what he termed McKnight's "troubling pattern of abuse."

"We have no understanding of why Mr. McKnight raped five women over six years," he said.

Huyser-Wierenga also challenged the defence's assertion that as a young, first-time offender McKnight had strong prospects of rehabilitation.

"Where's the evidence for that?"

He also noted that a 22 1/2 year sentence doesn't necessarily equate to the same amount of time in an institution given  statutory release and parole regulations.

In earlier submissions, prosecutors told Judge Doreen Sulyma she has a "unique opportunity to denounce and deter" McKnight's crimes.

In his sentencing submissions, defence lawyer Dino Bottos argued that the Crown had "lost perspective in this case."

Bottos presented six factors he says should mitigate McKnight's sentence, including what he termed the vigilante justice McKnight suffered in a 2016 beating from his cellmate at the Edmonton Remand Centre

The Crown has argued the beating should have no effect on the sentence, saying McKnight could've asked the guards for protection but didn't.

Bottos also noted what he called an "inordinate" amount of public condemnation as well as how McKnight was a first-time offender, had strong family support and had complied with his bail conditions for nearly four years.

Bottos has also argued McKnight's five convictions should not all carry equal weight in sentencing.

Others told the court they still suffer from anxiety, panic attacks and nightmares following the assaults.