EDMONTON -- A strip of trees has been cut down in the river valley at a popular viewpoint, and while some residents appreciate the new view, the city says the cutting is illegal and recurring.

The view in west Edmonton neighbourhood Valleyview is nearly unobstructed now, but it hasn't always been that way.

"From there [a distance] you're like, 'Oh, they cut down the trees, it looks so nice.' But you come up and you're like, 'What is this?'" said Inga Olu-Jordan, who regularly bikes through the area.

Passersby who take a path closer to the ravine can see the stumps of trees that were haphazardly cut. 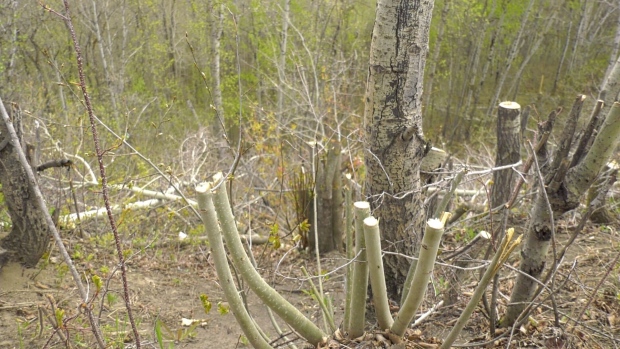 "It's mind boggling that someone would take actions like this, where they're cutting down trees in our river valley," said Ward 1 Coun. Andrew Knack.

A video showing the destruction was posted to twitter, with Mayor Don Iveson replying 'not cool' — confirming the cut was not city approved.

Hey @doniveson @yeg311app, what’s up with this tree removal in Valleyview? This legal? Those million dollar homes just helped themselves to a million dollar view. Gross. @CityofEdmonton #yeg #ableg pic.twitter.com/2FYo7Al1N1

Knack was tipped off about a month ago, calling the tree cutting a "troubling pattern."

In 2017, lab results found many trees in the area had been poisoned with Round-Up. Before that, in 2014, $19,000 worth of damage was done to the same stretch of trees that was hit this time.

There are signs posted in the area warning would-be tree trimmers it's against the law.

But some residents aren't bothered by the new view.

"I think it's a wonderful idea to be able to see our city," said Valleyview resident Peggie Stevens.

But it's not all about aesthetic, says Knack.

"This affects bank stability, so that is the most serious part of this all."

The person responsible for cutting down the trees could face jail time or up to a $10,000 fine. The city is asking anyone with information to call 311.