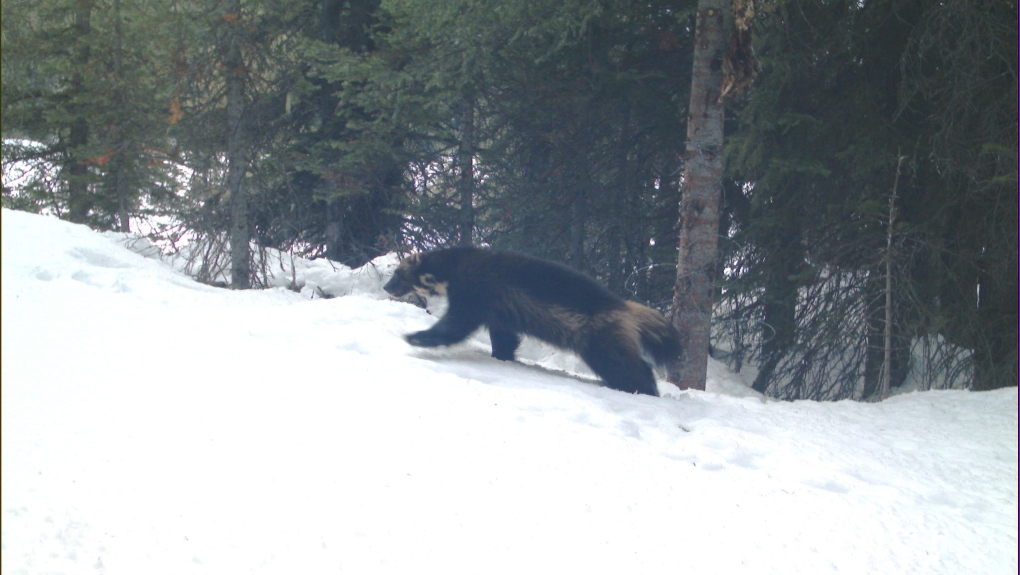 A wolverine is shown in this camera trap photo in Alberta from 2012, in the same location where a coyotes was also photographed a week apart, supplied by lead researcher Gillian Chow-Fraser of the University of Victoria. New research suggests industrial development is helping coyotes move into wolverine country and edge out the rare carnivore despite its fierce reputation. THE CANADIAN PRESS
EDMONTON -

Industrial development is helping coyotes move into wolverine country and edge out the rare carnivore despite its fierce reputation, newly published research suggests.

“Roads and seismic lines were actually driving competition between wolverines and coyotes,” said Gillian Chow-Fraser of the University of Victoria, lead author of the paper published in the journal Biological Conservation.

Chow-Fraser said it's another example of how human activities on a landscape have far-reaching consequences for all the animals living on it.

“We see them changing the animal community in all sorts of ways.”

Chow-Fraser, her university colleagues, and the Alberta government examined data from 154 camera traps collected in 2006-08 and 2011-13 from two areas of the province - the relatively untouched Willmore Wilderness Area and Kananaskis Country, which is heavily laced by roads and cutlines from forestry, energy and recreational development.

Altogether, the study analyzes data from 2,790 weeks of camera deployment.

But, as development clears pathways into the boreal forest and foothills of the Rockies, now they do.

“It was increasing the odds they co-occur in an area,” Chow-Fraser said.

The data showed that on a road or cutline, the two animals were three times more likely to show up at the same spot within a week of each other than elsewhere.

Wolverines are fierce beasts and Chow-Fraser doesn't suggest coyotes are beating them fang-to-fang. It's more a case of coyotes, with their superior numbers, using up resources wolverines could once count on for themselves and their kits.

“We're talking about a competition for resources or space,” she said. “There's a lot of coyotes and they're outcompeting wolverines in these places where there's high density of linear features.”

Other predators such as wolves, cougars or bears aren't the problem, Chow-Fraser said. Those animals feed differently and don't compete with wolverines.

Wolverines are considered a “data deficient” animal in Alberta. The province's most recent population estimate - now 20 years old - is fewer than 1,000 animals.

“The Alberta population is considered to be declining at an unknown rate,” says Alberta's fact sheet on wolverines.

A 2020 study by the Alberta Conservation Association for the provincial government concludes there are no “robust” population estimates for wolverines across the vast majority of its habitat.

“In 2022, Environment and Parks will be reviewing new information and data available on wolverines to determine if an updated status evaluation should be conducted,” said department spokesman Jason Penner.

Federally, wolverines have been listed as a species of special concern since 2014. That status under the Species At Risk Act doesn't compel governments to develop a recovery plan for the animal.

“There really needs to be a reassessment of wolverine numbers in Alberta,” Chow-Fraser said. “We definitely need to start taking the status of wolverines more seriously.”

The study shows how human intervention on a landscape creates new circumstances that change how species have interacted for millennia. Chow-Fraser compares the wolverine situation to that of caribou, now suffering from wolf predation because roads and cutlines have opened the way into the deep forest.

“We need to think about how industrial development is fundamentally changing the wildlife community.”

This report by The Canadian Press was first published Jan. 19, 2022.

After 3 months of war, life in Russia has profoundly changed

Three months after the Feb. 24 invasion of Ukraine, many ordinary Russians are reeling from those blows to their livelihoods and emotions. Moscow's vast shopping malls have turned into eerie expanses of shuttered storefronts once occupied by Western retailers.

Justice Mahmud Jamal sat down with CTV National News' Omar Sachedina for an exclusive interview ahead of the one-year anniversary of his appointment to the Supreme Court of Canada. Jamal is the first person of colour to sit on the highest court in the country, bringing it closer to reflecting the diversity of Canada.

China is trying to navigate its biggest coronavirus outbreak without a tool it could have adopted many months ago, the kind of vaccines that have proven to offer the best protection against the worst outcomes from COVID-19.

Death toll from Saturday's storm hits 10 across Ontario and Quebec

As the death toll related to the powerful storm that swept Ontario and Quebec on Saturday reached 10 on Monday, some of the hardest-hit communities were still working to take stock of the damage.

'Too many children did not make it home': Anniversary of discovery at Canada's largest residential school

It's been a year since the announcement of the detection of unmarked graves at the site of what was once Canada's largest residential school – an announcement that for many Indigenous survivors was confirmation of what they already knew.

Walk out at trade meeting when Russia spoke 'not one-off,' says trade minister

The United States and four other nations that walked out of an Asia-Pacific Economic Cooperation group meeting in Bangkok over the weekend underlined their support Monday for host nation Thailand, saying their protest was aimed solely at Russia because of its invasion of Ukraine.

19 charged, including 10 minors, after violent night at Toronto beach

Police say they’ve made 19 arrests and seven officers were injured after a violent night at Toronto’s Woodbine Beach that saw two people shot, one person stabbed, two others robbed at gunpoint and running street battles involving fireworks through Sunday evening.

A theory that the recent outbreak of monkeypox may be tied to sexual activity has put the gay community in an unfortunate position, having fought back against previous and continued stigma around HIV and AIDS, an LGBTQ2+ centre director says.

Hydro Ottawa says the damage from Saturday's storm is "simply beyond comprehension", and is "significantly worse" than the 1998 ice storm and the tornadoes that hit the capital three years ago.