'It's like having a puppy': This Alberta family has a pet...goat

EDMONTON -- A couple from rural Alberta tend to garner a lot of attention when they take their pet out for a leisurely stroll.

“We live in Alcomdale, and we’ve got a goat,” Gary Larter, Dill’s owner, laughs.

About two years ago, Rebecca Vincent, Dill’s other owner asked Larter if they could get a pet goat.

“He said yes…well I rolled with it,” she chuckled.

“I wouldn’t have thought we would have a goat,” Larter added, calling the decision “a heads-or-tails kind of moment.”

It's also a decision some other residents may not be able to make, as bylaws regarding goats -- classified as livestock -- can vary from municipality to municipality.

As Vincent explained, the couple is allowed to have Dill due to the size of their property in the hamlet northwest of Edmonton, but needs special permits.

“We didn’t know what we were getting into, but he’s pretty special,” she said.

“He’s got a heck of a personality.”

According to Vincent, Dill is house trained. She told CTV News Edmonton training a goat is similar to training a puppy.

“They’re really smart. He understands the tone of my voice. If I growl, he stops. If I grab the water bottle, he stops. He knows the words no, pee and poop. It’s like having a puppy.”

CARING FOR A GOAT

Shannon Skulmoski, a member of the Canadian Goat Society, added they are a “mischievous, very happy little animal.”

According to Skulmoski, if you’re planning to get a goat it’s important to do the research as feed is different, and finding a goat-centric veterinarian is hard to come by.

“They’re not tin can eating; they need specific nutrition. I wouldn’t say it’s more excessive than a dog or cat, it’s just different.” 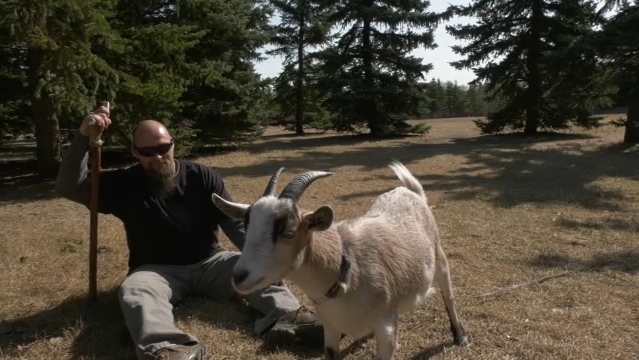 “He doesn’t need to be on a leash when he’s with my husband because he can’t get within 10 feet and the goat follows,” she said.

‘THEY NEED ANOTHER COMPANION’

Skulmoski told CTV News Nigerian Dwarf goats are very adaptable and while they are a herd animal they typically work best in pairs.

“They don’t typically do well by themselves, they need another goat companion,” she explained.

Vincent and Larter do have a cat, but said the pair aren’t particularly fond of each other.

“We named them together, they’re Dill and Pickle,” Vincent laughed. “But they don’t like each other much.”

“The cat hates me,” Larter added.

So when asked if they would get another goat for Dill, Larter responded, “Only time will tell.”