'It was a nightmare': Edmonton couple stranded in Kelowna after stolen ID

'It was a nightmare': Edmonton couple stranded in Kelowna after stolen ID

An Edmonton man is looking for a refund – and some answers – after getting stranded in Kelowna after his girlfriend’s ID was stolen.

Eric Grouse was on vacation in B.C. with his girlfriend, Roxanne Manuel, and her 15-year-old daughter. The day before their flight home, Manuel’s wallet, with her ID and all the family’s bank cards, was stolen.

Grouse said they contacted Flair Airlines and told them Manuel only had pictures of her birth certificate, health card and Métis status card. He adds that the representative initially said only original documents would be allowed, but after explaining the situation, he was given the OK.

They went early to the airport to make sure, said Grouse, but were told at the ticket counter Manuel couldn’t board. He said the agent gave them no information on how they could find a solution, she just said no.

After checking with Air Canada, who Grouse said told them a police report and the photos they had would be enough to board with them, the family filed a police report and returned, but the Edmonton man said they were told no again. He said they called Flair, and a different agent told them it was the ticket agent's choice to accept the documents, but even after having the two representatives speak, Manuel was turned away again.

“It was confusing,” Grouse said. “Everything that they were saying was being contradicted by their own– the next thing they say. It made no sense to me.”

In an email, a Flair Airlines spokesperson told CTV that all passengers have to follow Canadian federal guidelines for identification, which are also posted on the airline’s website.

“It is really unfortunate that our passengers lost their wallet and identification on their travels.” Flair said, but gate agents do not have leeway to override the regulations. CTV asked Flair what passengers should do if their ID is stolen or missing, but the airline has not yet responded.

Grouse said they had no money and nowhere to go, and the airline didn’t offer to help, so they sent Manuel’s daughter on the plane to head home alone.

“She had panic attacks, anxiety through the roof,” said Grouse. “But she did it for us, because we didn’t want her on the streets with us in Kelowna.

“It was a nightmare.”

Grouse said the couple spent the night roaming the streets of Kelowna with their luggage in tow before they were able to arrange a car through his work. He said they’re asking for a refund, but they also want to warn people that they may be left unprotected when things go wrong. 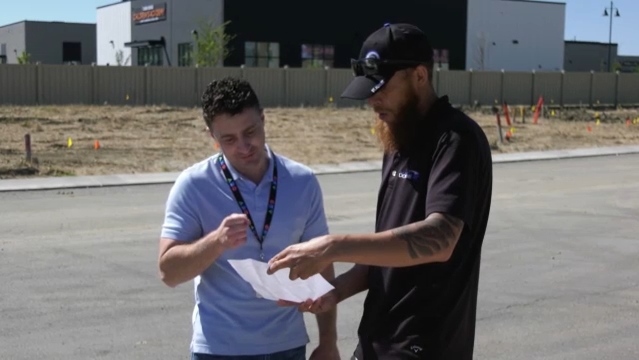 Eric Grouse (right) tells Joe Scarpelli a police report wasn't enough to convince Flair airlines to let his girlfriend board with pictures of her documents after her wallet was stolen. (CTV News Edmonton)

“It’s really one of the disastrous situations that I dread one day will happen to someone who I care about,” Lukacs said.

He adds that Canadian law does allow for alternative ID to be used along with a police report, but they have to be physical copies.

“I very much feel for the passenger, and the one thing for which the airline should be held liable is for giving them wrong information on the phone,” Lukacs said. “That’s something that I have a concern about.”

If someone does have their ID stolen or lost on a trip, it’s best to have original documents sent over as soon as possible, said Lukacs. In international cases, an embassy can help with a missing passport, but there isn’t really anything anyone can do in Grouse’s case other than have the documents sent over.

Terms and conditions vary between airlines, so Lukacs can’t say whether Grouse will get his money back, but he said the conflicting information he was given is the best grounds for a refund. coming Grouse’s way. He adds that the misinformation will be the best bet to secure a refund.

“Had he been given the right information, he would have been able to take a different course of action.

“That’s the only leg he can stand on.”

Nearly a year after a mandatory COVID-19 vaccination policy was implemented for the Canadian Armed Forces, 299 members have been kicked out of the military because they refused to get vaccinated.

The owner of the Vancouver Canucks has responded to bombshell allegations that he abused his children, which were heard during a family court proceeding this week.

How some organizations are reducing food waste and saving Canadians money

Millions of tonnes of edible food are being thrown away, a problem some organizations are trying to prevent through programs aimed at reclaiming food and giving it to Canadians at a lower cost.

Gov. Gen. Mary Simon placed tobacco Wednesday on the graves of some of the people who died in a stabbing rampage on the James Smith Cree Nation earlier this month.