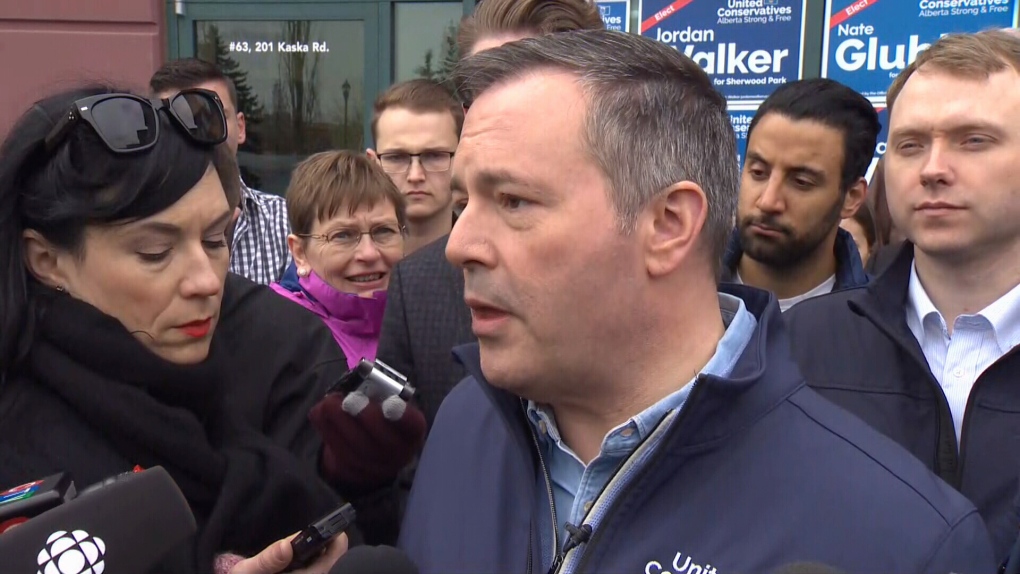 At a UCP rally the day before the election, party Leader Jason Kenney addressed for the first time the police raid of a Calgary UCP candidate's business.

UCP Leader Jason Kenney spoke about the RCMP raid of a conservative candidate’s Calgary business for the first time on Monday, the eve of the Alberta election.

“I’ve learned nothing more than what I’ve read in the media,” Kenney told reporters at a rally in Sherwood Park.

Last week, RCMP searched an auto-repair shop owned by UCP candidate for Calgary-East Peter Singh. Singh told CTV News he is innocent and that the items had been returned.

In December, he was accused of credit card fraud in the course of his nomination campaign. An internal party investigation concluded nothing was wrong. The RCMP continue to investigate allegations the UCP ran a "kamikaze" campaign to defeat Brian Jean in the party's 2017 leadership race, but have not explained why Singh's business was searched.

Kenney said he was unaware of any accusations against the candidate, and that it was his campaign team, not Kenney, who had spoken to Singh.

When asked if he was interested in knowing more about the police raid, Kenney replied, “I would be, if there’s more information. But there’s not.”

In a statement to CTV News, RCMP said they could not "disclose the reason for the search as the warrant is sealed."

Kenney also addressed other issues that have plagued the last days of his election campaign, including a robocall that allegedly impersonated Alberta Party Leader Stephen Mandel. Kenney simply referred to one case of a person mistaking the Mandel call for a message by Stephen Harper, and said the UCP was willing to corroborate the receiving phone number as one from the Harper call list. As for the scandal surrounding the 2017 UCP leadership contest, Kenney only said he has not seen the audit of the campaign and that he wasn’t sure if it would be made public.

"I think Mr. Kenney needs to address some of these issues," MacEwan University political scientist Chaldeans Mensah said. "Even if he's successful, they will continue to dog the party in the post-election scenario."

The rally was one of several UCP events planned for the capital region ahead of Tuesday’s vote.

“If you’re not yet decided, here’s the choice,” he told supporters. “Tomorrow you can choose a government that has the worst economic record in Alberta modern history, or you can choose a government that will be obsessed with creating jobs, that has a detailed plan to bring investment back to Alberta, that will create at least 55,000 new full time private sector jobs with our job-creation tax cut.”

While reiterating the UCP’s focus on jobs, pipelines and the economy, Kenney coloured the NDP’s term as an alliance between Prime Minister Justin Trudeau and Premier Rachel Notley, adding that he would endorse conservative leader Andrew Scheer in October's federal election.